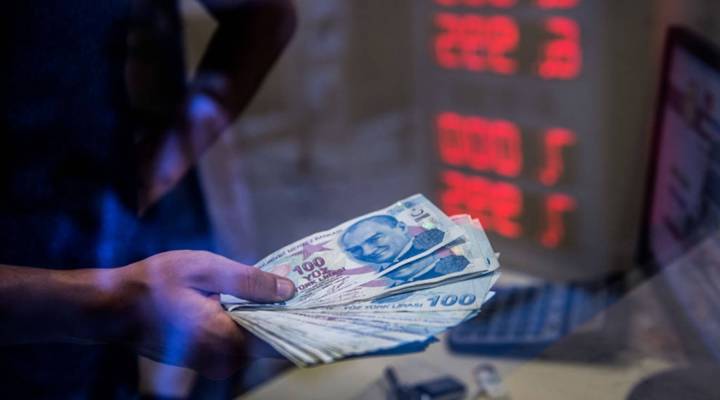 This article was updated on Aug. 14.

Turkey’s currency fell to a new record low today. Year to date it’s lost almost half its value, leading some investors and lenders inside and outside of Turkey to lose confidence in the Turkish economy.

President Recep Tayyip Erdoğan installed his son-in-law as head of the Turkish central bank, reducing its independence. The central bank now refuses to raise interest rates even though doing so would help end the country’s rampant inflation (it’s at around 16 percent). Raising interest rates, President Erdoğan has argued, only benefits the rich.

Some of Turkey’s blows have not been self inflicted. President Donald Trump doubled steel and aluminum tariffs on the country, punishing its ability to export and earn much needed foreign currency.

Those problems have set up a new, potentially bigger challenge.

By keeping interest rates artificially low, the Turkish government encouraged businesses to expand, and as a result borrow from abroad. “There has been a lot of hot money coming in on the construction sector in Turkey and a building boom,” said Harry Broadman, director of the Council on Global Enterprise and Emerging Markets and senior fellow at Johns Hopkins’ Foreign Policy Institute. “Ninety percent of external public and private sector debt is denominated in foreign currencies,” he said.

Here’s the problem. Because of the country’s falling currency, that debt just got a lot more expensive.

A Turkish business now effectively owes twice as much as it did at the beginning of the year. “You are indebted in the U.S. dollar or euro, but your revenue is in your local currency,” explained Lale Akoner, a market strategist with Bank of New York Mellon’s Asset Management business. She said Turkey’s private sector currently owes around $240 billion in foreign debt.

A Turkish cellphone company, for example, might now owe twice as much to a Spanish bank, but it can’t double what it charges its cellphone customers. This has some lenders worried about whether they will get paid back on time or at all.

“If they can’t get their money back, they will cut down on lending to other people,” said Fariborz Ghadar, director of Penn State’s Center for Global Business studies. Specifically, lenders may worry about loans to other countries that have troubled economies. He says Argentina, Brazil, Portugal, and Mexico are on that list. Other analysts suggest South Africa and Indonesia face similar economic pressures.

Lending to these countries may suffer, but most are unlikely to experience a full blown currency crisis like Turkey.

“The good news is we are not in panic mode,” said Win Thin, global head of emerging markets at Brown Brothers Harriman. He said many emerging market countries have improved their basic economic policies and regulations, and markets are differentiating between Turkey and these others. “Markets are punishing the countries that have weak fundamentals and political concerns, and the are limiting sales of countries that have better fundamentals.”