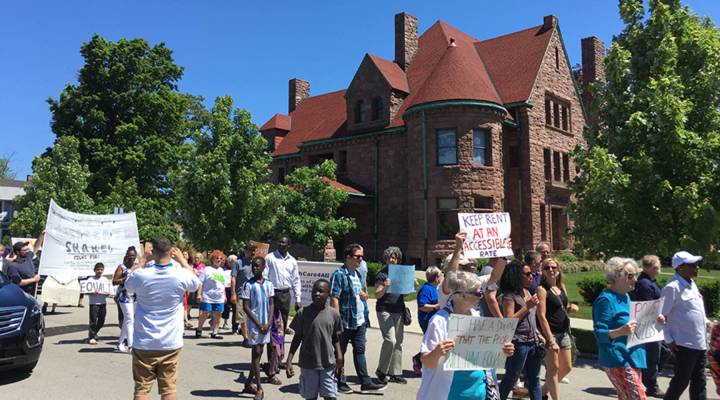 Clara Malave, 50, works in the hot and loud laundry room at one of the bayfront hotels in Erie, Pennsylvania, loading linens into massive industrial washers and dryers. At $8.80 an hour, it’s grueling work. But it is work, and she’s grateful for it. Like most of the other workers here, she’s a part-timer whose hours change constantly. She only knows a week out what her schedule will be. She keeps a carefully balanced checkbook and a list of her impending expenses.

“I always write everything I need to pay,” Malave said. “I say, I need this amount. And when I see my check — oh, what a mess. It’s not going to make it. I worry every day.”

Malave relies heavily on the social safety — she’s on Medicaid, gets nearly $200 a month in food stamps and lives in public housing, where she pays just under a third of her income in rent. Her home is a standalone townhouse, clustered among other similar homes in a quiet part of Erie.

And she just bought a used car, a 2012 Suzuki that she’ll be making payments on for the next five years. She hopes the car will open employment opportunities up to her and that that will eventually get her out of public housing. But she plans to sell her car if her government assistance is reduced. That choice may be coming.

Clara Malave, 50, makes $8.80 an hour at her job in the laundry room at one of Erie’s big bayfront hotels.

A plan that Housing and Urban Development Secretary Ben Carson proposed earlier this year would have Malave — and millions of other low-income households — paying roughly 5 percent more for her housing each month. Now, she pays $36 a month. Her car payment is a little more than four times that, a payment she anticipates will be a struggle each month. She’s worked in low-paid, no-benefits jobs since she was a teenager and moved to the mainland from Puerto Rico.

“Sooner or later anyway, I’m not going to be able to pay,” she said. “I’m going to be out on the street.”

Earlier this summer, President Donald Trump’s Council of Economic Advisers declared that America’s long-running war on poverty was “largely over and a success,” contending that millions of Americans are overly reliant on government help. That idea has become a key part of the Trump administration as it pushes for expanded work requirements and documentation for recipients of food, health care and housing benefits.

Malave has been in and out of subsidized public housing all her life. She regularly visits with her social worker, Patreece Johnson, 28, who grew up in public housing herself and now works for the housing authority.

Johnson has been busy. The list for Section 8, the housing voucher program, opened up for the first time in four years in Erie this summer. Johnson has been advising Malave on possible training programs she can attend now that she has a car — she tells her that since she’s worked in hotels for years, a hospitality certificate may get her a pay raise. Johnson sees lots of people like this, relying on many subsidized programs and still struggling.

And these proposed benefit changes may make it more difficult. Johnson compares it to keeping four burners going. And if anything happens to those benefits, they depend on, she said it would look like “an explosion. And I feel like people can only take so much.”

Erie is full of people like Malave. The national poverty rate is around 15 percent; in Erie, more than a quarter of residents live in poverty. And there are ZIP codes in the city where it’s even higher. That was obvious on a sunny summer day when hundreds of people showed up to march for better paying jobs, for fewer tax breaks for the corporations in town and for more affordable housing.

Johnson helped organize the march, part of the national revival of the Poor People’ Campaign from the 1960s. In Erie, it started at MLK Park, made its way through the old Millionaires’ Row and ended downtown. Among the marchers was Linda Pope, 61, who describes herself as “working poor.”

Pope has spent her life working in low-wage jobs at Walmart and at day care centers. And like Malave, Pope too spent years in subsidized housing. Then, with her husband, who worked at one of Erie’s once-prominent paper mills, saved and bought their own home. But hard times came. Now, even with her husband’s full-time job with the parking authority, she still qualifies for food stamps.

Linda Pope, 61, of Erie, just placed herself on the list for Section 8 housing. The list opened for the first time in four years this summer.

“You do what you are supposed to do, and it’s just like you just come out on the bottom most of the time,” she said.

When the list for Section 8 opened up, she put herself on the list. So did 1,400 other people. When Pope moved out of public housing years ago, she didn’t think she’d end up back there, but now she says she’ll feel lucky if she can get a place.