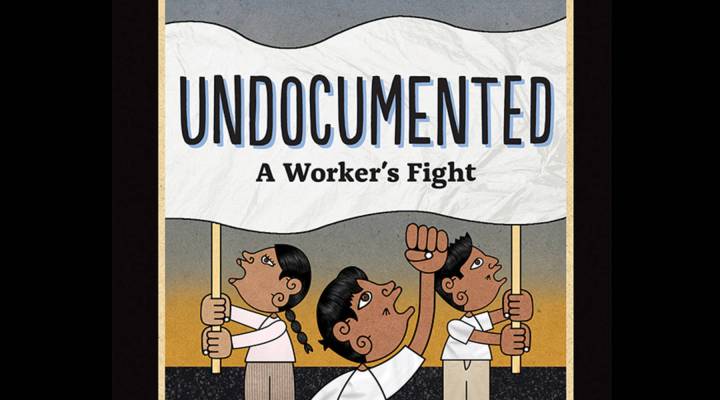 There are millions of undocumented workers in the United States. That part of the workforce is economically significant but not often heard from. Author and illustrator Duncan Tonatiuh, a dual Mexican and American citizen who grew up on both sides of the border, is trying to tell the story of some of those people in a picture book. Tonatiuh has nine previous books, all meant for children, but his latest, called “Undocumented: A Worker’s Fight,” is aimed at adults. The following is an edited transcript of his conversation with Marketplace host Kai Ryssdal.

Kai Ryssdal: Give me the, I guess if this was a conventional book I said give me the jacket blurb on this thing, but give me the very quick story on this then would you?

Duncan Tonatiuh: Well, it’s an illustrated book that tells the story of an indigenous man from his village in Mexico coming to the U.S. without documents and working as a busboy, but then realizing that he’s being exploited and taken advantage of and deciding to organize the people at his restaurant in his community to try and get better working conditions at his job.

Ryssdal: The art is super cool, and the format is really cool as well. It’s one of those with a hardcover on both ends and then you can unfold it almost like a giant map. But it tells the story in sequence on a series of panels.

A series of panels from Duncan Tonatiuh’s book “Undocumented: A Worker’s Fight.”

Tonatiuh: Well, it’s a project that began for me when I was in college. And at the time I volunteered at this worker center called NMASS, the National Mobilization Against Sweatshops. And there I met a person who inspired this story. This man is Mixtec — Mixtec is an indigenous community from the south of Mexico — and that’s why the book folds out like the artwork that the Mixteca used to make hundreds of years ago. Undocumented immigrants are often in the news, but we don’t hear so much about the exploitation and how poorly they are paid. And I thought it was important to talk about that aspect of it.

“The book folds out like the artwork that the Mixteca used to make hundreds of years ago,” Tonatiuh says.

Ryssdal: It’s the idea that what’s happening on the border now is getting all the press, but there is an undocumented workforce inside this country already that plays a role in this economy.

Tonatiuh: Yeah definitely. And I think sometimes people are quick to talk about the people breaking in and coming in without documents, but at the same time, I think people are happy to hire someone and pay them less than what they should because they don’t have the proper documents, whether that is in farming, construction, as nanny, as a landscaper. There’s millions of people working and being paid less than what they should or not having access to sick days or overtime or to all other sorts of things that we take for granted.

Ryssdal: I wonder if it’s easier to address some of these tough issues, right, on a lot of levels in the graphic format because you can make it more relatable?

Tonatiuh: I think so. I think sometimes when we talk about immigration and the undocumented, it’s in very abstract terms. It’s all about the economy. It’s all about numbers and statistics, and I think we don’t often hear the voices of people that are actually just trying to make a living. Me, being a dual citizen, it’s very easy for me to enter and exit the U.S. but I just thought it was important for someone to try and share some of those stories.