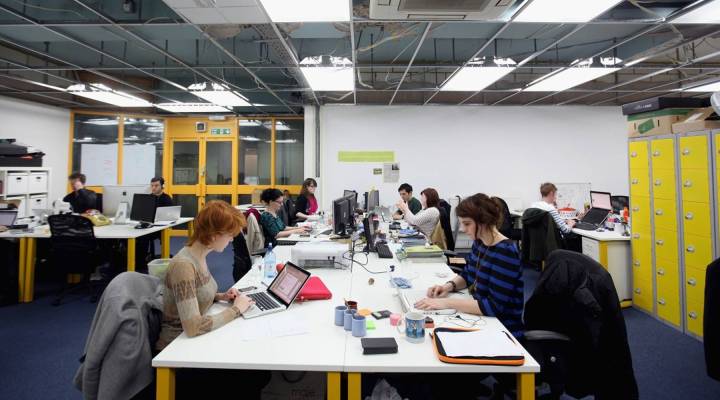 You, or someone you know, might work in one of those offices with an open floorplan — the big, fancy rooms with long rows of desks, people sitting next to each other without cubicles. Open offices like these have spread throughout the corporate world. They’re cheaper, but they’re also marketed around the idea that tearing down cubicles promotes collaboration.

Turns out, that might not be true. Ethan Bernstein, an associate professor of leadership and organization behavior at Harvard Business School, recently co-authored a study on two Fortune 500 companies as they moved into open offices and found that collaboration dropped as a result.

Known as the sociometric badge, researchers at the Harvard Business School used the device to measure employee interaction before and after the switch to an open floorplan.

While some workers might prefer electronic means of communicating, Bernstein said that’s not what the companies were going for. He said both companies hoped the offices would boost face-to-face collaboration and that teams working together would be able to get more complex work done.

“Open offices promise this vibrancy, openness, to have collisions with people we might not otherwise interact with,” Bernstein said. “Then, of course, there’s the reality: many people find them very difficult to work in.”

He said employees look for other methods to regain privacy, like sending an email to a nearby colleague sitting at a desk. Or working from home to avoid the open office.

Compare.com, an auto insurance startup in Richmond, Virginia, has an open floorplan. Marketing manager Tyler Brown sits on the main floor, and at 3 p.m. on a recent Thursday, can hear colleagues shouting out answers to a trivia game happening across the office.

Brown said he likes the hierarchy of an open floorplan — he finds approaching his boss easier than at previous offices he’s worked in. Still, he said it can get pretty loud with everyone sitting so close together. To cancel out the noise, he and his colleagues often put on headphones and use email or instant messaging.

“I see a lot of people finding dark corners of the office and trying to find a quiet corner to get some work done,” he said.

Still, some people like their open floorplans. Bond salesman Ryan Gallant sits at a long desk of traders and fellow salespeople at FTN Financial, an institutional bond firm.

“I think it makes it easier to kind of do business when you’re able to just stand up in, you know, maybe even verbally see each other and just kind of signal to each other with your hands if you’re on the phone,” Gallant said.

Sitting about 3 feet to his right, his boss Steve Walsh said working in a loud, open workplace can be motivating.

“There’s a strange phenomenon in that you tend to do more business with the people immediately around you by significant difference than you do with people that are even at the other end of the trading floor,” Walsh said.

Bernstein, the study co-author, said being motivated by your colleagues isn’t always the same as collaborating with them. Overall, he said he’s not saying open office designs are bad for companies, either.

“I wouldn’t suggest that an organization should choose one or the other, necessarily, but if you want more face-to-face interaction, more and more open office space is not necessarily going to get you there,” he said.

Bernstein said he hopes his research will help managers realize there might be a trade-off between the cost savings that come with an open office and increased collaboration among employees.