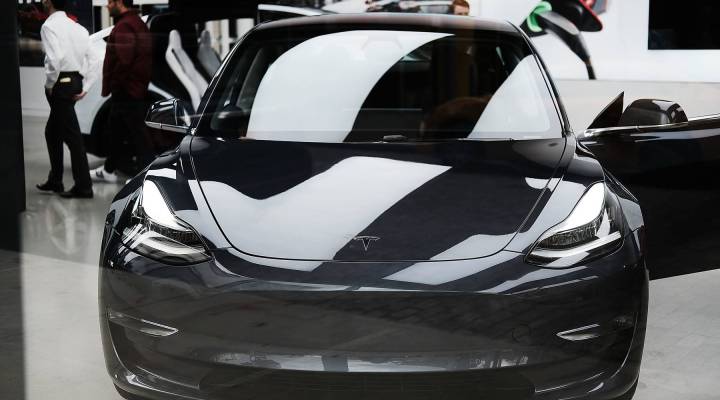 COPY
The day Tesla announced it was rolling out its new Model 3, Tesla stock had its best day since November 2015. Spencer Platt/Getty Images

The day Tesla announced it was rolling out its new Model 3, Tesla stock had its best day since November 2015. Spencer Platt/Getty Images
Listen Now

The car of the future was supposed to fly (à la “The Jetsons”) or at least hover. But if the car of the future is indeed the new Tesla Model 3, its special power is arguably its cellular, Wi-Fi and Bluetooth connections. And a 15-inch iPad-like screen that replaces the dashboard as we know it.

Geoffrey Fowler reviewed the Tesla Model 3 for the Washington Post and wrote that “even if you’re not interested in owning a Model 3, don’t believe in electric cars, don’t like CEO Elon Musk, or don’t believe Tesla will survive to produce them for $35,000, Tesla is setting the agenda for the auto industry.”

He spent three days with the car, made a video about the experience, which is embedded below, and discussed it with Marketplace host Kai Ryssdal. The following is an edited transcript of their conversation.

Kai Ryssdal: So first of all, you sit down in the Model 3 for the first time. What’s it like? Give us the vibe.

Geoffrey Fowler: You look around and all you really see is one giant iPad-looking thing right there in the middle. I mean, in fact, the first time I got into the Model 3, the radio was already on and it was blaring and my buddy and I … we wanted to talk, but we couldn’t hear each other, and so we were looking around trying to figure out: How do we turn off the radio? And believe it or not, and I am a professional gadget guy, I could not figure out how to turn down the radio. After about a minute of scrambling, I finally figured out if you repeatedly press in one corner, the volume would go down. But it was a sign of things to come.

Ryssdal: Well, so let’s go to that place where things are coming from. Part of the scrolling you did to find the volume knob — the virtual volume knob, I guess — was that you found this thing’s privacy settings. And that’s why I wanted to get you on the phone, because as you say in this piece, this is basically an iPhone in terms of its connectivity.

Fowler: Indeed. There’s a lot of really big questions, but of course the stakes are higher here because this is a moving vehicle. And you mentioned the privacy policy. That was one of the first signals to me as well. So you tap around on the screen for a while, and you eventually get to this screen, and it looks a little bit like the privacy settings on Facebook. And it says, “Oh, by the way, by default, Tesla is going to take video recordings of everywhere you drive and also information about where you go.” Now, you can turn that off — they give you the option, thankfully — but there’s also a microphone in the car, for example. That can be amazing. It can be used to talk with your car like you might do Siri or Alexa. It could even be used to diagnose problems in the car just by letting you know that Tesla folks remotely listen in to hear if there are problems there. But it can also be turned on, you know, to hear your private conversations.

Ryssdal: OK, but look, just to continue with the iPhone comparison here for a minute, when iPhones came out we were all, “Oh, man, this is whiz-bang and amazing, and look at all this stuff I can do, and of course there’s an app for that.” And now people are backing off a little bit, saying, “Wait, maybe it’s not so great that we’re staring at our screens all the time. Maybe it’s not so great that we’re connected all the time.” In 10 years, when the Model 3 is in theory everywhere — or whoever has ripped off its version of it — are we going to be doing the same thing?

Fowler: I think so. And that’s exactly the point of my piece. That maybe we need to start having that conversation now instead of waiting 10 years. And to me, the biggest challenge, the one that I think is most pressing that we really need to figure out now, is the distraction question. So now we’re having a lot of questions about, you know, is my iPhone making me lose sleep or is it turning my children into zombies? Well, the research that’s happened so far have shown that these touch screen interfaces in cars are very distracting and put a pretty high cognitive load on drivers. The problem is with Tesla, you have to interact with this thing while you’re on the road. It hides some pretty critical parts of the car, the function of the car. If you want to move the mirrors, you’ve got to click in there. If you want to change the air conditioning, you got that tap in there. If you even want to open the glove box, you’ve got a tap in there. There’s no handle for the glove box on its own.

Ryssdal: That’s nutty, man, that you have to do that. Because, I mean, right? Keep your eyes on the road.

Fowler: So, you know, I would think that Tesla really ought to be foregrounding how they’re designing this interface to be safer, but they’re not really. And in fact, last week, Elon Musk tweeted that he wanted to hire video game developers to develop games for that center panel.

And I was like, ah, this is not inspiring trust in this car and in the direction that this company is going to take us all.