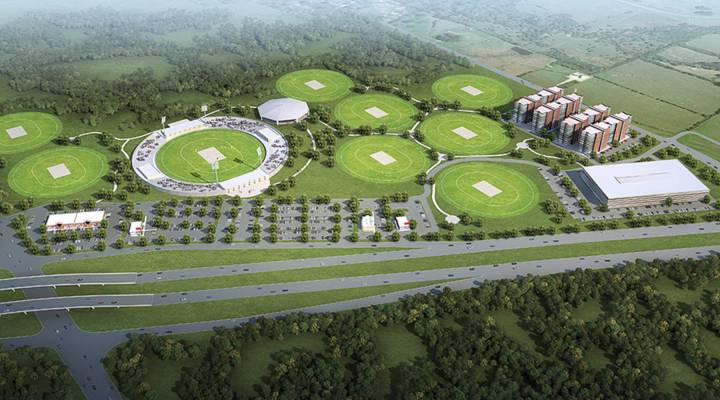 COPY
The developer's rendering of the new Kalsoom Prairie View Cricket Complex in Prairie View, Texas, population 6,000. The first four fields are set to be completed by September. Courtesy of Tanweer Ahmed

The developer's rendering of the new Kalsoom Prairie View Cricket Complex in Prairie View, Texas, population 6,000. The first four fields are set to be completed by September. Courtesy of Tanweer Ahmed
Listen Now

Cricket is the second-most popular sport in the world (soccer is first), but Americans don’t talk about it a lot. Most Texans talk about it even less. Kids here grow up watching football, baseball, basketball and (some) hockey. But a businessman in Texas hopes to change the way we think about cricket. The thinking is, if he builds it, people will come.

It’s probably the last place someone might expect to see a billboard hawking the largest cricket complex in the U.S.A. But in a town of 6,000 called Prairie View, nestled among undeveloped cornfields on either side of the highway, there’s a massive construction project underway, transforming about 86 acres of land.

Tanweer Ahmed spent millions of his own dollars to acquire the land. He grew up poor in Pakistan, saving pennies for cricket gear. He moved to the United States in the late 1980s and today, he owns more than 150 Taco Bell, Pizza Hut and KFC franchises. He also owns an energy firm, a medical research venture and the construction company that’s building this massive cricket complex.

“It was a dream project,” Ahmed said as he pointed to the construction crew flattening the landscape. “I’m just hoping and keeping my fingers crossed that I would be able to complete it.”

Ahmed said the first four fields are set to be finished by September. But why build a huge cricket complex, complete with a stadium, in Prairie View, a small college town in the middle of east Texas?

“This is right on the freeway,” Ahmed said. “People drive by. I think there are, like, 50,000 cars a day, and if you really want to introduce to the school level, people need to see us playing here.”

Ahmed said he wants to start a cricket academy on the property to attract kids and their parents in the area. He said he’ll start by promoting to the South Asian community he knows already enjoys the game. That population in the area is booming. Between 2000 to 2012, the Migration Policy Institute found the Pakistani immigrant population in Greater Houston grew by almost 75 percent and the Indian population grew by 87 percent. Many of those immigrants are already members of amateur cricket clubs.

“Every person that we’ve met here in Prairie View, they were very excited, they’re very friendly, very cooperative and they’re excited to have us here.”

Prairie View’s mayor, David Allen, is among those excited about the project. He’s agreed to help Ahmed with promotion and even money out of his city budget. He said he’s up for anything that widens the tax base in his town of mostly retirees and college students.

“That’s how I view it, as bringing individuals into our city and the need for additional development things like hotels, additional places to eat and all the things that go with those types of activities,” Allen said.

Allen said he’s into the project for other reasons, too.

Down the road at Las Fuentes Mexican restaurant, locals drink beers after work. Garrett Holloway, who works for a concrete company that services oil rigs, is skeptical.

“Why would they build the largest cricket platform here?” Holloway asked. “I don’t know. Because we’re in Texas, and especially around here, it’s football and baseball.”

But his buddy, Max McConnell, said Prairie View should be happy with any development it can get.

“I know the town well enough by living here to know that it’s not a very wealthy community,” McConnell said. “Anything that would bring people out here definitely couldn’t hurt the community.”

Whether residents here like it or not, Prairie View is quickly becoming part of the Houston metropolitan area.

A new turnpike and highway expansion means Houstonians can get here in 45 minutes. That could mean higher property values and more wealth in the community. It could also mean more international residents and visitors, people Tanweer Ahmed is hoping will turn his dream project into a global cricket destination.