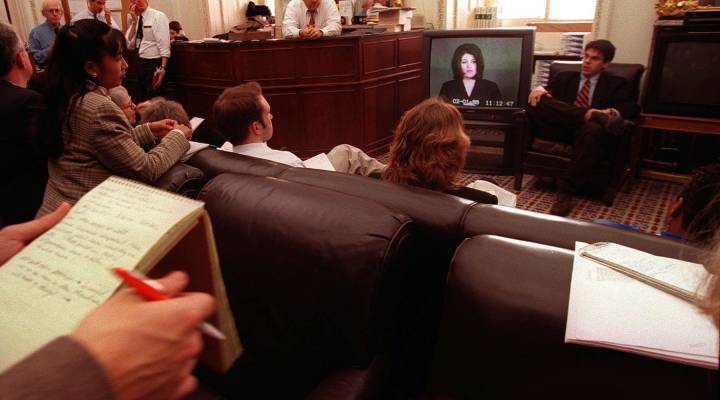 Reporters in a press room in the U.S. Capitol watch as the videotaped testimony of Monica Lewinsky is played in the Senate during the impeachment trial of President Bill Clinton on Feb. 6, 1999. MARIO TAMA/AFP/Getty Images
Make Me Smart With Kai and Molly

Reporters in a press room in the U.S. Capitol watch as the videotaped testimony of Monica Lewinsky is played in the Senate during the impeachment trial of President Bill Clinton on Feb. 6, 1999. MARIO TAMA/AFP/Getty Images

The ’90s are back. Everyone’s wearing tiny sunglasses, rap-rock is creeping its way back into the mainstream and “Slow Burn,” Slate’s hit podcast that examined the Watergate scandal, is back for a new season on the Clinton impeachment.

Host Leon Neyfakh told us he was initially resistant to covering the scandal because it almost felt too obvious. Ultimately though, some of the uncanny historical details they found were too interesting to ignore.

The new season of “Slow Burn” starts Wednesday, Aug. 8. Below, find a guide to the cast of characters. Some of them re-emerge from relative obscurity on the show — and some never really left.

Lewinsky arrived at the White House in 1995, one of several unpaid interns who picked up the slack for White House employees sent home during the government shutdown. Her affair with the president started on her first day at the White House and became public three years later. Her lawyers reached an immunity deal with independent counsel Ken Starr in the summer of 1998. As the Clinton administration came to a close, Lewinsky participated in a book called “Monica’s Story” and appeared on “Saturday Night Live.” She made TV appearances and business ventures until the mid-2000s, when she got her master’s degree at the London School of Economics and retreated from the public eye. Lewinsky emerged nearly a decade later with an essay in Vanity Fair describing the humiliation and notoriety that made having a normal life difficult. In recent years she’s become an advocate against cyberbullying, maintaining an active Twitter presence and writing in Vanity Fair about her experiences, online harassment and the #MeToo movement.

Tripp was working at the Pentagon in the late ’90s when she recorded conversations with Lewinsky, her co-worker, about an affair with Bill Clinton. Tripp brought the recordings to investigators, kickstarting the investigation into the president’s sexual conduct and ensuing cover-up. She was vilified throughout the Clinton impeachment, not least by Lewinsky herself, and retreated from the public eye not long after to open a year-round Christmas store in Virginia. After a stint writing for Breitbart, Tripp re-emerged in July 2018, giving her first public speech in nearly two decades on National Whistleblower Day. She’s seeking reappraisal in the #MeToo era, and she encouraged others to come forward if they see sexual misconduct.

Jones sued Clinton in 1994, saying he forced himself on her three years earlier, when she was working for the state of Arkansas and he was governor. Her lawsuit was dismissed, but it put events into motion that would eventually lead to Clinton’s impeachment. Jones later appealed the dismissal, and though he didn’t admit wrongdoing or apologize, Clinton later settled the suit for $850,000. After posing for Penthouse and participating in a celebrity boxing match with Tonya Harding, Jones went back to a quiet life in Little Rock, Arkansas. She returned to the public eye in 2016 to endorse Donald Trump’s presidential bid and appeared at a press conference convened by the Trump campaign before a presidential debate with Democratic candidate Hillary Clinton. Jones would later tell the author David Friend she felt “used” throughout the impeachment by advocates who wanted to bring Clinton down.

Originally assigned to look into the Clintons’ Whitewater land deal, Starr expanded his independent counsel investigation to include perjury and obstruction of justice in January 1998 after getting in contact with Tripp. His investigators intercepted Lewinsky on her way to a lunch she’d set up with Tripp and brought her to a hotel to convince her to testify. The investigation continued throughout the spring and summer, with Starr delivering a 445-page report to Congress in September 1998. Impeachment proceedings started shortly after. Starr went on to teach at several universities while practicing law and writing a book about the Supreme Court. He was named president of Baylor University in 2010 and later became chancellor, but left in 2016 following revelations the school had mishandled sexual assault allegations against football players during his tenure. Starr has made frequent media appearances this summer to weigh in on both the Mueller investigation and Trump’s Supreme Court nominee, Brett Kavanaugh, who worked on the investigation.

Kavanaugh worked for Starr at the office of the solicitor general, then on Whitewater. He departed for private practice, only to return in April 1998, when the inquiry expanded to include Lewinsky and obstruction of justice. Kavanaugh had previously said “it makes no sense” to investigate a president’s personal conduct, but former colleagues told The New York Times that he advocated an aggressive approach in going after Clinton and went on to write the section of the Starr report laying out his impeachable offenses. Kavanaugh has since expressed regret that he looked into the Lewinsky affair in the first place and skepticism that a president should be subject to criminal investigation at all. In July 2018, Trump nominated Kavanaugh for the seat on the Supreme Court being vacated by Justice Anthony Kennedy.

A former assistant U.S. attorney in Miami, Udolf was one of the prosecutors who first met with Lewinsky on Jan. 16, 1998, to negotiate an immunity deal in exchange for her testimony. Those negotiations dragged on for months and led to infighting among Starr’s team. Meanwhile, Udolf and the other investigators were at war with the White House and Clinton supporters, trading leaks and rumors throughout 1998. Eventually, Udolf returned to a private practice in Florida, where he still works as a white-collar defense attorney. He told “Slow Burn” he still feels uneasy about the way everything went down in 1998.