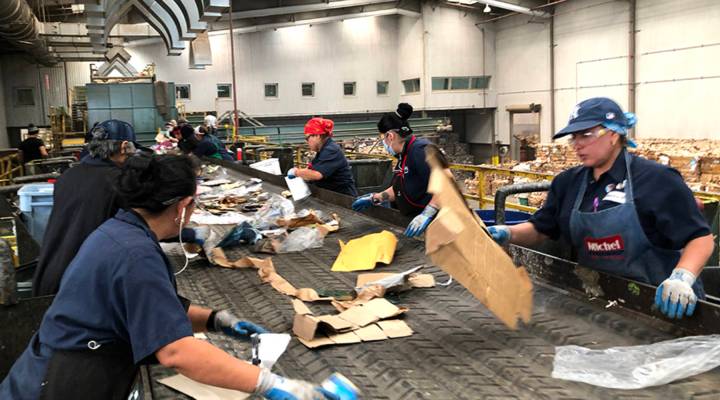 Heather Repennin, vice president of the Los Angeles Bureau of Public Works refers to herself as a “wastehead.”

“It’s someone who is completely immersed in discussions, operations and policy around the waste sector,” Repenning said. In her job, Repennin helps set waste and recycling policy for the city of Los Angeles. “Welcome to the world of being a wastehead,” she said.

One thing that keeps wasteheads up at night is the lousy job of recycling that non-wasteheads are doing.

“They’re hopeful that things will be recycled and so they put everything in there,” Repenning said. “That’s not what we want them to do. We want them to know what is actually recyclable.”

Recyclers along the West Coast are in crisis mode after China announced earlier this year that it will no longer buy a major amount of the recycled goods it once did. Municipalities and recycling companies are trying to figure out what to do with their growing piles of paper and plastic.

The official reason for China’s decision is that shipments are too contaminated with non-recyclable materials. Removing such contamination takes time and money and can make recycling uneconomical. Municipalities are stepping up their public education, undertaking more social media campaigns and inserting more informational brochures in water and power bills.

The uphill battle of ending contamination can be seen at the Puente Hills Materials Recovery Facility, a massive warehouse in Los Angeles County where bulldozers mound up mansion-sized piles of waste. Further down the sorting process, flattened cardboard boxes flop off conveyor belts. A lot of the material ends up in towered bales, ready to be sold, but a lot more of it is going to landfills after China’s decision.

The contamination problem is clearly seen on the high speed sorting lines, where dozens of workers separate out recyclable goods from waste.

Asgian pointed out obviously unrecyclable materials, such as soiled diapers. However, he also singled out contaminants many might not realize aren’t actually recyclable, including envelopes with plastic laminated on them, cling wrap and plastic fruit casing.

Some items, like cardboard beer boxes have recently become classified as contaminants.

“Next week who knows?” Asgian said. “But this week it is.”

That’s because recyclers can’t just pass chipboard beer boxes and other mixed paper along to China anymore. What was once in demand is now a glut. State officials said that’s posing big questions about materials that have the ability to be recycled but no real financial motivation.

“If there’s no viable market for it, is that something we want to continue to call recyclable?” said Mark Oldfield, a spokesman for the California Department of Resources Recycling and Recovery.