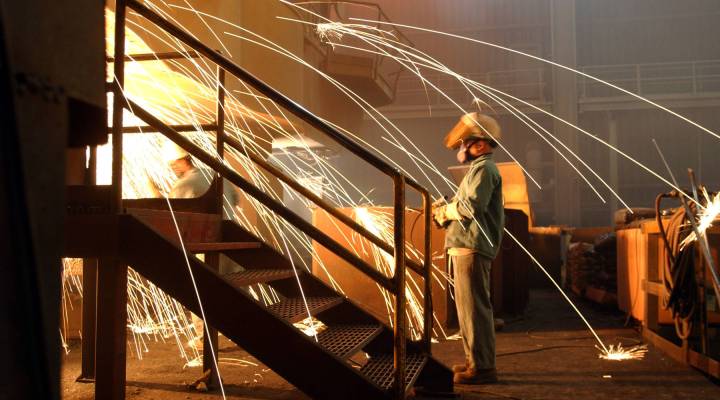 A worker is surrounded by sparks from molten steel flowing into casts at the TAMCO steel mini mill in Rancho Cucamonga, California, in 2002. David McNew/Getty Images
Trade showdown

A worker is surrounded by sparks from molten steel flowing into casts at the TAMCO steel mini mill in Rancho Cucamonga, California, in 2002. David McNew/Getty Images

In his interview with Marketplace host Kai Ryssdal today, National Economic Council Director Larry Kudlow said that President Donald Trump’s tariffs have left “very little impact, almost unmeasurable impact on real GDP. That’s a fact.” While gross domestic product may not have budged, we’ve talked to many manufacturers and farmers across America whose businesses have shifted to accommodate tariffs over the last several months. Again, in the words of Kudlow (and you can listen to that full interview here), “the pain has been de minimus, really very little.”

But for some of these people, the pain has been all-consuming. Let’s start with the Section 232 tariffs on imported steel and aluminum that Trump implemented back in March. Todd Adams runs a small family-owned stainless steel manufacturing business in Florida. When the tariffs hit, he already had shipments on the water from China that got slapped with several hundred thousand dollars in tariffs.

I never thought I would be involved in this and I didn’t ask to get involved in this. But I’ve been pulled into it, it’s very personal. You know, they they basically have robbed me of, you know, my life savings, and it’s just not fair. It amounts to theft, and the fact that they’re denying my application based on a technicality that they have invented … it really just adds insult to injury.

Adams submitted exemption applications for these shipments on the grounds that the product he ordered could only be made at one specific mill in China, but the applications were denied by the Department of Commerce. Another manufacturer we caught up with while slogging through the exemption process was Sam Desai, who runs a company that makes steel parts for appliances in New Jersey. His future orders have been stagnant since the tariffs were announced because of skyrocketing domestic steel prices and so much uncertainty around tariffs and potential exemptions.

Our customers have no option but to pay the extra fees with their duties. Because without that, there is no production here. So, end of the day, there are some items that are very specific, and now, as days go by, this is coming up more and more often: that the items that should not even have tariffs have tariffs, and now the consumer ends up paying more money for it.

While most people we’ve talked to that have worked on getting exemptions from the Department of Commerce agree that it’s been difficult, some of these manufacturers and farmers have received support from their representatives and senators. We talked to Mike Bergmeier, whose senator in Kansas scored him a call with Secretary of Commerce Wilbur Ross. We also talked to Rep. Jackie Walorski, a Republican from Indiana’s 2nd District. She said manufacturers in her district, which is the largest manufacturing district in the country, are trapped by tariffs.

[T]here’s a long row to hoe, here. A couple of weeks ago, Secretary Ross announced to several congressional members that the U.S. Treasury has a billion dollars more today than it did prior to these tariffs. And I objected and I said, “that’s American money! That’s American manufacturers’ billion dollars. This is not something to be excited about.” These folks are caught in a trap.