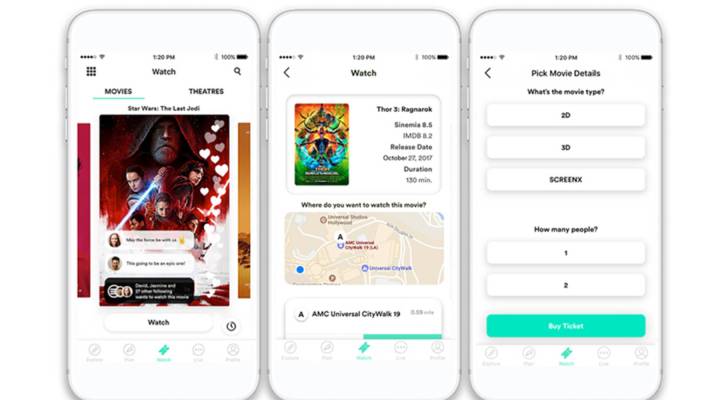 Screenshots from the Sinemia app. Courtesy of Sinemia
Listen Now

While MoviePass is in the headlines for its struggles with pricing and stockholders, a similar movie ticket subscription has been operating quietly around the globe. Sinemia is the MoviePass competitor founded in Turkey a few years ago. It isn’t quite a household name yet, but its expanded to Canada, Australia, the U.K. and now the U.S.

Last year Sinemia moved its offices to Los Angeles, California, ready to break into the Hollywood movie market. Marketplace host Kai Ryssdal talks with the company’s founder and CEO, Rifat Oguz about running the business and his ambitions for the company in the U.S.

Kai Ryssdal: So if I say movie ticket subscription service to people out there on Figueroa Street outside our studios, they’re going to say MoviePass. Does that make you crazy?

Rifat Oguz: Well, back then yes. Maybe like six months ago or a year ago. But almost one and a half years ago no one actually had the movie ticket subscription.

Oguz: And I was doing this business for like four years.

Ryssdal: Yeah so we should say you started it in Turkey right?

Ryssdal: And Europe, yeah. You brought it over here because you have to be in the American movie market, is that the deal?

Oguz: Well, I think this is the capital of movies. Hollywood drives the movie market and we knew we need to be in this market.

Ryssdal: So I want to get to the business side of this in a minute, but since you brought up Hollywood and the movie market — the movie business and the movie market is changing now right? We’re doing a lot of big tent pole movies, it’s all brands and franchises, and you get a couple of biggies a year. And maybe not so many sort of artsy or independent films that don’t always get all the buzz. What does that do to your business? How does that affect how you go selling these passes?

Oguz: Well it brings me back to why I actually founded Sinemia, because four years ago I was working for the corporate world. I was working for payment cards and the banks. And then the passion for movies, because I love movies, so why don’t we have a subscription so we don’t actually limit ourselves to go try the new movies at the movies? Because right now we just go to see this big franchise like “The Avengers.” But we don’t have a subscription.

Ryssdal: The deal with subscriptions though, is that it’s got to make it cheaper for me than — I think I paid $17 a ticket to go see whatever the last one I saw was, which is nuts. So make it worth my while. Right? Give me the pitch.

Oguz: So then you limit yourself because it’s expensive. So if it is subscription, we create a bigger economy and we actually can expect the demand. So I figured out, from my background, I was dealing with payment cards —

Ryssdal: Which is fundamentally kind of what this is right? It’s kind of a payment card?

Oguz: I always tell people like “we are not in the movie ticketing business. We are in the financial technology business.”

Ryssdal: Takes a little bit of the romance out of going to the movies though.

Ryssdal: But that’s OK because it’s actually a business.

Ryssdal: When you look at MoviePass, which is for now the industry leader, right? And the trouble it’s having right, its having some really serious issues. Do you get worried or do you think that’s an opportunity for you?

Oguz: Well I always see this like everything is an opportunity. So about a year ago, after I moved to LA, they dropped their price to $9.99. And all the investors asked me am I going to do the same?

Ryssdal: Your investors said are you going to drop your prices as well? Because that’s money out of their pocket right. Right?

Oguz: Yeah, sure. So everybody asked me and I was like “we will keep what we are doing because this is how we succeed,” right? So we keep $9.99 for two movie tickets, but give more flexible options. So the casual moviegoers, like the competitors are saying that later they will go less than a month right?

Ryssdal: Less than once a month.

Oguz: So if you’re really going less than [once] a month, we thought that you don’t need an unlimited option.

Ryssdal: One of the critiques of this company has been that it’s user experience is not necessarily great, some issues with the apps. Now that you’ve got it up and running, how much time do you spend troubleshooting? And how do you fix that? Because once a consumer gets turned off it’s kind of tricky to get them back.

Oguz: Well that’s true. And we know that we’re improving our apps every day, right. But one thing that we do in the Sinemia — we have 60 people in our team. And from the IT, the marketing, and the customer experience to finance — they all see the negative social media reports, every day when it happens from their phone. So then everybody knows what the issue is and they are working to improve that. So that’s one thing that we do every day.

Ryssdal: How often do you go to the movies?

Oguz: Right now I go once a week.

Oguz: Yeah. We need to be in the movie theater, we need to feel the audience.