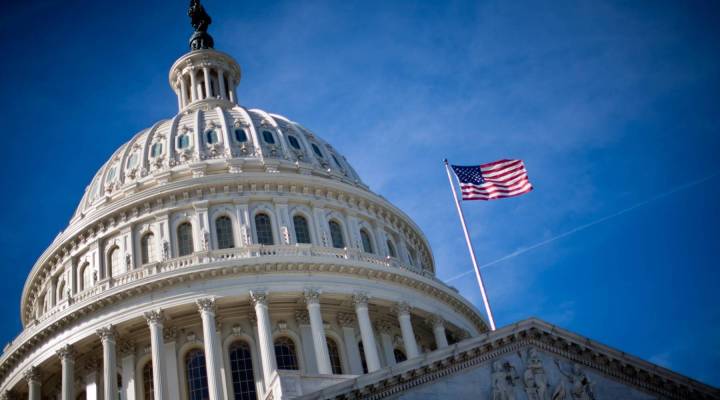 COPY
A view of the U.S. Capitol. Brendan Hoffman/Getty Images

Escalating trade tensions between the White House and its allies have raised questions about whether the president has too much power when it comes to tariffs, with some criticism even coming from Trump’s own party.

Initially, the Constitution gave Congress the right to regulate trade between the U.S. and other nations, but over the past century, Congress has passed laws that gradually transferred trade powers to the president. Could we see another reversal in the future?

Sen. Pat Toomey, a Republican from Pennsylvania, joined us to discuss his thoughts about yesterday’s talks and what Congress is doing about its ability to control tariffs.

Tracey Samuelson: Senator, you’ve been critical of President Trump’s trade policy. Are you feeling any better after yesterday’s talks?

Pat Toomey: Well it’d be hard to feel worse after yesterday’s talks. One of my several concerns about the administration’s trade policy has been a lack of clarity about the goal. What are we actually trying to accomplish with Canada and Mexico? Here, we had yesterday a very clear discussion about a goal: zero tariffs and an end to non-tariff barriers — at least with respect to non-automobile manufactured goods. That’s a very big category; it’s a very big ambition. There is a mutual agreement that no additional tariffs will be imposed as long as these negotiations proceed. It’s only less than 24 hours ago and it’s quite new and it’s going to be difficult to achieve this, but it certainly strikes me as a movement in the right direction.

Samuelson: There have been some efforts by Republicans in Congress, you included, to put the power to levy tariffs back with Congress and to limit the president’s ability in that area. Are you going to continue down that path?

Toomey: I am. As a general matter, Congress has ceded way too much constitutional authority to the executive branch — really across the board. But probably nowhere more so than in the trade space. And this goes back decades. It’s not a recent phenomenon, but it’s gotten to the point where a president can, in complete compliance with the law, invoke national security and slap tariffs on our closest allies and friends. And Congress is a helpless bystander. That’s ridiculous and it’s inconsistent with our constitutional responsibilities to set tariffs and to manage commercial relations with foreign nations. So yes, it’s my intention. I can’t promise exactly when or on what legislative vehicle, but this really should be a congressional responsibility, and I want to work to restore that.

Samuelson: The president said all along that these tariffs are a tool to help rebalance trade in the U.S.’s favor. Is that working? Does that make sense?

Toomey: Well, if we end up with a trade agreement where we have zero tariffs and zero non-tariff barriers between ourselves and a large trading partner where there are significant tariffs today, then I’m going to have to take my hat off and say that’s a great outcome. So with the announcement from the European Union yesterday, that’s what’s encouraging about it, right? It’s the right goal. But with the case of NAFTA, for instance, that’s not the goal. And the specific policy changes that the administration is seeking would make the deal a worse deal, not a better deal. So I understand the idea of using leverage to enhance a negotiating position, but I can’t support it if it’s working towards the wrong goal.