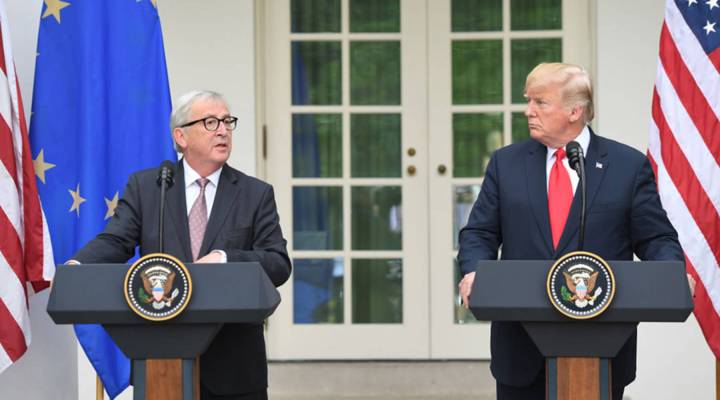 WASHINGTON — President Donald Trump met today with top European Union officials amid concerns of a growing trade dispute between the two economies over automobiles. During the meeting, European Union Commission President Jean-Claude Juncker told President Donald Trump that the EU and U.S. are partners and allies, “not enemies,” and must work together at the start of trade negotiations between the two major economies. Juncker said he has made a deal with Trump to try to ease trade tensions.

Juncker said during a joint Rose Garden appearance with Trump that he “had the intention to make a deal today and we made a deal today.”

Juncker said after a lengthy meeting with Trump that the EU has decided to increase imports of American soybeans and liquefied natural gas.

He also said as long as negotiations are ongoing, “We will hold off further tariffs” and reassess existing tariffs on steel and aluminum.

Trump said they agreed to work toward “zero tariffs” and “zero subsidies” on non-automobile goods.