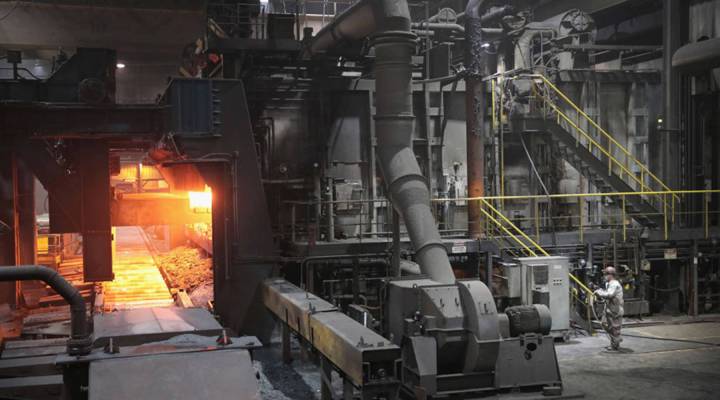 COPY
A slab of steel, 8 inches thick, is heated before being rolled into a coil of steel at the NLMK Indiana mill in Portage, Indiana, in March. Scott Olson/Getty Images

A slab of steel, 8 inches thick, is heated before being rolled into a coil of steel at the NLMK Indiana mill in Portage, Indiana, in March. Scott Olson/Getty Images
Listen Now

We’ve been talking to businesses all over the country who are starting to see real effects from President Donald Trump’s tariffs in their bottom lines. One of them is Ronnie Smith. He’s the vice president of operations at family-owned company down in Houston called McMahon Steel Supply. McMahon distributes steel tubes and other products to the oil and gas industry. We first talked to Smith about why he applied for exclusions from the steel and aluminum tariffs. Now that the Commerce Department has denied McMahon’s exclusion requests, Marketplace host Kai Ryssdal called him up to check in. The following is an edited transcript of their conversation:

Kai Ryssdal: Just as a way to get going here, help me understand why these tariffs matter to you so much.

Ronnie Smith: Well, the majority of the products that we speculate on and put in inventory are all bought overseas, mostly from Japan, Germany, France and other countries, primarily because most of those products are not produced in the United States.

Ryssdal: OK. So to get to your exclusion or exemption saga, you filed back in April with the Commerce Department a request for a certain number of exclusions, asking that those imported products not be subject to tariffs. What happened?

Ryssdal: So I’ll tell you what, we’ve actually followed up with some of those steel companies, one of them in particular, and they said in essence, “We made a mistake, and are trying to fix it with the Department of Commerce.” But you are now stuck in a, this is a trite phrase, but a maze of red tape that is affecting your bottom line.

Smith: Oh, it’s amazing, because, you know, any steel that comes into the country or, you know, goes through customs inspections as of June 1 is subject to a 25 percent price increase for us. This is steel that we ordered six, seven, eight months prior to any of this happening. We’re forced to pay that, bring the inventory in. We filed for exclusions and we’re finding out that those exclusions were denied based on technicalities that the government has yet to explain to us.

Ryssdal: All right sir, so look, this shows no signs of slowing down, right? The president’s talking about more tariffs, not less. The Chinese are doing the same thing. What are you going to do?

Smith: Well, all we can do is try to increase our prices and hope that the customer base here, which are guys like Halliburton and Weatherford, Schlumberger and big oil field part manufacturing companies, will continue to absorb the price increases, which basically they say they can buy the steel probably 30 to 35 percent cheaper in almost any other country in the world. They have manufacturing facilities in Romania, Malaysia, China. We were just told by a customer yesterday that they’ve moved a large part of their commodity product line out of Texas and they’re moving it to their manufacturing facility in China.

Ryssdal: All right, so listen, the Trump administration says they’re going to give $12 billion to farmers that have been hurt by the tariffs. Commerce Secretary Wilbur Ross comes to you and says, “Hey, here’s a chunk of $12 billion to make you feel better.” What do you say to that?

Smith: I would say, “Let’s just let free markets take care of themselves.” We don’t want subsidies, we don’t want terrorists disguised as national security initiatives. It’s the United States steel industry’s fault that they didn’t reinvest in their business since World War II to begin with. Now more than 80 percent of the steel in the world is produced outside of the United States. That’s just an economic fact of life.