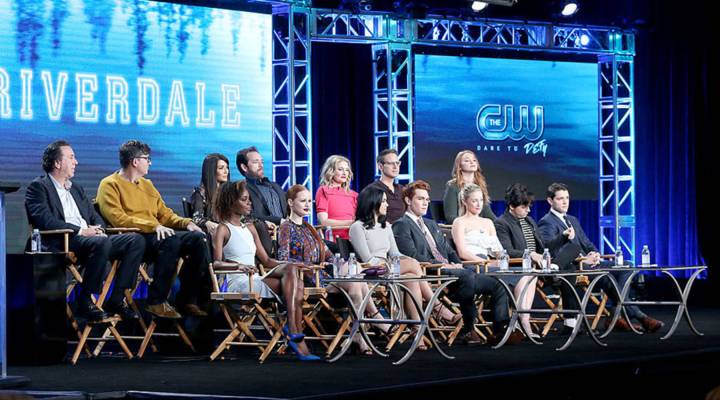 When Jon Goldwater took over the family business in 2009, the company’s namesake comic character had barely changed in decades. Now, as co-CEO of Archie Comics, Goldwater has shepherded a new era for “Archie,” bringing on new comic creators and helping produce the hit CW show, “Riverdale,” a noir version of “Archie” that’s pretty different from the one that debuted more than 70 years ago.

Marketplace host Kai Ryssdal spoke to Goldwater about taking charge of the family business and the direction that the Archie brand is headed. The following is an edited transcript of their conversation.

Kai Ryssdal: You basically grew up with this company.

Jon Goldwater: Yeah. I mean, it’s been in my blood and I don’t know this for 100 percent fact, but I’m sure I learned to read by reading an “Archie” comic. So I can’t tell you that 100 percent, but they were just there, you know?

Ryssdal: You’re probably not the only person who learned to read reading “Archie” comics, you know?

Goldwater: You know, it’s funny, like when I go to like Comic-Cons or I meet people, whoever they may be, so many people tell me they learned to read through “Archie” comics.

Ryssdal: This is not, however, your father’s Archie Comics, I think is a kind way to say it. When you took over this company 10-ish years ago, plus or minus —

Ryssdal: — what did you feel your mandate was? Because, to be honest, “Archie” had languished.

Goldwater: Yeah, I mean candidly, I was not really certain where “Archie” sat in sort of like the zeitgeist of comic book people, or just, in general, in pop culture. And it took me quite a while to really get a handle, candidly, of just how irrelevant “Archie” was.

Goldwater:  I’ll tell you a very quick story. I’m on the train heading into Manhattan and I’ve taken a couple of my “Archie” comics with me and they’re on the seat next to me, and a young lady, you know, [sits] down next to me and she noticed the “Archie” comics and she said, “Oh, my god, they still make those?” And I was like, wow, that hit me right between the eyes, and that was my, really, moment where I said, “OK, we have to figure out how to change things, because otherwise we’re going to fade into obscurity like many of these older comic book characters have done.”

Ryssdal: What was it then that, in your mind, turned things around for you? What was the decision you made?

Goldwater: Well, I mean, the first thing I did was I called a meeting of all our writers and our artists into the office, and I said, “Everything is on the table. No idea is a bad idea. Just tell me what you want to do. I promise you, I’m not going to fire you. I want any and all ideas from you guys because you guys are the lifeblood of ‘Archie.'” The writers, the artists, they’re our lifeblood.

Ryssdal: You said in an interview not too terribly long ago, you said, “As long as the story feels true to the spirit of the characters, it can be anything. Archie fights zombies, has powers towards the world, there is no limit to what you can do with these amazing characters.” Which is amazing in itself because they’re 75 years old.

Goldwater: Yeah, it’s all about DNA, right? So if the DNA and the integrity of the personalities of the characters are true to who they were 75 years ago — I mean, Archie is still a good guy, and, you know, he’s still best friends with Jughead. As long as they’re true to themselves, it works. And we’ve proven that. It’s actually amazing, to be honest with you.

Ryssdal: Why did you decide television and “Riverdale?” It’s a little dark, right?

Goldwater: Yeah, look, again it goes back to the DNA sort of conversation. If they’re going to be in Riverdale, and it’s just going to be high school hijinks, you know, candidly, that’s kind of boring, you know? And, you know, we want to tell compelling stories, you know, we want all the young people that watch the show to be able to relate to the characters, and the world is not rainbows and unicorns all the time, let’s face it. Right? I mean, there’s a lot of stuff that goes on in the world. You know, we wanted to tell a story that was today and that was relevant.

Ryssdal: Do you look at DC and Marvel and the Wonder Womans and the Avengers and the Thors, and say, that’s where I want to go?

Goldwater: Well I look at Archie as being in the same sandbox as them, for sure. I mean, you know, our IP is as famous as theirs, except, you know, in a different way.

Ryssdal: Well, so, are you underperforming?

Goldwater: No. No, not at all. I mean, look, we’re catching up. I wouldn’t say underperforming. Actually, I think we’re overperforming because I think people sort of left us for dead. And now people are like, “Oh, wow, I’m so happy you’re doing this, it’s like, I always loved these characters. Thank you for putting some life back into them.”

Ryssdal: What do you suppose your dad would make of what you’re doing with this character and these people?

Goldwater: I don’t think he would ever have believed that this were possible. I mean, he passed away in 1999, and I’ve got to tell you, candidly, he never thought “Archie” was going to endure. And if he saw what’s happening with “Riverdale,” and how people are just in love with the characters, in love with Betty and Veronica, I have to tell you, I think he would be completely flabbergasted. In a great way, in an absolutely great way.