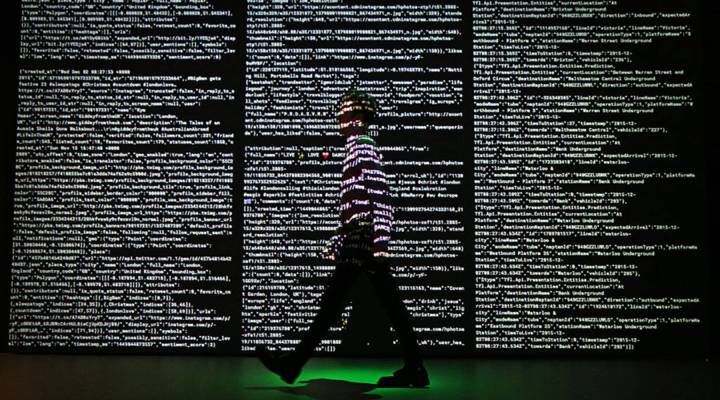 Between social media, election meddling, privacy concerns and fears of internet addiction, we are at a time when we are re-evaluating the grand bargain that we have made with technology. We’ve gotten used to trading personal information for tailored ads and letting devices into every part of our lives for convenience. But, as we develop these habits and make these trade-offs, what does it mean for our kids?

For the next week, we’re going to look at this tech bargain and its impact on the next generation. We’re starting with a conversation about marketing. Marketplace Tech host Molly Wood talked to Marcus Collins, chief consumer connections officer at the Doner creative agency, about how advertisers think about reaching kids. The following is an edited transcript of their conversation.

Marcus Collins: We’re constantly driving to the next future consumer. Three years ago, it was all about millennials. Millennials, millennials, millennials, and now we’re thinking about Gen Z, and the notion is how do we prime the pipeline on behalf of our business? Because we can’t message 13-year-olds or young kids on Facebook or other mediums, we had to find other ways to introduce our messages to them. While that at surface sounds a bit sinister, it’s far less malicious than that, I believe.

Collins: I can speak for myself. The idea is if the brand has a cultural belief that drives what it does, then we want to activate the people who subscribe to that culture as well. Right? So Beats by Dre, they weren’t targeting 13-year-olds; they were targeting a particular culture, and the product became the visual silhouette of a young America, of what was contemporarily accepted or expected of a particular group of people and their culture. And because young people ascribe to that, you end up targeting or reaching young people that way.

Wood: So there’s the kind of if you create something that’s cool enough, it will have a big enough halo that, tor example, my 10-year-old asked for Beats by Dre for Christmas. That happened. Good job, Grandpa. But then, as you try to create a brand with that kind of a halo, what kind of data about kids can be collected or is collected, and how can they be targeted?

Collins: A lot of the data actually comes from secondary data. So it’s not a lot of first-party data that we’re getting. For instance, like, the technology of the data, the Facebooks, the Twitters of the world, they have caps on the people who can use it, right? Like, you have to be a certain age to use Facebook, so we’re never getting data from people below a certain age. Even marketers can’t get access to data, people 18 and under or under the age of 18 on Facebook, though young people are getting access to the messages, they’re not being directly targeted from, at least the ads aren’t necessarily being targeted directly to those people. And the interesting part is I think that there’s a lot of fixation on the mediums that we use as opposed to the content that populates the media. You know what I mean? I think about it this way: When I was younger, there was a lot of talk of, like, violence in movies is causing violence, or Marilyn Manson is causing kids to do horrible things, and Eminem was an awful person. And today, we speak less about the content that’s being consumed, but rather about the media, the medium by which we’re consuming the content. Right? Which says a lot, because the medium that we’re using sheds data that informs what kind of stuff they get. Is it perhaps a misdirect and we’re not paying attention to the content as much as we are the technology?

Wood: So if you don’t want them to have this message, we should keep them on Facebook?

Collins: I think the question becomes, what is the trade-off? In everything, there’s a trade-off. What’s the Obi-Wan Kenobi quote? “Only the Siths deal in absolutes.” There’s always a trade-off to everything. We can say we’re going to live a closed off life where there are no cookies; we’re not providing any data at all. Well, then, therefore, you as a result, you can’t participate in or benefit from the network that a Facebook helps facilitate. Or you can say, “Well, I’m going to be online, but I’m not going to open up any of my privacy,” which means that the ads you now get have nothing to do with you. So that you deal with the annoyance of getting ads about dog food when you don’t have a dog, which is essentially what television has been. I kind of speak in broad strokes. And as a result, over the decades, advertisement has basically meant time out for you to go do other things until your programming comes back on. The notion of using data to serve up more contextualized messages and experiences has meant that the content that you receive is more aligned to you and hopefully should be more helpful. Which is why Amazon is as powerful as it is, that the recommendations are based off of your behavior and people like you so you get better recommendations. Netflix is the exact same way; the algorithm is meant to optimize the recommendations that you get. But it’s the trade-off that we have to decide, which trade-off we want to take on.

Wood: My question is: What is the awareness of the trade-off? Right? Like, we seem to be in a time when a lot of Americans are just waking up to the degree of the trade-off that they have made. If most adults don’t even know what they’re trading or don’t know where all the information is going after at least the one platform they thought they were sharing with, is it fair to assume that they also are making informed decisions about their kids data, too?

Collins: Amen. I couldn’t agree with you more. If I don’t understand the trade-off that I’m making, how can I help make decisions for my child?

Wood: Is it bad for your industry? I mean if everybody gets angry about the amount of data that we’re trading or about the practices or the way that companies, you know, if they’re too cavalier, is it ultimately bad for brands?

Collins: I don’t think it’s bad. I think it creates an inconvenience. When we consider that being bad — look, the data provided to us as marketers allow us to create more customized experiences that are either through messages or through high-touch interactions. And the idea is that is the only good because it helps us serve up better messages, but the hope is that it provides some value to the consumer and to the person that help their lives just a little bit more. Look, yes, we’re selling things. Marketers are selling things. We’re not a philanthropy in most cases, but I would argue that the data only provides information. It doesn’t provide intimacy, and intimacy comes from radical empathy and great curiosity. And the marketers who are really, really good have been good at that before we had the zeros and ones. The Facebooks of the world provide data that allow us to do this more efficiently, but at the core, we’re just trying to better understand people, and mitigating the access to data that we have forces us to get better at being curious and empathetic.

Wood: OK, so then let me put this to you. Facebook CEO Mark Zuckerberg repeatedly refused to tell Congress that Facebook wouldn’t collect data on kids under 18. I feel like I hear you saying maybe your industry could be fine without it. Couldn’t there be rules like that for kids and data?

Collins: I think so. I think that there is a level of agency that kids should be able to say, “I’m really giving my info now because if I can vote, if I can cast a vote, then I can vote whether or not I want to give up more information about me or not.” I think that’s completely legit. As a father, I think about these things, and my wife and I police what my daughter interacts with. But it’ll be good to know that there are regulations in place that are keeping her safe, that, you know, as close as I am to the industry, I live in this industry and I’m thinking about these things every day, there are some things that get by me, and if my level of understanding is as high as it is, imagine for those who are completely nascent. So I think it is the responsibility of public policy to make it such that we’re putting in systems and checks and balances that require people to give consent willingly and well-informed.