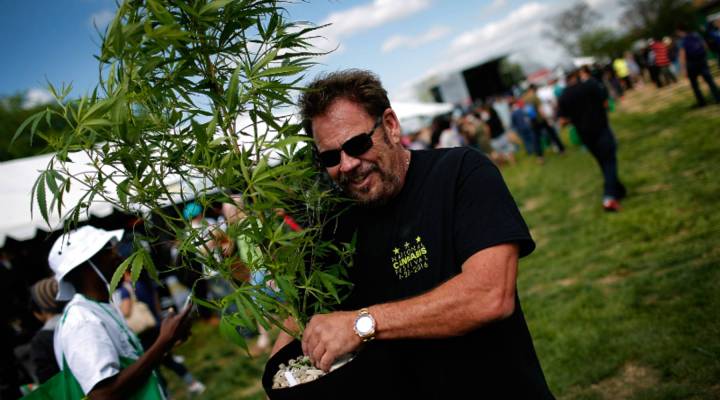 COPY
A vendor of hydroponic growing equipment carries a marijuana plant to his vending stall during the first annual National Cannabis Festival on April 23, 2016 in Washington, D.C. Win McNamee/Getty Images

Stock in a cannabis company called Tilray is up 46 percent since launching on the NASDAQ market on Thursday, and it’s a multi-billion dollar bet that the legal marijuana business is here to stay.

You can trade stocks in marijuana companies informally over-the-counter (OTC is the term) but trading on a regulated big time U.S. stock exchange is the next big step for cannabis companies.

Alan Brochstein — the founder of 420investor.com, which tracks stocks from the weed world — joined us to discuss what the state of trading looks like right now. Below is an edited transcript of the interview.

So when it comes to cannabis companies on the U.S. exchanges, there are a few right? But they’re over-the-counter stocks.

That is correct. And the OTC has several different types of companies on it and many of the publicly traded companies on the OTC don’t even file with the Securities and Exchange Commission or the SEC. Part of that is obviously because of the federal illegality, but I think another part is most of the real companies have been kind of cautious. Because in early 2014 when Colorado legalized the whole sector of publicly traded stocks, it just exploded. They were up like 10 times, 20 times, 30 times. In the ensuing sell off, the stocks lost up to 100 percent of their value. Some of them are gone actually, so I think we’ve changed. And now we’re starting to see the real U.S. cannabis industry access the publicly traded markets. Sometimes on the OTC — more often than not, though, it’s been through Canada, actually.

So they’re not exclusively over-the-counter stocks?

There have been some interesting developments over the years. The first of which was a company called GW Pharmaceuticals — a U.K. based company. They listed in May of 2013. The stock was in the $8 range, it’s trading now in the $140 range. This is a biotech company, but they are actually using plant-derived cannabis. That’s been just a very successful story, but you know it’s a little bit different. They’re not selling in dispensaries in the United States.

Are we not quite ready for just an index that would be linked to a basket of of cannabis stocks?

So there are indexes. I actually run five of them — at new cannabis ventures dot com we list them all. The problem right now is the federal illegality being part of it , but also just the rules of creating funds the liquidity isn’t quite there yet for the sector to have U.S. stocks. But the indices are out there so people can track the market for sure.