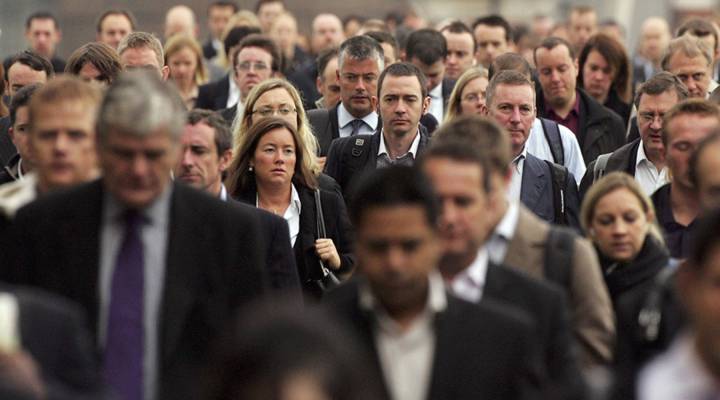 The U.S. economy is going strong nearly a decade after the Great Recession. The unemployment rate was 4.0 percent in June 2018, and fell even lower earlier in the year (3.8 percent in May 2018) before ticking up as new job seekers entered the labor force.

In fact, the job market is now better by numerous measures than it was before the Great Recession. Unemployment has only been at or below 4.0 percent twice since 1960: from 1966 to 1969, and during the economic boom at the end of the Clinton administration in 1999-2000.

Back then, on Jan. 7, 2000, Marketplace host David Brancaccio described the Labor Department’s employment report for the previous month: “The jobs market at the end of 1999 was as bright as it’s been for about three decades.” That month, 315,000 jobs were added, unemployment fell to 4.0 percent, and the Dow hit a new record high.

Unemployment has again fallen to the same low levels, and job openings are at near-record highs. But today, “things might not be quite as great,” said management professor Peter Cappelli at the Wharton School.

About 23 percent of the unemployed today are long-term unemployed — they’ve been looking for six months or longer. That’s nearly double the rate in 2000. And a larger percentage of people are working part time because they say they can’t find full-time work; the rate was 2.4 percent at the end of 1999, compared to 3.0 percent in June 2018.

Labor economist Michael Strain at the American Enterprise Institute said this measure might be elevated because of technological changes in sectors like retail, hospitality, and logistics. “As scheduling software has gotten more advanced, as the low-wage labor market has become more threatened by automation, it’s harder for workers to get the kind of hours they want,” he said.

Cappelli said it has become harder for those with less education and skills to find good jobs, because employers have boosted job requirements. “Following the Great Recession, employers could raise job requirements — what they were looking for in candidates,” he said. “So for example, legal secretaries — that was a job filled by high school graduates, and now it requires a college degree. It’s not because the work changed.”

Another difference from the Clinton era boom: A larger percentage of the population back then was participating in the labor market — working or actively looking for work. The labor force participation rate has fallen from around 67 percent in 2000, to just below 63 percent now.

Some of that results from long-term demographic changes based on age and gender, said Linda Barrington, executive director of Cornell University’s Institute for Compensation Studies. A wave of baby boomers is now retiring, and fewer young people are going to work right after high school, as they seek more job qualifications.

“The labor force participation rate of 16-to-19-year-olds has been on a downward trend because that population has stayed in education longer,” she said.

She also pointed out that for the past several decades, men have fared worse than women during and after recessions — possibly because they’re concentrated in occupations like manufacturing that have downsized. “Since the Great Recession ended and we now have these very low unemployment rates, unemployment has still remained generally a little higher for men than for women,” she said.

Wages grew faster in the late 1990s economic boom than they are growing now. The annual increase in average hourly wages was 3.7 percent in December 1999; it was 2.7 percent in June 2018, an increase over previous months.

Economist Gary Hoover at the University of Oklahoma said that wage gains have been unevenly distributed in the recent economic recovery: “Skilled workers and people with advanced degrees are finding this to be a relatively fantastic labor market,” Hoover said. “However, for those sitting on the sidelines waiting to jump back into the labor market, the prospects of finding employment with higher wages remain limited.”

Dean Baker at the Center for Economic and Policy Research believes there are still a lot of potential workers not actively looking for jobs, so employers don’t feel compelled to ratchet up wages to get the talent they need.

And he says there’s another reason for anemic wage growth: labor is earning a smaller share of the profits of work than decades ago. “We had a notable shift to profits around the Great Recession,” Baker said. “As the unemployment rate was shooting up, we had a very weak labor market, and workers had very little bargaining power. Companies were able to increase the portion of output that they could pocket as profits. So they’ve done very well.”