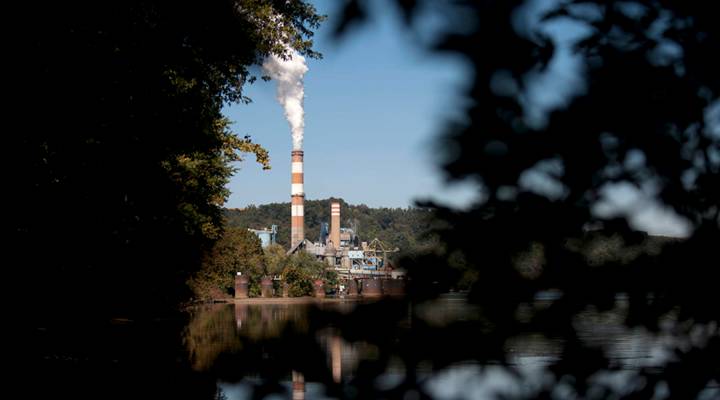 COPY
A plume of exhaust extends from the Mitchell Power Station, a coal-fired power plant built along the Monongahela River, in New Eagle, Pennsylvania in 2013. Jeff Swensen/Getty Images

A plume of exhaust extends from the Mitchell Power Station, a coal-fired power plant built along the Monongahela River, in New Eagle, Pennsylvania in 2013. Jeff Swensen/Getty Images
Listen Now

You know the old saying “an ounce of prevention is worth a pound of cure”? About a decade ago, the Obama administration tried applying that to the fight against climate change. Federal agencies were required to assess the future damages of carbon emissions as part of cost-benefit calculations — the kind they need to do before passing new regulations.

President Donald Trump has mostly rolled back the requirement, but researchers are even now working on a better way to calculate what’s known as the social cost of carbon.

At the Climate Impact Lab at the University of Chicago, researchers sit hunched around a long table in a narrow, windowless room. They’re busily scraping data to be crunched by their lab’s supercomputing cluster — a task workers have been doing for years.

Michael Greenstone, a University of Chicago economist and one of the lab’s principal investigators, said their work will help communities make responsible choices about adapting to climate change.

“What the social cost of carbon does is it provides a bright line on how much society should be willing to spend, such that the benefits from doing that are going to be greater than the cost,” Greenstone said.

Michael Greenstone helped formulate the original unified government estimate of the social cost of carbon. Now he’s part of a team working outside of government to update it.

Greenstone helped develop a unified social cost of carbon about a decade ago. He was a member of an interagency working group formed under the Obama administration. It calculated economic damages from things like sickness and death due to extreme heat and property losses from sea level rise. Today that number would be around $40 per ton of carbon dioxide. The tool makes cost-benefit analyses on climate regulations possible.

“If a policy reduces CO2 emissions at a cost of say $500 or $600 per ton of CO2, which we are currently pursuing some policies that are like that, but yet the reduction in climate damages is only a hundred dollars, that’s telling you we shouldn’t do this policy,” Greenstone said.

Trump has taken actions that have weakened how the social cost of carbon is used in rule-making. Although it would be hard to remove it completely, since courts require agencies to consider the impacts of carbon, he disbanded the interagency working group and left it up to agencies to come up with their own estimates. The Environmental Protection Agency’s estimate is now between $1 and $6 a ton.

Critics of the $40 estimate say it overvalued future damages, focused on global economic impacts rather than domestic ones and relied on models that are open to manipulation.

“Policymakers can manipulate the results to get pretty much any result that they want,” said Kevin Dayaratna, a senior statistician at the Heritage Foundation, a conservative think tank “As a result of that, we really believe that they have no basis for being used in regulatory policy.”

In the executive order that ended the use of a unified government figure, Trump still required agencies to use “the best available science and economics” in their cost-benefit calculations.

The best available could soon get better because of the work being done by the dozens of economists and climate and computer scientists that form the Climate Impact Lab. It includes researchers from the University of Chicago; University of California, Berkeley; Rutgers University; and the Rhodium Group, a research firm.

Research fellows at the Climate Impact Lab collect global data on mortality, agricultural yields and conflicts as part of their quest to update the social cost of carbon.

Project leaders said the estimate they’re building will be a hardier version of the social cost of carbon because it’ll be empirically based.

“This is the first time where we’re using large amounts of real-world data to compute what the cost of carbon is to society,” said Solomon Hsiang, the lab’s UC Berkeley lead.

This estimate won’t be completely based on models, like the original was, but rather on historical data.

That’s daunting because the researchers want to gather data at a super granular level. Earlier models divided the globe into 14 regions. This team is breaking it down into roughly 25,000 county-sized parcels. That’ll give a much clearer picture of who climate change’s winners and losers will be.

The team is a few years away from releasing an overall estimate for the social cost of carbon, but they’re just about ready to begin releasing initial results on mortality. Greenstone said one thing they’ve found is that climate change’s impacts will be felt very differently even within the United States. For instance, additional hot days will impact death rates in Seattle more than they will in Houston.

“Precisely because people in Houston have taken preparations to protect themselves against hot temperatures that people in Seattle have not seen the need to,” Greenstone said.

It’s information that’ll help decision-making, but it’s not clear any of it will be used by the current administration.

“It seems unlikely that they would pick up new data and incorporate it into their decision-making, but we will certainly be advocating that they should do so,” said Benjamin Longstreth, senior attorney for the Natural Resources Defense Council.

He said his group could sue to force agencies to use the new estimate in their calculations.

“Courts will be evaluating whether or not they’ve used the best data available, and we will make sure to hold their decisions to account,” he said.

Hsiang said he doesn’t worry too much about what the federal government may choose to do with the new information.

“I will feel myself satisfied if I just know that I’ve made clear to everybody what the future might look like and what are the different decisions that we have at our disposal,” he said.

They’re making a tool anyone can use, one that’ll redefine scientific understanding. Everything else is just politics.