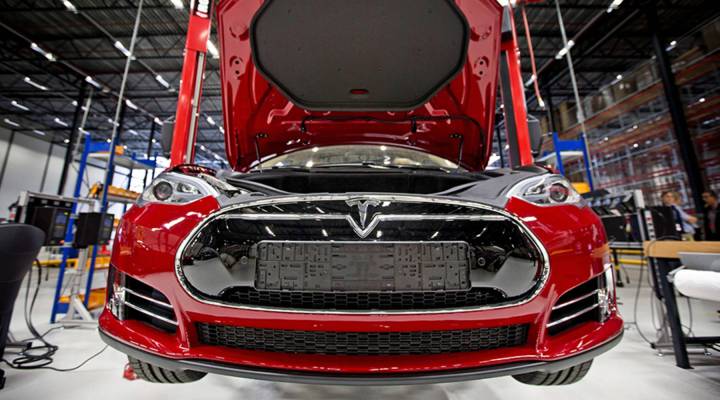 COPY
A view of a fully electric Tesla car on an assembly line at the new Tesla Motors car factory in Tilburg, the Netherlands, during the opening and launch of the new factory, on Aug. 22, 2013. Guus Schoonewille/AFP/Getty Images
Marketplace Tech Blogs

A view of a fully electric Tesla car on an assembly line at the new Tesla Motors car factory in Tilburg, the Netherlands, during the opening and launch of the new factory, on Aug. 22, 2013. Guus Schoonewille/AFP/Getty Images
Listen Now

China is a huge market for electric cars. Tesla is looking for a place to build and sell lots of electric cars. But the U.S. is in a trade war with China and right now there’s about a 40 percent tax on American-made cars being sold in China. That hurts all automakers, but if you’re trying to become the dominant electric car maker in the world you need to sell cars in China. This week Tesla said it will open a plant in Shanghai to eventually build 500,000 cars a year without the import taxes. But in the meantime, Tesla raised prices in China — a Model S now costs about 70 percent more there than it costs in the U.S. Dan Sperling is the founding director of the Institute of Transportation Studies at the University of California, Davis. He spoke with Marketplace Tech host Molly Wood about how the Chinese government is changing the market for electric cars. The following is an edited transcript of their conversation.

Dan Sperling: China is requiring companies to sell them and providing large incentives to the buyers to buy them. They are now accounting for about half of the electric vehicles in the entire world. But most of those are local companies.

Molly Wood: So, as we look at the EV market through the lens of this trade war and the tariffs that have just been announced, does that give a boost to these Chinese manufacturers by, for example, causing Tesla to have to raise its prices on cars it’s selling there?

Sperling: Well certainly in the near term it’ll be fine for China and maybe even good because it means that it favors their domestic companies making electric vehicles and that means that it makes it more difficult for companies like Tesla.

Wood: In that case, how important is this moment, however long this trade war last in this particular point in time, how important is it for electric cars? I mean is the company that gets it right now, or gets this kind of artificial boost, going to end up being a market leader for the next 40 years?

Sperling: Well if you look at it in terms of Tesla, Tesla is the most important electric vehicle manufacturer in the world. They’ve set the benchmark for the other companies. The question is, what does this mean? It endangers Tesla because they are financially having difficulties. They have cash flow problems and they have lots of risk.

Wood: Fundamentally it seems like the question is, does Tesla need China more than China needs Tesla?

Sperling: China does not need Tesla. Tesla needs China much more. They have a large percentage, something like 15-20 percent of their sales is in China. And for those of us interested in electric vehicles, Tesla is hugely important. They are creating the benchmark for everyone else. They are motivating others to make the investments. And if Tesla falters that’s bad for all of the international car company’s investments in electric vehicles: GM, Ford, Mercedes, all of them.

Wood: The major component of electric vehicles is the battery and whoever can improve upon that technology seems like they could end up being a winner regardless of whether they actually make or sell a lot of cars. Is that fair?

Sperling: Yes. China is lagging in both vehicle quality and batteries. But China is catching up and they’re making mammoth investments. One of the advantages China has, it’s a massive market there. And if we start trade wars and trade barriers, it’s going to basically allow them to build up that industry with a little bit more protection.