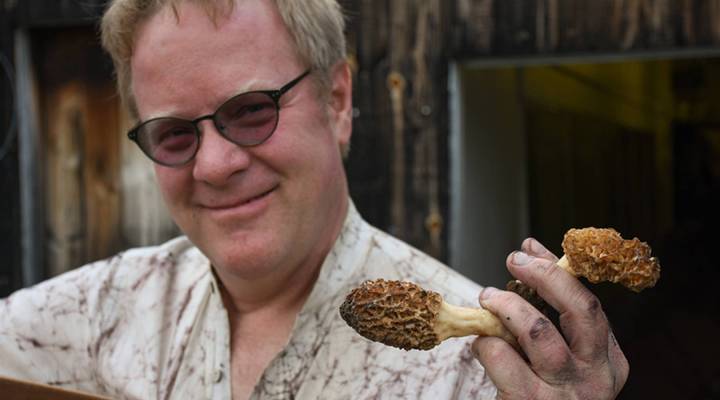 COPY
Tad Montgomery holds up a handful of fresh morels, picked just that day. The mushrooms will get ground up and distributed over the soil, in hopes of seeding another generation next year. Courtesy of James Napoli

Tad Montgomery holds up a handful of fresh morels, picked just that day. The mushrooms will get ground up and distributed over the soil, in hopes of seeding another generation next year. Courtesy of James Napoli
Listen Now

Tad Montgomery can still remember when he first discovered morels. He was five years old, working in the garden with his mom and siblings, when a thunderstorm suddenly rolled in. They all ran under some nearby trees for shelter.

“Mom, what are these things? They’re really weird!” exclaimed his sister, looking to the ground.

His mom had no idea what to make of the brown, brain-looking things emerging from the soil. But, being an amateur naturalist, she piled all the kids in the car and drove them, soaking wet, to the local library. There, they unfolded their hands for the librarian, who knew exactly what she was looking at. “Morels! You found morels!” Montgomery remembers her yelling with glee.

And so began his lifelong, at times quixotic, pursuit of one of the most desired fungi. Morels are prized for their taste, but also because they’re difficult to find, said Dave Wichland, who runs a mushroom business in southern New Hampshire. He cultivates mushrooms and also forages wild varieties.

Morels look similar to wrinkled leaves, which makes them difficult to pick out on the forest floor. In Vermont and New Hampshire, the best farm-to-table restaurants will pay upwards of $20 per pound for the mushrooms. In places like New York City, Wichland said, it’s even higher, more than $30 per pound. That’s why people all over the world have been trying to figure out how to cultivate morels, essentially farm them like any other crop. “It’s really getting pressure now because people see value in it,” Wichland said.

Morels are difficult to grow for a host of reasons. For one, Wichland said, they’re really finicky about temperature and moisture conditions, as well as the material they’re grown on.

Tad Montgomery distributes a mixture containing morel spores in an apple orchard in Lebanon, NH. He’s been trying for years to cultivate the mushrooms in orchards spanning the Vermont-New Hampshire border.

Montgomery is pretty good at foraging morels in the wild. But recently, he’s been taking a stab, quite literally, at cultivating them as well. On a recent evening, he worked a pitchfork over the ground in an apple orchard in Lebanon, New Hampshire, making small holes in the soil around the base of a tree. Next, he dipped a cup into a bucket filled with a dark liquid, and distributed that concoction over the holes he’d made.

The liquid contains morel spores, the reproductive unit of the mushroom. The recipe is secret. By Montgomery’s thinking, though, it’s not just the ingredients, but also the location, that’s important. That’s because morels are known to favor certain trees, including apple trees. Montgomery is trying to leverage this natural pairing. He’s betting orchards could be a key to this cultivation business, an idea others haven’t quite caught onto yet.

As an investment, this experiment isn’t costing him much, mostly just his time. The orchard’s owner, Steve Wood, also sees more upside than downside in the endeavor, though he’s quick to point out he’s not optimistic about its success.

Judging by Montgomery’s results so far, Wood may not be wrong.

Montgomery had no morels emerge this spring on sites he’s treated over the past several years. Still, he’s not losing hope, just adjusting the recipe to try again. This year, he’s using spores from mushrooms that were actually found at other orchards, rather than in the woods.

So, maybe next spring, he says with a smile. After all, you really never know when they’ll pop up.