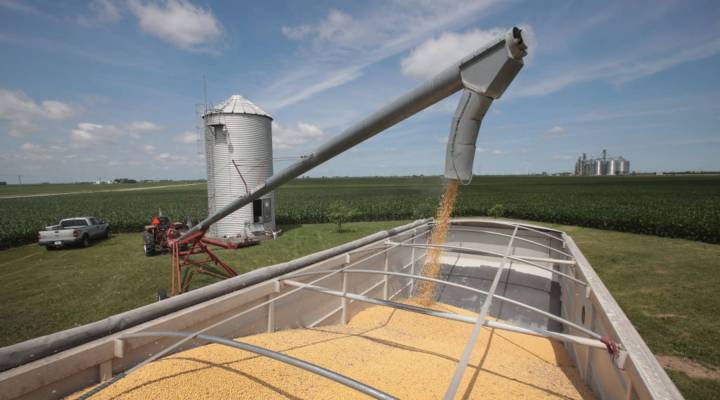 COPY
Farmer John Duffy loads soybeans from his grain bin onto a truck before taking them to a grain elevator on June 13, 2018 in Dwight, Illinois. Scott Olson/Getty Images

Farmer John Duffy loads soybeans from his grain bin onto a truck before taking them to a grain elevator on June 13, 2018 in Dwight, Illinois. Scott Olson/Getty Images
Listen Now

As of 12:01 eastern this morning, computers at U.S. customs should have been reconfigured to apply new tariffs on $34 billion worth of Chinese goods, which include printers, cars and industrial parts.

At about the same time, China authorized something similar in reverse, issuing penalties on American cotton, soybean, pork and cars.

President Donald Trump says he has tariffs on hundreds of billions of dollars in more Chinese goods ready in his pocket — if it comes to that — while China says the U.S. has launched the biggest trade war in history.

But Shaun Rein, founder of China Market Research Group and author of the book “The War for China’s Wallet,” told us he has a different take on this situation. Below is an edited transcript of our interview with him.

So you don’t think these U.S. tariffs and Chinese counter tariffs today are here to stay?

I view these tariffs as a negotiating ploy by President Trump to try to force the Chinese to open up their market better for American companies. Because frankly, Trump is right to criticize China. It’s very difficult for American companies in the auto sector or in financial services to sell into the China market, because there’s a lot of regulatory barriers. Good luck if you’re a technology company. However, I think he’s wrong for talking about the trade imbalance. Instead, he should be talking about reciprocity and allowing American companies the same rights in China that America grants Chinese companies when they try to invest and operate in the United States.

All right so tariffs are a negotiating tactic. That conjures the image of this being a cool, calm, collected game of chess on both sides: Washington and Beijing. But the thing is some say the trade war started this morning, and in a war, it’s not always calm or controllable or rational.

Trump needs to be careful that he doesn’t go too far and cross a red line and he’s very close to doing that right now. President Xi, the president of China, is taking a much longer view than Trump because China’s presidency doesn’t have term limits. And President Xi is enjoying, like, 90 percent support from the Chinese population. He feels he can take a very strong line against Trump. And he also wants to indicate to his neighbors and the rest of the world that China is the new superpower that they need to get close to.