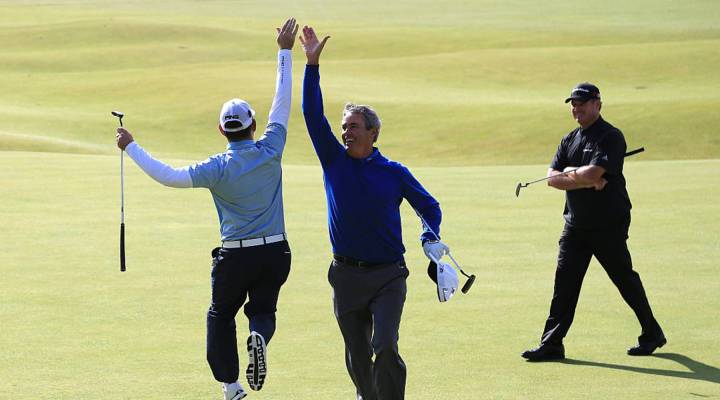 COPY
A 5-hour workday at the financial services firm Collins SBA has given employees more time to devote to their hobbies — like golf. Pictured: Ian Baker-Finch of Australia and Louis Oosthuizen of South Africa "high five" on the 18th green as Todd Hamilton of the United States looks on during the Champion Golfers' Challenge.  Matthew Lewis/Getty Images

A 5-hour workday at the financial services firm Collins SBA has given employees more time to devote to their hobbies — like golf. Pictured: Ian Baker-Finch of Australia and Louis Oosthuizen of South Africa "high five" on the 18th green as Todd Hamilton of the United States looks on during the Champion Golfers' Challenge.  Matthew Lewis/Getty Images
Listen Now

Market watchers are encouraged by the June jobs report, released today. The economy added more jobs than expected but the unemployment rate rose as more Americans entered the labor market.

But wage growth didn’t rise as much as analysts expected which got us thinking: What if you could cut your hours without losing any pay? One Australian financial services firm, Collins SBA, has put ALL its employees on a 5-hour workday — as long as they meet their clients’ needs within those hours.

And it’s yielded happy results, according to the firm’s operations director, Claudia Parsons. Below is an edited transcript of our interview.

Claudia Parsons: Everyone needs to be in the office by no later than 9 in the morning and that’s when the five hours start ticking.

Anu Anand: Seriously, though? Productivity hasn’t dipped a bit, if everyone’s just looking at the clock thinking, “Woo, five hours and I’m off”?

Parsons: I know, it’s fascinating but productivity hasn’t dropped. We have found that productivity has actually increased across the board because people are looking for clever, more effective ways of doing their job. Interestingly, we’ve noticed that sick leave has dropped by around 12 percent and we think that’s because people have more time now to relax, more time to exercise, more time to spend with their friends and family. Likewise, employee engagement has gone up dramatically. We’ve run quite a few client surveys and everybody’s really engaged and motivated.

Anand: And there have been other changes, too, haven’t there? Like no hour-long, sit-down meetings. I mean, those are just the scourge of the workday.

Parsons: I must admit: No one’s terribly sad to see the end of long meetings. So the vast majority of our meetings are stand-up meetings and that means that people don’t get comfy in their chairs and waffle on, which has been great. And we’ve also really, really critically evaluated the agenda for the meetings to make sure that there’s no padding, that they don’t go for any longer than absolutely necessary.

Anand: And what do people do with all that time off every day?

Parsons: Ah, that’s a great question. Well, people are doing a variety of things. I’m a working mother, so I’m spending a lot of time  picking my children up and spending a lot more time attending their sporting events after school. But likewise, even for the team members who don’t have children, one of them in particular is an avid golf player and he’s working really hard on reducing his golf handicap and others are spending a lot more time at the gym and with friends and family.

Anand: And are you getting other companies knocking on the door saying: Should we do this? Or are people skeptical? I think that in people’s minds, even workers, the number of hours is still linked to the quality of the work.

Parsons: We’ve had a lot of interest from other businesses in the concept, but as far as we’re aware, no other business has taken on the challenge of trying to roll out a 5-hour workday. I couldn’t encourage people more strongly because the impact that it’s had on our workplace and our team members has just been breathtaking.