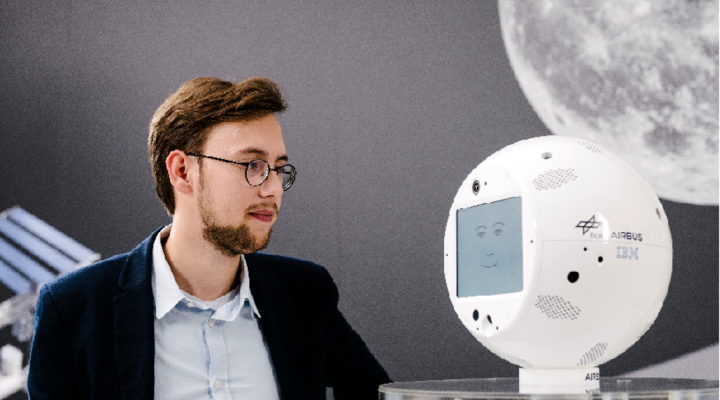 There is a long history in sci-fi of robots accompanying humans in space. These robots’ ambitions have run the gamut, from those that try to embrace their humanity (like Data from “Star Trek”) to others that try to kill us (like HAL from “2001: A Space Odyssey”). But before we can know whether real-life robots will help us or turn on us in space, we have get them up there.

It arrived on the International Space Station on the back of a SpaceX rocket on Monday. It’s about the size of a soccer ball with a very low-res digital face. It’s meant to float around the space station autonomously and come over to help astronauts whenever they need it. CIMON is a joint project between IBM, Airbus and the German Aerospace Center.

“CIMON itself it’s a so-called ‘technology demonstrator’ that will be used only on the International Space Station as a crew assistant,” said Matthias Biniok of IBM, one of CIMON’s designers. “But the base technology behind it is commercially available, and can be used on other projects.”

CIMON has a sci-fi foundation, too. The robot is based on a comic TV show called “Captain Future.”

“There was a little flying brain called Professor Simon, and that’s where it actually comes from,” Biniok explained.

So why a flying brain instead of a humanoid robot? It’s a lot easier to get work done when you have a digital assistant right next to you.

“Imagine you are an astronaut and you have to do a complex task — say, crystallization,” Biniok said.  “Right now, you have to go back to the laptop. But what if you had a space companion that you could just ask for a response?”

CIMON is like an orbital Siri or Alexa, floating around with space station manuals and tool recommendations. But with all the concerns about automation pushing humans out of jobs, should astronauts be worried?

“An AI should always be an assistance system,” Biniok said. “We are talking about augmented intelligence instead of artificial intelligence. We don’t want to create a new astronaut up there.”