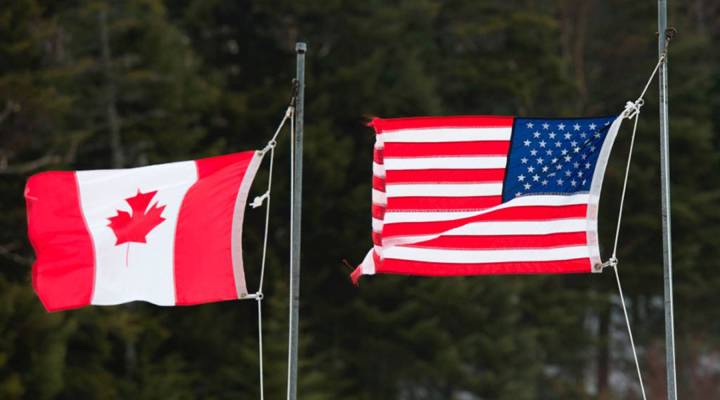 From immigration policy to the trade war that’s upending global commerce, one of the hallmarks of the Trump presidency to date has been his focus on borders. Just this week, Canada hit back against President Donald Trump’s steel and aluminum tariffs with its own tariffs on steel, aluminum and other U.S. goods. That’s one of the reasons that Marketplace host Kai Ryssdal talked with Porter Fox, who spent three years exploring the 4,000 miles of the U.S.-Canadian border lands from Maine to Washington state for his new book, “Northland: A 4,000-Mile Journey Along America’s Forgotten Border.” The following is an edited transcript of their conversation.

Kai Ryssdal: Give me a sense of what it’s like when you’re actually out there. I mean did you know where the border was most of the time, or were you hiking and canoeing and just kind of going on your merry way west? And actually, did American authorities know where you were? Since we’re, you know, in theory keeping a closer eye on our borders.

Porter Fox: Well that’s the big question. I crossed the border dozens of times on many different occasions mostly because I was completely lost.

Fox: It is wild, wild country. You’re talking about some of the largest roadless areas in the United States; the boundary waters of Minnesota, the north woods of Maine. I mean, these are places where you can just walk for hundreds of miles and not run into anything. So, it was very hard to know where I was and especially in these back country areas. There’s just hardly any indication of what is Canada and what is the United States.

Ryssdal: And that’s the thing that comes through in this book and part of that is just the way the population density works out. I mean for us the northern border is — and apologies to everybody who lives there, I’ve been up there and I like it and it’s lovely country — but it’s remote and almost empty. But something like 90 percent of Canadians live within like 100 miles the American border or something?

Fox: Yeah. They think it’s kind of hilarious that Americans don’t go close to their northern border and don’t really pay much attention to it. But 90 percent of them are within 100 miles of their southern boundary, and it’s very unpopulated. About 10 percent of the U.S. lives along the U.S. northern border and much of that is in border cities like Detroit and Bellingham. You know, you get into North Dakota and Montana and it’s just wild country.

Fox: Absolutely and that’s how a lot of it was settled. The timber trade, the fur trade. In modern times you’re looking at the Bakken oil play, the shale play. And so, that’s why a lot of those communities in the northland are where they are.

Ryssdal: Talk to me for a second about the cross-border economic dynamic right? We hear about it on the southern border all the time, the maquiladoras and NAFTA and imports and exports. The Canadian trade relationship with the United States and the amount of trade going in coming across that border is monumental.

Fox: It’s the busiest international border in the world. You’re talking about $2 billion, nearly two billion in goods and services and 400,000 people legally crossing the line every day.

Fox: And you’re looking at, you know giant U.S. industry like the auto industry. You know an American-made car can cross the border up to seven times. There’s a border town in northern Maine where Canadians are cutting wood on one side of the line and bringing it over the line to mill it and then trucking it back over again. There are folks that drive those trucks that run those chainsaws. You know, the border has, has been very permeable since the very beginning cross-border trade was there before the border was there.

Author Porter Fox explored some of the U.S.-Canada border aboard a 740-foot freighter owned by Canadian company, Algoma Central Corporation

Ryssdal: When you got to the end out on the Pacific coast, what was your takeaway from this whole trip?

Fox: Well, I really saw the northern tier of the U.S. as a kind of standalone region. You know, that was what I was kind of hoping I would find. Another thing that I realized was, that this border was, how do I say this, not taken seriously? The border was incredibly porous, and you know some people would take that as being very alarming, but in reality, that was kind of how it was made. It was always called the world’s friendliest border and it was that way so that the U.S. and Canada could do business together. It’s hard to talk about border security and say, well sure, you can walk across the line wherever you want, but the answer is not to just lock it down. You know the line is not hard and it probably shouldn’t be for the sake of both of our economies.

Click here to read an excerpt of “Northland: A 4,000-Mile Journey Along America’s Forgotten Border.”