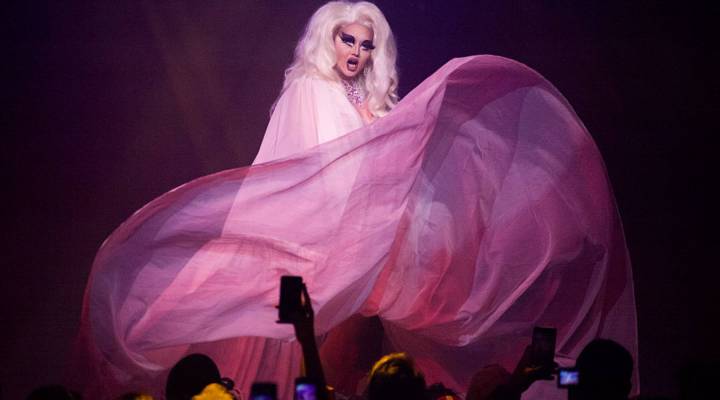 Drag queens aren’t just entertainers. Some businesses have found that they can be great spokespeople, too. For example, two of the top products for the makeup company Sugarpill are an eyeshadow and lipstick named Kim Chi, after the drag queen who competed on the reality show “RuPaul’s Drag Race.” Sugarpill wouldn’t reveal revenue figures, but it says the two products named for Kim Chi are among its top sellers, and have sold out several times since their debut.

“Drag queens are the new pop stars,” explained Randy Barbato, co-creator of “RuPaul’s Drag Race” which is wrapped up its 10th season last week. “Drag queens haven’t changed, but the audience has. The only reason they haven’t been accessible in the past is because people haven’t been able to see them.”

A record-breaking 50,000 of their fans were able to see them up close in early May during RuPaul’s DragCon at the L.A. Convention Center.

“They honestly start the trends,” said 22-year-old fan Marissa Lara. “Big makeup is not a thing that a lot of girls do, but I think it’s very inspiring to just go all out and not care what people think.”

At DragCon, attendees spent over $4 million on wigs, makeup, art and more.

That kind of business and marketability might’ve been completely unheard of not too long ago. If an ad agency featured a drag queen, they usually represented surprise and deception because a man was dressed as a woman, said LGBT marketing expert Bob Witeck.

“That’s the way marketers often had seen it,” he said. “They never took the drag queen seriously as a person who had an identity in their own right.”

But now thanks to a cultural shift partly driven by millennials and the younger generation, the perception of drag queens in popular culture has changed.

Younger people are “certainly hungry for new ideas and new ways of talking about identity, new ways of looking at it,” Witeck explained.

“I grew up in drag bars, and I developed my beauty standards by going to drag bars,” explained Sugarpill founder Amy Doan, who frequently collaborates with drag queens in promotional campaigns. It’s a strategy that’s paid off. Her sales get a bump anytime a drag queen posts one of their spectacular looks online and credits Sugarpill. And the company’s most watched YouTube videos are ones that feature Kim Chi and other drag queens.

It’s more than makeup. Companies that create products like wigs, t-shirts, dresses and more all notice that a wide customer base comes to them when drag queens promote their products.

“We all make choices in the way we package ourselves,” said Barbato. “Drag queens make extraordinary choices, and I think that’s inspirational to people.”

This article originally ran on KPCC.