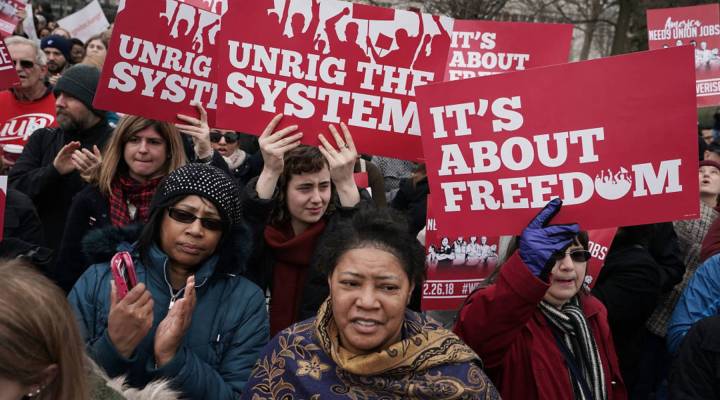 COPY
Activists rally in front of the U.S. Supreme Court back in February over the Janus v. AFSCME case. Alex Wong/Getty Images

Activists rally in front of the U.S. Supreme Court back in February over the Janus v. AFSCME case. Alex Wong/Getty Images
Listen Now

The conclusion of the Janus v. AFSCME case brings a major disruptive change to how public sector unions would potentially operate, so what will these unions do next?

Sabri Ben-Achour spoke with Benjamin Sachs, professor of labor and industry at Harvard Law School for some insight. Below is an edited transcript of the interview:

Sabri Ben-Achour: Do we have a sense of how this would actually change union membership? I mean, are there a lot of people out there who are not members of unions but were still paying some substantial amount of money to unions?

Benjamin Sachs: The ultimate answer to your question is it depends. There are certainly a number of people who are paying what we call agency fees or fair share fees today. I think that the threat is what Justice Kagan lays out in her dissent in the opinion and what she calls a collective action problem of nightmarish proportions. A good analogy is if you imagine that the government decided that taxes were voluntary. What would happen is fewer people would pay their taxes and the ability of government to provide services would then erode. That’s what we call a free rider problem or a collective action problem and that’s the problem that’s now been foisted by the U.S. Supreme Court on public sector unions.

Ben-Achour: Do we not already have a little bit of a collective action problem already? Because if you can get away with benefiting from union activity while just paying a lower agency fee instead of the full dues, isn’t that happening already?

Sachs: In some sense we already have a collective action problem with respect to union political activity. So ever since this decision in Abood [v. Detroit Board of Education] which was overruled yesterday everybody had to pay their fair share for the union’s economic activities; that is the union’s role in negotiating you a raise, the union’s representation of you, if you get fired and the union has to pay for lawyers to defend you. All of those things were covered by the agency fee and that agency fee overcame the free rider problem. That’s the system that the Janus court has now dismantled.

Ben-Achour: Is there any way for unions to say “Well OK fine, if you’re not going to pay the fees or pay the dues, you just don’t get the raises that we negotiate.”

Sachs: So under current law there is no way for unions to do that. It is possible after Janus that states could respond to the Janus holding and say look, if unions can no longer require people to pay their fair share then unions ought to have the right to decide for themselves whether or not to represent people who don’t pay for their representation. I don’t know how that would play out. It would be interesting to see it would be risky for the union project which after all is about everyone being in this together.