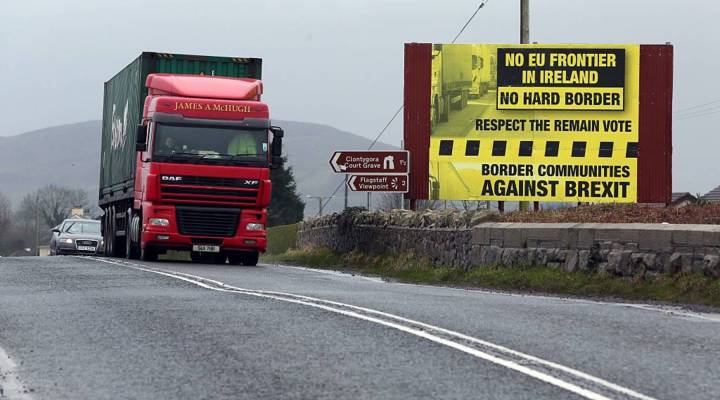 COPY
Traffic crosses the border into Northern Ireland from the Irish Republic next to a poster protesting a hard Brexit. PAUL FAITH/AFP/Getty Images

Traffic crosses the border into Northern Ireland from the Irish Republic next to a poster protesting a hard Brexit. PAUL FAITH/AFP/Getty Images
Listen Now

The border between the British province of Northern Ireland and the Irish Republic is proving one of the thorniest issues arising from Brexit.

The Dublin government, backed by the European Union, is demanding that the border remain as open as it is today, after the United Kingdom leaves the European Union. The concern is that customs checks would hinder trade between north and south and might even reignite the old, violent struggle over a united Ireland.

But how do you ensure that people and goods can cross that border smoothly and without interruption while at the same time imposing the controls — and possibly tariffs — that may well become necessary after Britain’s departure from the bloc?

Technology is the British answer. What technology, and how would it work?

“There’s a whole combination of things that are available and are in use around the world,” said Steve Walker of MAV Systems, which manufactures automated border equipment. “On the American borders, on the Norway and Sweden border, the No. 1 solution is [Automatic Number Plate Recognition]. That will record every vehicle as it comes down the road towards the border,” he said.

Other technologies can be deployed alongside ANPR, such as weigh-in-motion devices. A metal plate in the road can measure the weight of the vehicle as it passes by. Radar and lasers can also outline the shape of the vehicle, matching it with those of registered exporters or importers.

David Trimble, former first minister of Northern Ireland, believes there is an even simpler, less conspicuous and smoother way of monitoring border traffic and — if need be — levying tariffs.

“The solution’s very simple,” Trimble told the BBC. “You marry together a satellite navigation device and a mobile phone and put them in the cab of the vehicle. The technology is there. It needs to be polished up a little bit, but that’s all you need.”

But not everyone agrees that technology provides such easy answers to the border conundrum.

Martin Gallen, who lives and works in the Northern Irish border town of Strabane, said he and many of his neighbors resent the thought of being photographed and monitored as they go back and forth across the border.

There are also doubts about the technological solutions on the Irish side of the border.

Martin McVicar is CEO of one of Ireland’s most successful homegrown businesses. His Combilift company makes innovative forklift trucks and recently opened the country’s largest single manufacturing facility in the border county of Monaghan. He is skeptical that automated border controls could cope with his complicated European supply chain.

“We could be asking our transport company to pick up some axles in Germany, stop then in France and pick up other components, then maybe stop to pick up motors in Scotland before coming here,” McVicar told Marketplace. “When you have transport vehicles that have mixed loads, it’s really hard to imagine how the existing technology is going to work efficiently. There would have to be some manual checks, and that is going to involve delay and extra costs,” he said.

The European Commission and the Irish government have both dismissed Britain’s proposed technological solutions as impractical.