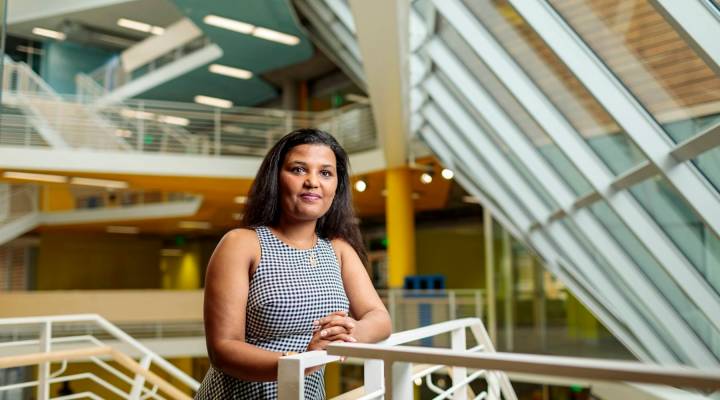 COPY
A view of Samrawit Biyazin, a Portland State University graduate who has been blind since she was a child in Ethiopia. She said that “coming here, I realized that blind people can study anything they want, so I said to myself, 'I’m going to try to study something math-oriented, number-oriented.'" NashCO Photography
Economics of Disability

A view of Samrawit Biyazin, a Portland State University graduate who has been blind since she was a child in Ethiopia. She said that “coming here, I realized that blind people can study anything they want, so I said to myself, 'I’m going to try to study something math-oriented, number-oriented.'" NashCO Photography
Listen Now

As the job market improves and unemployment keeps falling, more people are finding work for the first time or getting back to work after long bouts of unemployment. That includes, in particular, people with disabilities.

“It’s a group that is often overlooked,” said John Kelly, vice president for government affairs at SourceAmerica, a national nonprofit that promotes employment for people with disabilities. “It’s sort of the last talent pool that many employers have looked at historically. But as the labor pool tightens, suddenly that’s a much more appealing group.”

New Seasons Market is one of the employers seeking those workers out. The company, based in Portland, Oregon, operates 25 grocery stores on the West Coast with approximately 4,000 employees. Staffing director Dana Pratt said that after the Great Recession, the company had its pick of overqualified applicants desperate for a grocery job. But that is no longer true.

“There’s been a big shift from those days, when we had over a hundred people applying for a cashier or courtesy clerk position,” Pratt said. “A lot of people who came to work for us during the recession, have since gone out and gotten their dream job. We can’t wait for people to come to us, we have to go find them.”

Pratt said the company has always hired workers with disabilities. Now, the effort’s on steroids. “We really have to hire for attitude and capabilities, and do a much better job of training people up,” she said. “We build partnerships with other people who can help us source and train applicants who wouldn’t come to us otherwise.”

According to the U.S. Bureau of Labor Statistics, there are 6.1 million people with disabilities in the workforce as of May 2018. The percentage of them who are unemployed has fallen by nearly half since 2011, to an average of 8 percent in 2018.

“New users will listen slower,” Lazzari said. “Over time, and with experience, they want to get as fast as possible. We’re looking at people getting as efficient and competitive as they can. The faster you can listen, the faster you can complete your work tasks.”

Samrawit Biyazin has done a lot of training at the Commission, and learned a variety of skills.

Biyazin has been blind since she was a child in Ethiopia.  She came to the U.S. as a political asylee from Ethiopia in 2013. “Coming here, I realized that blind people can study anything they want, so I said to myself, ‘I’m going to try to study something math-oriented, number-oriented.’ I took two accounting courses and I really fell in love with it.”

She already had a bachelor’s degree in law from Ethiopia. She enrolled at Portland State University and recently graduated with a second bachelor’s degree — in accounting. She has landed a job in tax accounting at PricewaterhouseCoopers in Washington, D.C.

Biyazin said she has to do a lot of improvisation to get computer programs to screen-read mathematical equations. Another professional challenge she’s faced: navigating job fairs and networking events. “It’s really hard as a blind person,” she said, “because there are so many noises, and you don’t even know where the person you are talking to is standing. But we have to do it.”

Tina Anctil is an associate dean at Portland State University and former director of the university’s program that trains disability rehabilitation counselors. She said that even in a tight labor market, getting a job interview can be hard for someone returning to work after an illness or injury.

“People with disabilities oftentimes have gaps in resumes,” she said, “because of illness, recovery, or discrimination they’ve faced in the workforce.”

Anctil said that managers can take a variety of steps to accommodate a worker with disabilities.  “A lot of times, it’s simple things like: I need a flexible schedule, I need a sit-stand desk, maybe this one piece of software for my computer. I might need one particular supervisor to check in with, so not everyone knows what’s going on with me, and that decreases my anxiety.”

According to the federal Job Accommodation Network, six in ten employers report no additional cost to accommodate workers with disabilities.

At New Seasons Market, Dana Pratt said workplace accommodations have ranged from providing magnifying glasses and wheelchair-accessible cashier stations, to allowing guide dogs in stock rooms. “What we find is that the accommodation for people is usually a lot easier than you initially fear,” she said.