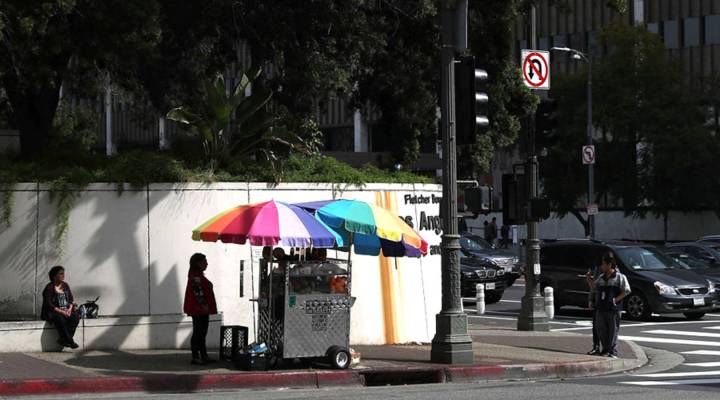 COPY
A street vendor sells fruit in Los Angeles in 2017. It's the only major U.S. city where street vending is illegal. Justin Sullivan/Getty Images

A street vendor sells fruit in Los Angeles in 2017. It's the only major U.S. city where street vending is illegal. Justin Sullivan/Getty Images
Listen Now

On a recent afternoon in Los Angeles’ wholesale district, Ashley Roberts is crouched beside a sidewalk display of clothes, DVDs and phone accessories. What she’s doing is illegal, but Roberts said getting a good spot determines whether she’ll make enough money to eat today.

“It all depends what area you set up at, whether the cops are going to bug with you,” Roberts said.

Roberts has already received two citations in the few months she’s been street vending. She’s also regularly negotiating with businesses, like the sunglass wholesaler she sells in front of.

“They don’t mind. As long as you’re not blocking the sidewalk or, you know, taking their customers,” Roberts said.

You wouldn’t know from all the fruit vendors and taco carts around, but Los Angeles is the only major American city where street vending is illegal. Vendors face citations, fines and, in the past, even arrest and misdemeanor charges for sidewalk selling.

That’s changing. In April, city officials approved a framework to overturn the longtime ban on sidewalk sales. A city ordinance to legalize the practice is expected to be on the books by the end of this summer.

It’s not just traditional brick-and-mortar shops that clash with street vendors. On Hollywood’s hectic Walk of Fame, Gulay Karan pays $5,000 a month in rent for her hat kiosk, Gulay’s Hats. This is prime real estate, packed with thousands of tourists and shoppers.

But just feet away on the terrazzo sidewalk, unregulated vendors who pay no rent erect their folding tables right on top of some of Hollywood’s signature bronze stars, unloading cheap tchotchkes.

“We don’t want them here, that’s for sure,” Karan said. “As you can see, they put up a lot of tables, and then they get lots of attention. It’s not fair.”

Despite the fear of fines, having to constantly relocate and other hassles that come with street vending, street vending is worth it for many. There are about 50,000 vendors operating on LA’s streets in a given year. Vendors here earn an average of $10,000 annually.

Rudy Espinoza is with the LA Street Vendor Campaign, which recently stepped up its efforts to legalize these workers.

“It really only caught momentum when in 2016, we elected a new president,” Espinoza said.

Espinoza said most of the city’s street vendors are immigrants, many undocumented.

“We shouldn’t be looking to criminalize or exclude these folks,” Espinoza said. “These are hardworking people who say, ‘I don’t want a handout, I just want an opportunity.’”

Under the proposed ordinance, Los Angeles will require vendors to get permits, pay taxes and follow new regulations.

Business groups lobbied hard for property owners to have the right to veto street vending outside their doors. Espinoza’s glad the city rejected that.

“We thought that was wrong,” Espinoza said. “It was cutting out vending. And we thought it would open the door to exploitation.”

Instead, business owners would be notified when vendors seek permits near their doors, and they’d have a chance to lodge an appeal.

Doug Smith is an attorney with civil rights law firm Public Counsel. He said a permit system is the best way to make legal what’s already out in the open.

“LA loves street vendors, but unfortunately, the laws have not,” Smith said. “Banning the activity has had the effect of forcing the entire sector into the unregulated and informal economy.”

Others worry strict permitting and regulation could be too costly for low-income entrepreneurs with few resources.

“The only way for them to survive is for them to engage in this type of activity,” said Dr. Alvaro Huerta, an assistant professor of urban planning and ethnic studies at California State Polytechnic University, Pomona, and an expert on the informal economy.

“We want them to be engaged in activities such as selling tamales and paletas and things like that versus criminal behavior,” Huerta said.

Under LA’s new system, he worries a two-tier system will emerge — those with permits and those without.

“Those that are outside of that permitting process, you’re pushing them further and further into the margins,” Huerta said.