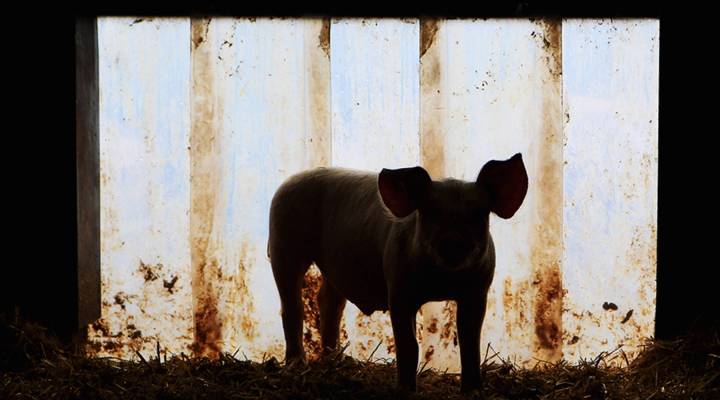 A little more than two months ago, the Chinese government imposed tariffs on a list of American products in return for the Trump administration’s taxes on Chinese steel and aluminum. Beijing went after products like pecans, apples and pork. Back then, we called Brian Duncan, a hog farmer and the vice president of the Illinois Farm Bureau, to see how that would affect his business.

Marketplace host Kai Ryssdal checked in with Duncan to see where things are now. The following is an edited transcript of their conversation.

Kai Ryssdal: So it’s been a couple of months. There are tariffs on American hogs from the Chinese. How are you feeling?

Brian Duncan: Confused. How is that for a good feeling?

Ryssdal: You and me both, pal.

Duncan: Every day that goes by, you know, I’m afraid we’re one step closer down the road to a trade war. Originally, we’d hoped this was saber rattling leading to negotiations, and certainly we hope that’s not off the table yet. But as each day goes by, I wonder when you officially declare this to be a problem.

Duncan: Yeah, it’s mattered a lot on the hog side. And we see it mattering also on the soybean side as far as the Chinese just simply not ordering any cargoes of beans from the United States. And the pork shipments into China have basically disappeared as well. And so it’s really causing a lot of volatility in the marketplace and instability, which makes it really hard to navigate and almost impossible for long-range planning.

Ryssdal: Well, one hates to pry, but given that you are a hog farmer and there are hog tariffs, how’s it looking for you when you go to close your books at the end of the year? What’s your guess?

Duncan: Well, the end of the year isn’t here yet. So I guess we still hope for better things. I mean, it is taking projections, and these aren’t just my projections, these are projections by leading economists that have taken what was going to be a positive year for pork producers and turned it into a negative one. So we’re in June, let’s talk in December.

Ryssdal: We’ll call you back, I’ll tell you what.

Duncan: There you go.

Ryssdal: So as I said, you are somebody in the Illinois Farm Bureau, you can in theory get people at the Department of Commerce on the telephone. What are you hearing from people who ought to know?

Duncan: It is mixed, and it depends on the day, and it depends on who you talk to. It isn’t just me and the Illinois Farm Bureau. Let’s talk about the president’s tweet two weeks ago that said that China was going to buy more goods, and the American farmer could produce $70 billion worth, was the promise I believe. And five or six days later? No, that deal is off the table, that’s gone. We’re not doing that. It’s literally one day to the next, and it’s a changing landscape.

Ryssdal: It’s got to make you crazy.

Duncan: It’s hard to plan. You know, we pour a lot of cement out here in rural America when we make plans and build buildings and livestock facilities. We’re making decisions that have a 20- or 30-year time horizon and payback. And so we ask ourselves, do we want to pour more cement, or do we want to regret the cement we already poured? And I think that’s what a lot of us are doing right now.