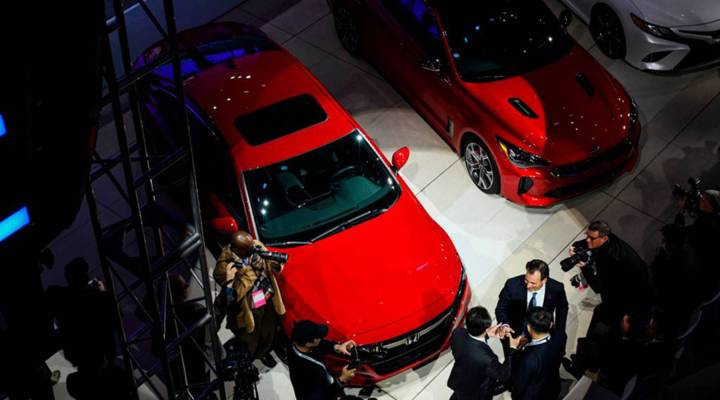 COPY
Honda executives celebrate as the 2018 Honda Accord is named the car of the year at the 2018 North American International Auto Show (NAIAS) in Detroit, Michigan, on Jan. 15, 2018. JEWEL SAMAD/AFP/Getty Images

Honda executives celebrate as the 2018 Honda Accord is named the car of the year at the 2018 North American International Auto Show (NAIAS) in Detroit, Michigan, on Jan. 15, 2018. JEWEL SAMAD/AFP/Getty Images
Listen Now

Sedans; we write songs about them, from the 1964 Impala to a little deuce coupe (OK, that’s a two-door but you get the drift). But it seems we’re changing our tune. Sedan sales have been tanking the last few years, giving way to bigger trucks, SUVs and crossovers.

Just ask Nardos Movsessian. He’s sold cars off and on for 20 years. These days he does it for Star Ford Lincoln in Glendale, California. He says it’s a little tough to push customers into a sedan, like the Ford Fusion, but bigger vehicles?

One of the reasons these bigger cars have been so successful is right in the name — utility, says Kristin Dziczek with the Center for Automotive Research.

“You can open the hatch and put your groceries in at waist level. And getting into a vehicle that’s a little higher up, with a little higher view of the road, is appealing to many drivers as they age,” she says.

And since your average new car buyer is over 50, age factors in pretty big. The real hit to sedans, though, is the crossover, like the Honda CR-V. Size-wise, it sits between a sedan and an SUV. Sales-wise, it’s a monster.

“Currently, 40 percent or two out of every five vehicles sold in the United States is in this category, this CUV, cross utility vehicle,” she said. Typically, fuel consumption has been something that’s kept people in a smaller vehicle, but crossovers are getting better mileage than they used to. “Maybe you compromise a few miles per gallon, but you get so much more space, so much more utility,” she said.

It’s an easy choice for a lot of people. David Friedman, who focuses on cars for Consumer Reports, says new sedans get good fuel efficiency, but all vehicles have improved their MPGs. So there are obvious benefits to someone looking to ditch their old sedan and looking at a crossover.

“They may actually be getting better fuel economy and more size and more safety and more power,” he said. “They’re living in an economy and at a time when the automakers are innovating so much that they can have their cake, and they can eat it too.”

Carmakers are also eating it up: There’s a bigger margin on bigger vehicles. Ford recently announced it would phase out most of its sedans in coming years to focus on big money makers like the F150 truck. Friedman says that’s a mistake, because while bigger cars have gotten more fuel efficient, sedans still win.

Gas prices would have to get really high, like $6 to $8 a gallon for consumers to drive smaller, Dziczek said. For now, she said one thing may keep sedans on the road: big discounts from dealers looking to unload.