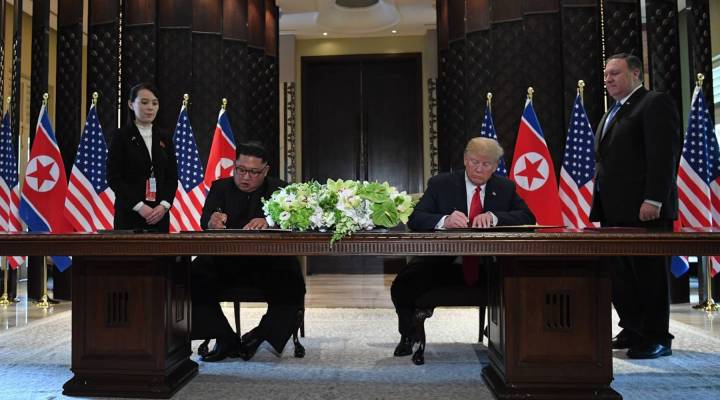 While there were no specifics on a possible relief from trading sanctions imposed on North Korea, Kim has sought their repeal in the past. And in a press conference following the bilateral meeting, President Trump indicated that sanctions could possibly come off at some point.

But according to Leon Sigal, director of the Northeast Asia Cooperative Security Project at the Social Science Research Council, sanctions were not North Korea’s immediate goal of this summit. It was, according to Sigal, building a fundamentally new relationship between the U.S. and North Korea.

Sigal spoke with David Brancaccio about what the larger point of Tuesday’s summit. Below is an edited transcript of their conversation.

Leon Sigal: For development to happen, the most fundamental thing they need is a calm atmosphere where they can reallocate internal resources. The relationship with the United States is not about aid or even investment. The aid and investment and economic integration will obviously come from South Korea, which already has a temporarily suspended joint industrial project on the North Korean side of the border. But the fundamental point with the U.S. is they need a fundamentally new relationship, which would then open up the possibility of investment from other places.

David Brancaccio: So the president didn’t offer a clear answer about whether the U.S. is ready to ease sanctions or not. But we did have China’s Foreign Ministry spokesman there, hinting that China is not wedded to the sanctions on North Korea. So this seems to be a little bit of movement there?

Sigal: Well, remember at this point China is the chief trading partner of North Korea. Russia has also been doing a lot of trade. North Korea has trading relationships with much of Africa, Southeast Asia, [and] South Asia. Those trading relationships despite the sanctions were still continuing. On the other hand I don’t see a lot of sanctions easing and sanctions easing by the U.S. would have almost no economic impact on the North. The important point is they’re the “Trading With the Enemy Act” sanctions and that word, you know, connotes a political impulse that you want to start to kick away.

Brancaccio: What has to happen next to build on this agreement that we saw today?

Sigal: We need specific steps by both sides. And the most important one in my view is we need the fissile material production — production of plutonium and highly enriched uranium — to stop. Talks are going to happen, [U.S. Secretary of State Mike] Pompeo will lead them initially and there’s going to be a second summit meeting. So I would expect some progress on the details. The question is have they already worked out some of these details and they just didn’t announce them? 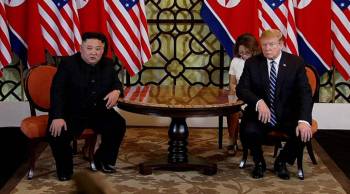