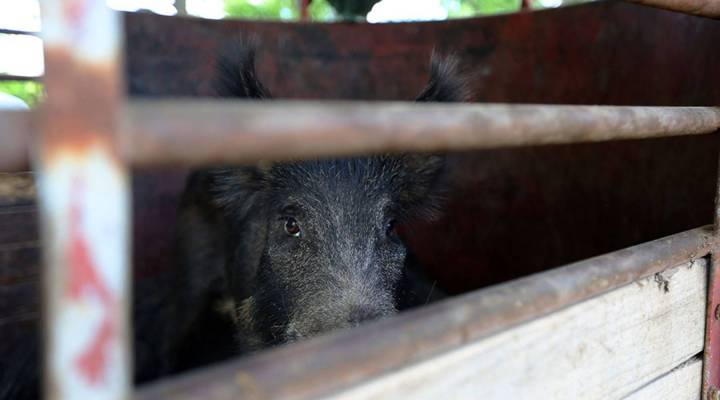 They’re called feral swine, wild boars, feral hogs and wild pigs. Farmers refer to them as the “rototillers” of nature. Found in at least 35 states with a population of more than 5 million, feral swine cause at least $1.5 billion in damages and control costs in the United States each year, conservatively. About a quarter of that damage happens in Texas.

People say the town of Bend, Texas, got its name because it’s located on a horseshoe-shaped stretch in the Colorado River. It’s a couple of hours northwest of Austin in Central Texas with a population of about 1,600 people. Eighty-three-year-old rancher and farmer Jackie Brister farms about 3,000 acres in Bend, mostly pecans and wheat. But nowadays, he also battles feral swine.

83-year-old farmer, Jackie Brister, said feral hogs are going to cause him to lose half of his wheat and pecan yield this year.

“I don’t know how many dollars a year damage hogs do just to me,” Brister said seated at his kitchen table over a glass of iced tea and an egg salad sandwich. “I know some of those fields are going to be reduced maybe 50 percent in the yield, just from the hogs.”

Feral hogs love Brister’s wheat and trample even more of it when they’re rooting around for his fallen pecans.

He guessed the damage could be close to $100,000 a year because feral hogs eat anything: They love Brister’s wheat and trample even more of it when they’re rooting around for his fallen pecans.

Brister’s ranch hand, Roberto Olvera, pointed out where the pigs caused damage in the wheat fields.

Olvera said he regularly spots more than 30 pigs running through Brister’s wheat. He’s set up metal traps all around the field, and when he catches one, he sells it to a meat processor one county over.

Stephanie Shwiff, a research economist at the U.S. Department of Agriculture, is trying to calculate the economic degradation caused by feral swine. She said they’re more destructive than any animal she’s ever studied.

“They will be, and are, they worst invasive species we’ll ever see,” Shwiff said.

She acknowledged the current $1.5 billion estimate doesn’t account for all the damage the swine inflict.

“That stops right at the farm gate,” she explained. “It only incorporates very few things. So that number is going to be low.”

Jackie Brister’s ranch hand, Roberto Olvera, sets up these traps throughout the farm to capture feral hogs. When he catches one, he sells it to a meat processor one county over.

She said it’s one thing for swine to eat wheat, pecans or corn, but these pigs also spread bacteria and bring disease into watersheds. They also destroy fences and even eat baby livestock.

The feral swine problem in Texas probably started in the 1970s, when rural landowners brought hogs to their spreads for exotic sport hunting. But they reproduced so quickly, the population exploded. There’s a saying in Texas that a female feral pig will have a litter of 10 pigs and 12 will survive.

Mike Bodenchuk, the USDA’s director of wildlife services in Texas, has been in charge of monitoring feral swine for more than a decade.

“Research done here in Texas has indicated that between 2006 and 2011, the population increased at a rate of about 20 percent per year,” Bodenchuk said.

At this point, landowners are at their wits’ end. They’re hiring helicopter crews to shoot hogs from the air. And some in Texas are turning that into a business. In 2011, the state legislature passed the so-called pork chopper law. Chris Britt started his company, Helibacon, soon after.

“Texas made it legal for the helicopter company to sell the gunner seat,” Britt said. “It’s the exact same activity, it just exists as a viable commercial activity.”

For about $4,000, Helibacon will fly two people who for two hours will take turns in the gunner seat to shoot at hogs in the fields below.

“You can’t barbecue your way out of this problem,” he said. “We’re an example of what happens when you try.”

The USDA is in the process of testing a chemical toxicant, sodium nitrite, that would be put into hog bait. USDA’s Shwiff is working with the team developing the poison.

In an irony not lost on the USDA, in smaller doses, sodium nitrite is used to cure bacon.