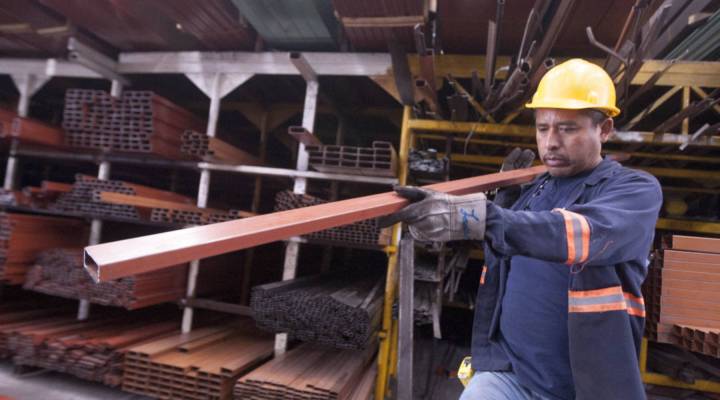 COPY
Mexico announced sweeping retaliatory tariffs on a host of U.S. goods Thursday after the United States slapped steep tariffs on steel and aluminum from Mexico, Canada and the European Union. Above, a man works in a steel distribution factory in Monterrey in northern Mexico on May 31. JULIO CESAR AGUILAR/AFP/Getty Images

Mexico announced sweeping retaliatory tariffs on a host of U.S. goods Thursday after the United States slapped steep tariffs on steel and aluminum from Mexico, Canada and the European Union. Above, a man works in a steel distribution factory in Monterrey in northern Mexico on May 31. JULIO CESAR AGUILAR/AFP/Getty Images
Listen Now

American trade policies are in the middle of big changes. The president has imposed some pretty steep tariffs on three of our biggest trading partners: the European Union, Canada and Mexico. That’s launched a retaliatory tit for tat, with those trading partners responding in kind. So what’s the end game here? Julianne Niemann, executive vice president at Smith Moore, spoke with Marketplace Weekend host Lizzie O’Leary to break it all down. The following is an edited transcript of their conversation.

Lizzie O’Leary: How would you describe the administration’s trade policy right now?

Julianne Niemann: Well, for starters, it isn’t a trade policy. What it is is a steady policy of throwing stink bombs into rooms, having the room clear out and then saying, “OK, let’s sit down and talk.” So what we’re faced with now is the probability of a really bad trade war. We do need to get fair trade. There’s a lot of stuff that has to be negotiated, but it’s called negotiation, not bullying.

O’Leary: Well, when we think about what the administration is doing here, do they have any argument that, you know, these are tough negotiations and they’re trying to get better deals?

Niemann: This is not negotiating. This is demanding and taking it on one side. You’re opening with a fight, as opposed to negotiation. Negotiations take place behind closed doors. You don’t just throw everything out and start all over again. We basically have lost our credibility. We’re not considered to be a steady ally. We’re not considered to be trustworthy, backing up with our word. So we’re being treated with a high degree of well-earned suspicion by virtually all of our trading partners.

Niemann: What is happening, and this is what any good manufacturer is going to do: Start increasing prices now. You still have fairly good demand out there in the United States, you know that your prices are going to go up, so you’re going to have to start taking a look at your profit margins. Price increases are already happening. At the beginning of the year, steel was trading at $651 a ton. Now it’s up to $886. Aluminum, 10 cents a pound; it’s 21 and a half cents now. Will the consumer immediately feel it? Probably not. You know, a penny here, a penny there. But longer term, namely next year, is when it’s really going to have an impact on prices.

Niemann: Everybody over at Granite City steel is positively ecstatic. It means they’re going to be having longer working hours, much more production. But we also have thousands of metal-bending jobs in this town, and they are very concerned. You’re going to see slower production. You’re not going to see expansion plans that companies were planning on. Everything is going to be put on hold until they see where this goes.

O’Leary: You know, we are in this moment where on Friday we got a really good-looking jobs report. There has been, I would say, in the past year, sort of this dichotomy where the administration says one thing, but markets kind of ignore it. Can they continue to do that?

Niemann: New employment is actually going to probably slow down. In fact, next year you’re probably going to see about a quarter of a million fewer jobs posted out there just because of changes in trade. When you don’t have a high number of people going to work, you’re going to have a slowdown in consumption. And it’s all about consumption and the American economy.