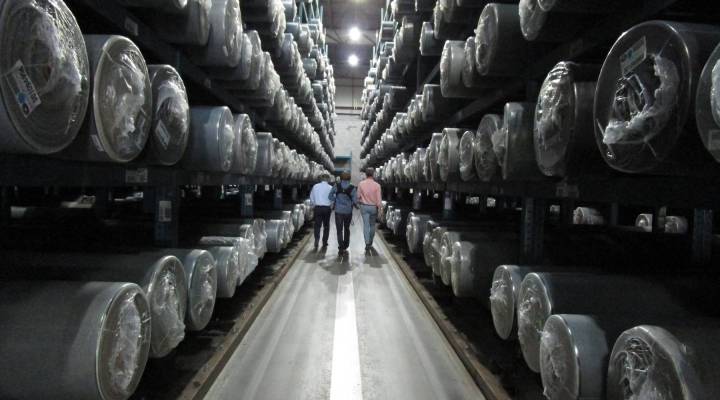 This is part one in our series examining what manufacturing in the economy looks like today in the United States. You can read part 2 here.

Manufacturing in this country has changed. We make things differently than we used to, and it’s a smaller slice of the economy overall than it was just a few decades ago. Marketplace host Kai Ryssdal took a trip down to Columbus, Georgia, to get some insight into the question: What does manufacturing in the economy look like now?

Columbus’s first textile mill opened less than a decade after the city’s official founding in 1828. By the 1850s, the city had five mills. The city’s strategic location on the Chattahoochee River helped make it one of the South’s earliest and largest mill towns.

During the Civil War, Columbus’ Eagle Mill supplied the Confederate army with materials for uniforms, tents and other goods. Though Eagle Mill and Columbus’ other textile mills burned down in the last major battle of the war, part of the complex was rebuilt and named the Eagle and Phenix mill. The Eagle and Phenix mill rose from the ashes of the Civil War to become the largest in the South and produced over 80 percent of Columbus’ industrial output, according to researchers at Georgia State University.

It did not take long for Columbus’ textile mills to rebuild after the Civil War. According to the Columbus Museum’s website, textile mills were major employers in Columbus for the next 125 years.

Monte Galbraith is the owner of DNA Textile Group in Columbus, Georgia. Ryssdal talked to him about a year and half ago for a series on the North American Free Trade Agreement called NAFTA Explained. At that point, DNA Textile was one of three denim manufacturing businesses in the United States and Galbraith was trying to keep his denim business afloat.

“This was a textile town, Galbraith said. “There were thousands of looms and hundreds of thousands of spindles all up and down this area. You know, of course times have changed. Since NAFTA was put into place, just about everybody has gone out of business in the textile business. There’s just very, very few of us remaining.”

When they talked, Galbraith invited Ryssdal to come see his operations in Columbus. Now, with the United States, Canada and Mexico in the process of renegotiating NAFTA, Ryssdal took him up on the offer.

His operation is massive — 275,000 square feet. He showed Ryssdal huge machines, yarn bundles, looms — all pieces of the process of producing textiles and denim.

A loom at DNA Textile Group.

The room where DNA Textiles has its “indigo dyeing range” for dyeing denim is dark.

Galbraith decided to shut down his denim operations this year due to sagging demand and low selling prices.

“We’re transitioning from denim and apparel fabrics to technical specialty fabrics. What you’re seeing here, these are the last run outs of fabric that we were keeping our commitments to our customers,” Galbraith said, showing Ryssdal the giant rolls of denim left in the warehouse. “We’ve been doing business with these guys for 20, 30 years. And we made the decision to get out of the business. We felt it was important to honor these agreements and obligations that we had with them as well as to help them build a bridge to other vendors.”

DNA Textile Group started making denim in 2002. Some of its longtime denim customers were Levi’s, Wrangler, American Eagle Outfitters, Gap, Old Navy, Abercrombie & Fitch and True Religion. His final denim contract is with Polo. All these brands are now bringing in finished jeans primarily from China, Bangladesh, Vietnam and Egypt. In the early days, DNA Textile employed over 350 people. Now, after the latest layoffs in January, it’s less than 100.

“We had 300 folks here the last round of layoffs,” Galbraith said. “These are really good people. Some of them are like family to me that have done nothing but great things their whole life, and now because of trade laws, they are out of work, and they are looking for jobs, and they are scared to death.”

When NAFTA became law in 1994, there were almost 500,000 people working at textile mills in this country making material for everything from sheets to socks, T-shirts and jeans. According to the Labor Department, there are just over 111,000 people who work in textiles as of April.

Now that DNA Textiles is shutting down its denim business, there are just two mills making denim in the United States.

Overall, the number of people employed in manufacturing jobs has fallen from 16.8 million before NAFTA to 12.6 million today, according to the Bureau of Labor Statistics.

How Columbus is moving on

Columbus’ economy has changed. Today, the most common industries by employment are health care, social services and retail. Some of the historic mills have been converted into restaurants, hotels and commercial spaces. The Eagle and Phenix mill is now an apartment building.

Eagle and Phenix mill is now a luxury apartment building.

As for Galbraith, he’s trying to make the turn from being a full-blown denim manufacturer to making technical, high-end fabric, wall coverings, airplane and auto seat covers, and flame-retardant uniforms and clothing. He said the transition will cost his company $7 million.

“You know, and it’s a cliché, but it’s not the biggest and the strongest but it’s most adaptable that survive,” Galbraith said. “And I think we’ve already shown our ability to adapt just to stay as long as we did. Being adaptable is kind of a hallmark of this group of folks.”

The change hasn’t been easy for Galbraith. But he doesn’t think there’s anyway Columbus could go back to its pre-NAFTA economy.

“It still makes you upset that good people when they lose their jobs, but there’s no turning back. No, there’s not any way have I ever said can we go back to the old days because things do change. I just wish I’d looked a little forward and moved a little faster a little earlier.”