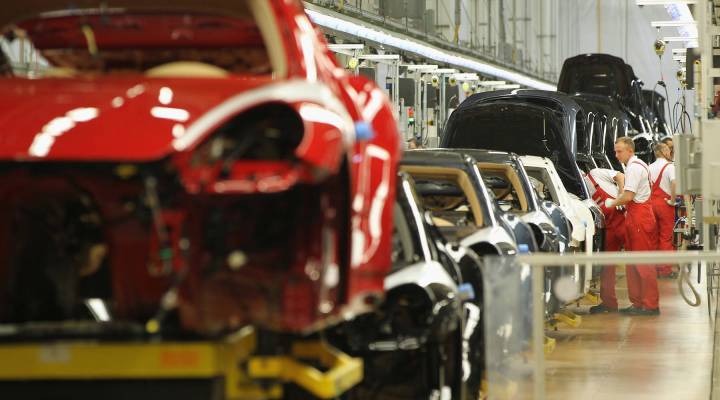 COPY
Workers assemble Porsche Cayenne and Panamera cars at an assembly line at the Porsche factory in 2012 in Leipzig, Germany. Sean Gallup/Getty Images

President Trump is considering imposing higher tariffs on imported cars, trucks and automotive parts in the interest of national security. The automotive supply chain today is global. Some American brands make their cars overseas, some foreign automakers make cars in the U.S. and vehicles are assembled from parts made all over the world. Bill Brebrick is the U.S. sales manager with Zapp Precision Wire, a German steel company with several factories in the United States. Marketplace host Kai Ryssdal talked with him about how his company fits into the global automobile supply chain.

Kai Ryssdal: Do me a favor, would you, tell us a little bit about what your company does.

Bill Brebrick: We’re a family-owned German company, 300 years old. We take raw material — billets or ingots — and we form them, we cold work them. We turn them from big pieces of steel into smaller close tolerance pieces of steel, and then we sell those to people that machine parts or fabricate parts for a wide variety of industries, including automotive.

Ryssdal: Tell me how you work your way into the automotive — where do your pieces, your products, fit on a car?

Ryssdal: So, what did you think last night or perhaps this morning when you read the news of this potential tariff that the president wants to put on imported automobiles?

Brebrick: It’s strange. It’s confusing, because if you look at South Carolina and you look at BMW and Mercedes’ and Volvo’s presence there, people have built factories near these plants just to better support them. It’s the way the business works today. It’s truly a global market. You know, the suppliers are in the market and close and employing lots of people, so it’s odd to think of these companies as being, you know, a threat in any way.

Ryssdal: When you sit back and look at the American car industry then, and I mean all of them, right — the Fords, the GMs, but also the BMWs in South Carolina — what is it in your mind that makes an imported car an imported car?

Brebrick: Well, the only thing that makes up a German car a German car, or Japanese car a Japanese car is where their headquarters is. And OK, maybe the profit dollars go back there and maybe there’s shareholders there. But the car itself, the components, the assembly, the manufacturing, the subcontractors, the supply chain is often in that country, and in the U.S., that’s definitely the case. These are U.S. companies. We’re a family-owned company, I think there’s lots of people in the supply chain that are family owned, and, you know, to hear that we’re going to be punished or tariffed is a little confusing.

Ryssdal: What happens to your business if the BMWs they make in South Carolina all of a sudden become 25 percent more expensive overnight?

Brebrick: I guess that cost will have to be passed along or it’ll have to be managed. Someone has to pay it. Either they get it from the end user or they’re going to have to cut costs, and that can sometimes mean headcount reductions.

Ryssdal: To a slightly bigger question here Mr. Brebrick, we originally had you on the program talking about the exemption requests that you had filed for some of the imported steel that you use to make the parts that go into windshield wipers and all of this. What is the status of your exemption request with the Department of Commerce? Do you know of the top of your head?

Brebrick: I do. We’re waiting. That’s our status. As far as where the consideration is or where the ruling is, no, we don’t have any word on that yet. It is a little bit tense because we have this June 1 deadline — that postponement of the tariff for [European Union] companies.

Brebrick: We’re hoping for some positive news, but we’re not really sure how the process is going.