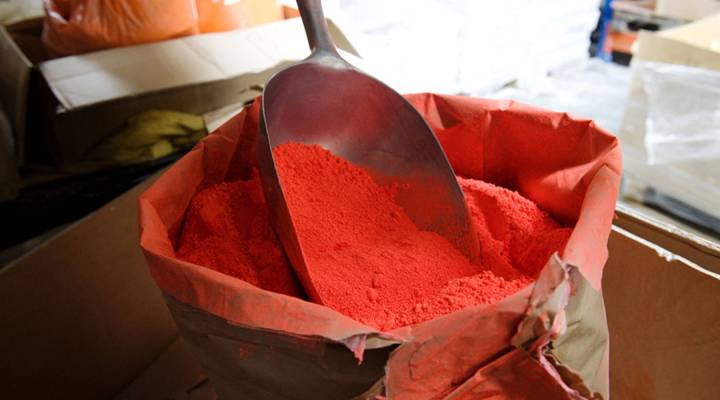 A modern computer can display 16.8 million colors, but not every one of them could be applied to materials. One important factor needed in the process is called pigment. And today, many of them are either toxic or not durable. Marketplace host Kai Ryssdal talked to Zach Schonbrun, a freelance journalist, about his piece on Bloomberg’s Businessweek that looks at the pigment market and why the world needs a new red pigment. The following is an edited transcript of their conversation.

Kai Ryssdal: Tell me about the story of this piece. It’s the hunt for the next great red pigment, and you do it by telling the story of the guy who found recently, I suppose, or a number of years ago, the first good new blue in 200 years. Mas Subramanian is his name.

Zach Schonbrun: That’s Right. Mas Subramanian. He’s a chemist at Oregon State University. And in 2009, he was looking for a compound that could be used in electronics. He was mixing elements together that were fairly bland and kind of flaccid colors that were going into — they were white and gray and black. And he stuck them in an oven and out pop this beautiful, vibrant blue. It was incredibly durable. It was nontoxic. It was made from completely benign elements. It was also UV resistant. But, you know, what was interesting to Mas moving forward and other researchers was in what ways could this compound be used to create other colors and keep those same properties in perhaps a green or purple, and really the holy grail of pigments is finding a red, and that’s what he’s been searching for ever since.

Ryssdal: And how’s it going?

Schonbrun: [laughs] Well, the interesting thing about pigment research as I understand it is that these are chemists who have been studying this for a long time, and yet they stick elements together and they really still have no idea what’s going to come out of the oven. So, you know, he would say he’s getting closer, which means that he’s producing some colors that approach a red. He’s got some burnt sienna and some orangy-rusty looking things, but he’s moving toward it, he would say.

Ryssdal: Give me a sense of the economic upside here. I mean, if he can find this red, I imagine, you know, Ferrari dealers and, you know, everybody’s going to want a slice of it.

Schonbrun: Right. So coming up with a durable, stable, nontoxic red that is also a beautiful red, that’s something that’s desirable to consumers, would be a huge windfall for whoever is able to come up with that. Just as an example, Ferrari red earns about $300 million annually for the … producers. I feel like if there was a red that was created that could surpass that and was a better alternative, I would think that would make, you could approach the billion-dollar range for sure.

Ryssdal: How big is the pigment market, do you know?

Schonbrun: It’s in the billions. I think the estimate that I saw was around $30 billion. Most of that is with titanium dioxide, which is the chemical, the elements that are used to create most of the white pigment that we see everywhere from the lines on our roads to the white powder on our doughnuts. And so titanium dioxide accounts for a huge percentage of the overall pigment market. But high-performance pigments, which are the safest, most durable and stable of the pigments today, they are increasing their market share, and they are growing continually as emerging markets want to move away from the more dangerous and toxic pigments. And if there is a pigment that is discovered in that red as we’re talking about, I think it would be quite valuable.

Ryssdal: Is this going to be Mas Subramanian’s pension plan? I mean, is he getting royalties from the blue and will he profit from the red?

Schonbrun: [laughs] Well, he has to find the red first. I think he’s hoping that if he finds the red, and yeah, he can sail off into the sunset. But I think he’s very proud of his accomplishment. And so he’s eager to keep searching for what else YInMn might lead to, whether it’s red or other colors.