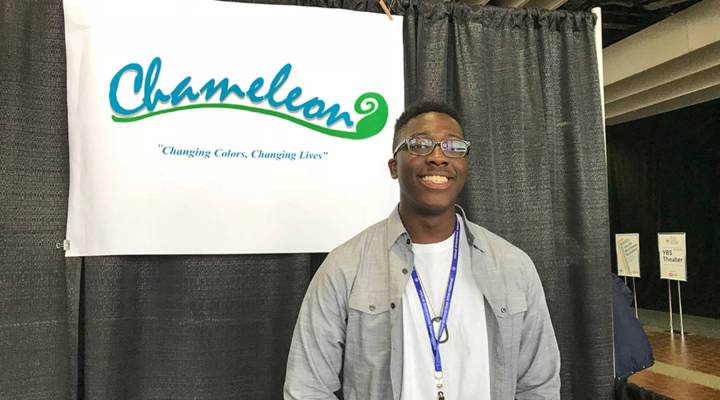 COPY
Emauri Singletary in front of the logo he designed for his Virtual Enterprise company, which sells disposable cups that change color to detect date rape drugs. Shaheen Ainpour/Marketplace

Emauri Singletary in front of the logo he designed for his Virtual Enterprise company, which sells disposable cups that change color to detect date rape drugs. Shaheen Ainpour/Marketplace
Listen Now

At a recent trade show in New York, high school student Ashley Klement walked me through the different flavors of coffee her company, TropiCoffee, sells. There are five: original, mocha, caramel, vanilla and a special seasonal flavor.

“Right now, it’s Peeps flavor, but every holiday it switches,” she said.

I can’t buy any Easter bunny-flavored coffee however, because TropiCoffee doesn’t exist. It’s a class project.

TropiCoffee is one of the 450 student-run “companies” that are part of Virtual Enterprise, a nonprofit business education program where classes of high school students are tasked with starting a pretend company and running it themselves. School’s pay around $3,000 a year to offer the class. After a few students are appointed by their teacher to fill executive roles like CEO, the rest interview for different jobs in marketing, sales or human resources.

“It’s kind of like a big game of Monopoly,” said Klement. That’s because even though I can’t buy any TropiCoffee myself, the student’s in VE can. They get paid in digital currency — think Monopoly money — that they can use to buy each other’s products, like Peeps-flavored coffee.

The program is an effort to teach students the kind of business skills that you can’t learn from a textbook. High school student Matthew Plonskeer, TropiCoffee’s CEO, said before taking VE, he was focused on doing work for himself, “whereas here, in order to operate as a successful company … you really have to work together.”

Another student, Emauri Singletary, is the vice president of human resources at Chameleon, a student “company” that sells disposable cups that change color to detect common date rape drugs. He designed the logo on Chameleon’s poster behind their booth. Why is someone in HR designing a logo rather than, say, the graphics department?

“I am the graphics department,” he said. He doesn’t mind working double duty because he’s planning to major in studio art at the College of Charleston next year. VE is giving him a chance to test drive his career.

According to VE, that’s the point. “Over 75 percent of our alumni identify that they’re still in the career that they identified in VE,” said Nick Chapman, the president of Virtual Enterprises International.

When I was in high school, I wanted to be a private detective, like Veronica Mars. Let’s just say I’m still working on it.