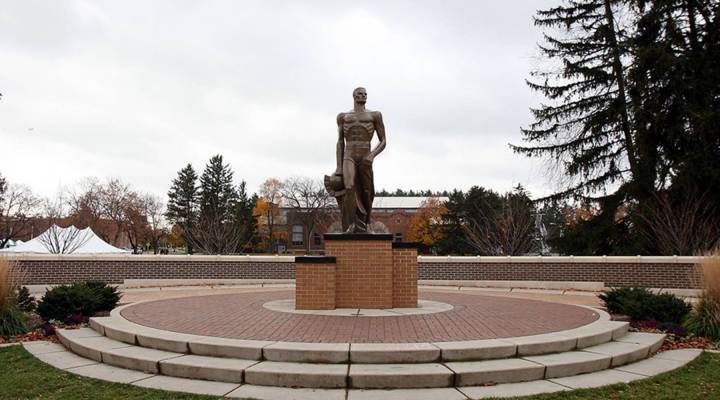 When Michigan State University announced a $500 million settlement last week with victims of convicted sports medicine doctor Larry Nassar, officials didn’t say how they would pay for it. Interim President John Engler told Michigan Radio that insurance will cover some of the cost. The university may have to borrow some money or dip into reserves.

“That’s my job now, as president, to give to the board of trustees a plan that says this is how we fund this and this is what the finances of the university look like,” Engler said on the “Stateside” program.

That plan is expected at a board meeting next month. There’s enough concern about the financial impact of the Nassar scandal that Moody’s downgraded MSU’s credit rating earlier this month.

“Nonetheless, the university does face a number of other investigations that are underway,” she said. “There is still some residual uncertainty around what else might come forward.”

Some faculty worry about potential cuts to programs in the face of declining state funding.

“My concern is that whatever negative effects occur, they may be disproportionately shared across the university,” said Stephen Esquith, dean of Michigan State’s Residential College in the Arts and Humanities.

“A lot of these schools, they have loyal alum bases and people believe in their schools, and they want to believe that, even when bad things happen, there’s some light at the end of the tunnel,” he said.

He points to Virginia Tech, which became a leader on campus safety after a mass shooting in 2007. Reclaim MSU, an alliance of students, faculty and staff, is pushing for changes in how the university addresses and prevents sexual assault. One important step, said co-founder Natalie Rogers, is giving students and faculty more of a voice in governance.

“We are in the perfect position to be a leader,” said Rogers, a rising junior at MSU. “All of this is going on in the wake of the #MeToo movement, and we can’t forget that. We can’t forget the position that we’re in.”