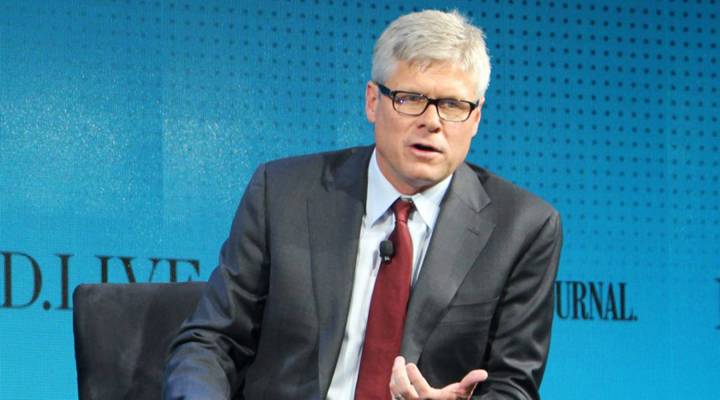 COPY
“There is a responsibility to make sure that the technologies that you create have the proper technology built in so that it's used appropriately,” Qualcomm CEO Steven Mollenkopf says. Above, he speaks at a tech conference in October. GLENN CHAPMAN/AFP/Getty Images
Corner Office

“There is a responsibility to make sure that the technologies that you create have the proper technology built in so that it's used appropriately,” Qualcomm CEO Steven Mollenkopf says. Above, he speaks at a tech conference in October. GLENN CHAPMAN/AFP/Getty Images
Listen Now

One of the American companies that keeps a close eye on any talk of a trade dispute with China is Qualcomm, the San Diego-based chip manufacturer and technology company that plays an important role in making our cellphones do what we want them to do. It sells its technology to companies all around the world, including to Chinese companies like ZTE. Steven Mollenkopf took over as CEO in 2014 after spending nearly his entire working career there, and in this interview with Marketplace host Kai Ryssdal, he doesn’t seem too worried. What follows is an edited transcript of their interview.

Steven Mollenkopf: We’re the company that invents the technology that is used to create cellular. So we are one of the few companies that creates the key things that make the cellular industry happen.

Kai Ryssdal: So, a lot of people will hear that and think, “Chips, they make chips.” What’s the big deal?

Mollenkopf: We do make chips. We also do the fundamental research that allows the ecosystem to develop. So you try to figure out: Who does all the work that allows you to make a phone call anywhere in the world to anywhere else in the world? And Qualcomm has been a big piece of that for 30 years.

Ryssdal: We’re talking a lot about China because obviously it’s in the news. Do we worry too much about China, do you think? What are we not paying attention to because we’re paying so much attention to the Chinese?

Mollenkopf: It’s like any other thing, I think it’s quite diverse.

Ryssdal: Your threat matrix, as it were, right?

Mollenkopf: Yeah, if you looked at what we worry about in China, it’s very different from what a lot of other people would worry about or voice or even what people tend to say is behind, let’s say, the trade discussions. We have a different set of requirements. When we talk about what could be improved in the relationship, then aluminum, or, you know, another type of company that doesn’t have market access. We have market access, we have good IP protection there. We have discussions about the price. But otherwise, we have a very good and solid business there. But, of course, there’s always things to be worked on.

Ryssdal: To 5G. There will be people listening to this program who’ve heard 5G and are still going to be like, “So what?”

Mollenkopf: Well, I would say, it’s coming to them very soon.

Ryssdal: What’s it going to do for me?

Mollenkopf: In the near term, it’s going to allow you to get more video more places and at better cost points. This is the early phases of 5G. It will also enable a company like Verizon to compete with a cable company, but ultimately you’re going to see a lot of things like self-driving cars, just a tremendous amount of IoT and secure services.

Mollenkopf: Yeah, Internet of Things, but when people talk about the Internet of Things, it almost doesn’t mean anything because it’s so wide. You know, if you look at it from a company, a Qualcomm point of view, the track record of creating technologies that open up new business opportunities is pretty high.

Ryssdal: Does any of that give you pause, the strength and the power and the possibilities of the technology we’re building today?

Mollenkopf: First of all, it’s exciting to work on.

Mollenkopf: There is a responsibility to make sure that the technologies that you create have the proper technology built in so that it’s used appropriately. Then the question is, how do we make sure public policy is ready for these technologies? Meaning that we try to encourage lawmakers, we educate lawmakers, we make sure that they know these are the type of things that people will be able to do with the technology, so get ready for it.

Ryssdal: Do you think lawmakers understand?

Mollenkopf: They do, you know.

Ryssdal: Did you see them with Zuckerberg and the Facebook questions? Come on, man.

Mollenkopf: Well I would say this: When you talk to lawmakers about the ramifications of technologies a company like we make, they pretty instantly get it. And then then the question is, how you do legislation? And that’s not a technical problem, unfortunately.

Ryssdal: So how are we doing in our technology policy?

Mollenkopf: I think we’re doing pretty well. And as much as people talk about it, the environment is incredibly ripe to continue to innovate. Now, I answer that from the perspective of a company that is building fundamental technologies that are being used, really, by other companies. We don’t have all of the data privacy and some of the issues that are in the news today, so we avoid that just by where we are in the ecosystem, but from our perspective, I mean, the number of new technologies and the relevancy of the things you’re working on has never been higher.