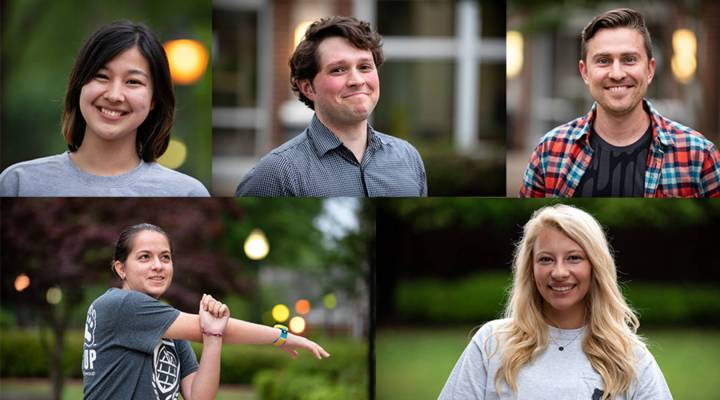 COPY
Graduates from 2008 and 2018 met at the University of Central Arkansas for a roundtable discussion. Bryan Clifton/Marketplace
Divided Decade

Graduates from 2008 and 2018 met at the University of Central Arkansas for a roundtable discussion. Bryan Clifton/Marketplace
Listen Now

Ten years after they graduated during the Great Recession from the University of Central Arkansas, several alumni returned to campus for a roundtable with graduates from the class of 2018. The returnees, now in their 30s, talked about making far less in their first jobs than they’d anticipated. Some moved around a lot early on in their careers – which studies suggest is a better way to boost wages – whereas others stayed put and chose to be more risk-averse during the economic downturn. The most common advice heard at the roundtable: take what you can get in your first job.

Read more about the new graduates and returning alumni below.

Speaking about the year he graduated, Kroger said, “I was ignorant to the fact that there was a financial crisis going on … I wasn’t going into a trade, construction, [or] finance so to some degree I was like ‘what did that have to do with me?’ Especially at that age I didn’t realize the trickle down effect that had on virtually all markets.”

Chris Fettes graduated college in 2008 and found a job working as an HR assistant shortly after. “I was aware that things were happening in the economy. I wasn’t seeing it firsthand, though.”

A year out of college Fettes was getting married and when he did eventually see the impact it was in a positive way: In the form of a housing tax credit. “As part of the Recovery Act that happened in 2009, first-time homebuyers could get a tax credit if they meet certain criteria. The [program] incentivized us to go ahead and buy a house. I don’t know if we would have bought a house at the time [without it].”

These days, Fettes says he worries about the potential of another financial crisis. “A lot of people didn’t see it coming [or] know what the far-reaching implications would be. So if there’s something that causes a crisis in the next couple years I don’t think any of us necessarily know what that’s going to be. I don’t think I’m necessarily prepared for that [but] I think having a healthy perspective and not panicking is a good way to prepare, being able to take the long view is important.”

Angelina Marconi was only in middle school when the financial crisis happened.

Angelina Marconi was only in middle school when the financial crisis happened.

While she wasn’t aware of the details of the crisis, she does remember the effect it had on her neighborhood. “I moved to a neighborhood that had a new developing part … so there were frames of houses going up constantly and then all of a sudden there were a lot of houses that stopped being constructed on.”

Ten years later, Marconi is graduating college and while the crisis didn’t directly hit her family she still sees its lasting impact. “I’m a firm believer of not letting money control how you live your life, but definitely be aware of it, because if you don’t save up and if you’re not aware of  the economy you’re not going to be prepared and be financially adjustable. That’s the lasting impact [of the crisis] is being money conscious and saving up, and knowing what you can spend and afford and knowing [when you need to be] in your limits.”

Morgan Sweere was in middle school during the financial crisis.

Morgan Sweere was in middle school during the financial crisis.

“I think my family was impacted almost positively by [the crisis].” Throughout her childhood, Sweere’s parents held down multiple jobs. But in 2008, her dad accepted a higher-level position at General Motors and was able to leave his previous auto shop before it went under. A few years later he managed to keep his job as GM struggled during the recession. During that time, Sweere says, “I think I felt the stress of finances on my parents relax a little bit because my dad was able to make more money.”

When Sweere thinks about her financial life she says the crisis and her parents’ habits had a lasting impact on her. “They’ve always been very financially cautious. [They] instilled into my head that I need an eight-month emergency fund.” Although her family stayed afloat during the crisis she still worries about future ones. “I think I’m worried about another financial crisis just because I was at the age where everything was amplified. I was seeing all these big headlines and so I started to really take that in. Now, I’m worried about it [and] want to be extra prepared and do anything I can to make sure my family will be okay.”

Audrey Bauman was 11 when the financial crisis happened.

Audrey Bauman was 11 when the financial crisis happened.

While she had friends whose families did get hit during that time, she says she was lucky that her family wasn’t really affected. “When I chose my college degree I did it more based on what I like [rather than] on outside factors, like the economy.”

Her family also encouraged her to pursue what she liked so she graduated with a degree in creative writing and linguistics. She says economic stability and uncertainty does weigh on her. “I did have apprehensions because … my main degree is creative writing and it’s got a stereotype of ‘creative writing majors don’t get jobs.’ So, I can’t lie, I still think about that and it makes me anxious.”

Bauman hopes her degrees are flexible enough so she can explore various career paths. When she thinks about her economic future and safeguarding herself against another recession she hopes she’s prepared. Bauman says, “my main goal to prepare for a financial crisis is to become more financially smart. That’s not something I’ve had to think about as much since I got a scholarship to go to college so I haven’t had to work while at school. I think after I graduate I’ll have to build those skills: Paying rent, paying taxes, learning to save.”