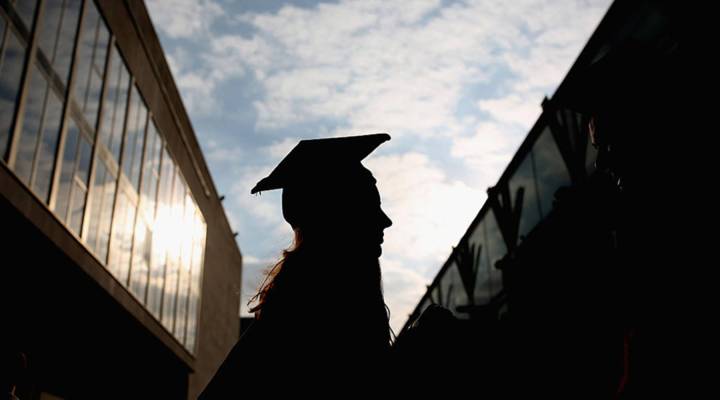 When Luis Calderon graduated from the University of Central Arkansas back in 2008, he had the immigrant dreams of his entire family upon his shoulders. But then the Great Recession hit, and like many in his year, Calderon paid the high price for unlucky timing.

Calderon majored in economics with an emphasis on international trade, and during his senior year he aspired to begin his career at a multinational corporation.

“The goal once I graduated was to work for a multinational company that had assets in Latin American countries, and my role within the company would be to do economic analysis of the region,” Calderon said. “So I had it all planned out. But reality was totally different, of course.”

Luis Calderon at North Little Rock Catholic Academy, formerly St. Mary’s School, where he attended after his family moved from Guatemala. His father worked there as a janitor.

Calderon’s story began at St. Mary’s School, a modest private Catholic school in North Little Rock now known as North Little Rock Catholic Academy. He enrolled there at the age of 13, when his family — his father, mother and younger sister — moved from Guatemala. His father gave up a high-end government job back home, with fancy lunches and a chauffeur, to work as the school janitor.

“I was embarrassed at times,” Calderon said. “Some of the kids were like, ‘Whose dad is that?’ ‘That’s my dad.’ ‘He’s cleaning the bathroom?’ ‘Yeah, we can’t go in there because my dad is in there.’ I wouldn’t even want to go to the bathroom because he was in there cleaning.”

Eventually the family became naturalized citizens, and Calderon enrolled at the University of Central Arkansas, a public university 30 miles away.

Calderon sent his resume around the world. Then, in the spring of 2008, investment bank Bear Stearns collapsed on Wall Street, and the financial system tanked. By graduation in May, the economy was losing 229,000 jobs a month, and all Calderon could find was a local, part-time gig as a bank teller. It was the same job he’d been doing during college.

When college students graduate into a recession, several studies suggest the damage can be lasting. Young recession graduates tend to make less than nonrecession graduates, and their salaries don’t catch up for 10 or 20 years. How long the gap lasts depends on the study and the duration of the recession.

Some young professionals never catch up.

“We certainly find a significant fraction of graduates that are permanently affected,” said Philip Oreopoulos, an economist at the University of Toronto who has published on this topic. “And even for those who are not, they do come off quite worse off over the lifetime.”

As far as earnings over a lifetime, studies find recession graduates can make $60,000 to $100,000 less than their luckier peers.

Oreopoulos found in his study that young recession graduates tend to start out in low-paying first jobs at smaller firms.

“Not only did they end up with lower wages,” he said, “but they ended up in firms that tended to be smaller and tended to pay less.”

Arkansas is one of the poorest states, where the median household income was $44,334, based on 2016 census data. During the Great Recession, its job market bounced back more slowly than the rest of the country.

Still, Luis Calderon tried to move up at the bank where he worked. He applied to be a loan officer and approached a bank vice president.

“He said, ‘Well, Luis, the people in our area are used to seeing a certain kind of individual. And I don’t know that you fit that mold,’” Calderon said. Quickly, he realized what the vice president meant. “He said, ‘Maybe in a couple years when the Hispanic market is a little bigger, I can help you.’ So that’s when it clicked. I said ‘Aha!’”

Three weeks later, Calderon quit and got a job in the customer service department of the Little Rock office of Blue Cross Blue Shield. His paycheck went down. Still, Calderon has stayed with the health insurance company for nine years. He’s married, has a young daughter and owns a home.

Luis Calderon with his wife, Claudia, and daughter, Natalia. “Not being happy about where I’m at, not being happy to enjoy the blessings I have would be a disservice to the sacrifices that both of our parents have made,” he said.

To make all this happen, Calderon borrowed over the years, paying off his credit cards by raiding his retirement plan. For him, that’s the price of graduating into a recession that in the end caused the economy to shed 8.7 million jobs. Still, he maintains a certain perspective on this reality.

“I’m way, way better than the way my parents ever were,” Calderon said. “And not being happy about where I’m at, not being happy to enjoy the blessings I have would be a disservice to the sacrifices that both of our parents have made.”

Today, he’s a supervisor at work and has received a number of raises over the years. But Calderon remains far short of his ideal starting salary from a decade ago.