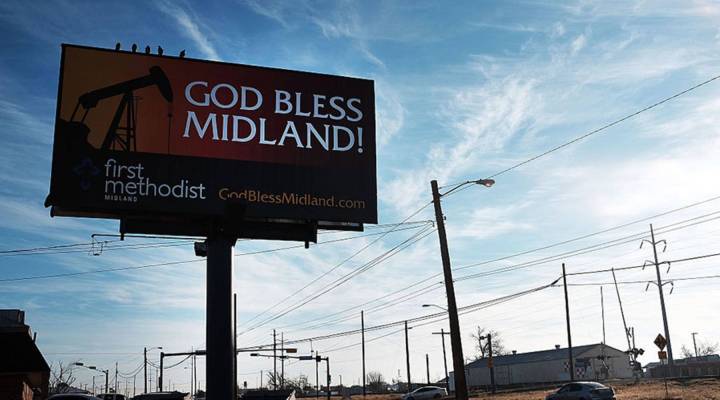 COPY
A billboard promotes the oil industry along a road in Midland on February 6, 2015 in Midland, Texas.  Spencer Platt/Getty Images

A billboard promotes the oil industry along a road in Midland on February 6, 2015 in Midland, Texas.  Spencer Platt/Getty Images
Listen Now

The median household income in Texas oil country – the Permian Basin – is consistently among the highest in the country at almost $70,000. But not everyone is making that kind of money. Ask people in Midland about the underserved and homeless population, they’ll almost immediately talk about the different boards they’re on and the work their church does to help the less fortunate. And almost everyone agrees they don’t want the state taking their money to help do something they’re perfectly capable of and willing to do. But is it enough?

Midland, Texas has about 150,000 people but this oil hub has drawn in thousands more recently as petroleum prices have risen. The local economy is booming and most folks here say if you want a job in Midland, you can probably find one. But not everyone is awash in oil money.  At the Salvation Army’s homeless shelter just south of downtown, 56-year-old Barry Lee who lives on social security disability payments was hanging around outside just after eating lunch. He’s actually pretty upbeat about how Midland helps people who are struggling.

Kat Hernandez, the lead social worker at the Midland Salvation Army, said nonprofit agencies in Midland have their work cut out for them. The Salvation Army is a nonprofit that receives government funding, but also relies on capital campaigns to supplement its coffers. Hernandez said the citizens of Midland have not formalized anything to help the homeless here.

“Midland has only one homeless shelter, which is us,” she told me.

The Salvation Army has some 20 beds. At last count, there were 264 homeless people in Midland. But whether you’re talking homelessness or other kinds of need, many people here take pride in caring for others. T.C. Byrom, who grew up in Midland, is an active volunteer.

“Philanthropy is part of how you’re raised here,” Byrom said while standing in his custom furniture shop. “Whether it’s through your church or through whatever youth group or whatever, it’s just ingrained that you’re going to give back.”

After working in the oil and gas industry in Midland for years, TC Byrom opened a custom furniture business. He serves on non-profit boards and volunteers at local schools mentoring at-risk youth.

Byrom and his wife are on a couple of nonprofit boards and he mentors at-risk youth in local schools.  He’s happy to volunteer, but he doesn’t think he should be forced to pay for extensive social services through taxes.

“I don’t want to be overly taxed, we pay a ton of taxes: property taxes, ad valorem taxes, per-barrel taxes,” he explained. “We’re taxed to death.”

Half of Midland County residents voted for President Donald Trump. It’s a conservative town with libertarian leanings, and you can hear that when talking with its elected officials. Just ask Midland County Judge Mike Bradford what’s wrong with the way things get done around here.

“It’s the insatiable conversation that goes with centralized government in one place, Austin, Texas or Washington D.C.: I know better than you. I don’t live where you do, but I know better,” Bradford said.

Bradford wants more of the county’s tax dollars to remain in the county. He said the government should stay out of the way if Midlanders can take care of the less fortunate themselves.

Midland County Judge Mike Bradford wants more of the county’s tax dollars to remain in Midland. He thinks the government should stay out of the way, if Midlanders can take care of the less fortunate themselves.

But it’s not that simple, said Jeff Bradach, co-founder of the Bridgespan Group, a philanthropy consultancy.

“The frame can be, we need more philanthropy so government can exit and that will never be the case,” Bradach explained. He said no matter how rich or successful a community is (and Midland is doing well with oil prices where they are right now), it’s impossible for the private sector to fill the gap.

“The scale required to meet those kinds of needs far surpasses what is available from private philanthropy,” Bradach said.

But he argued it doesn’t have to be one or the other. In fact, private philanthropy often clues government into better ways of doing things.

“To the extent we can keep it from being a horse race between the two, who is winning, which is right, and figure out how do they compliment each other, that’s a good thing,” he said.

To some extent, that could be a possibility in the near term, said Amir Pasic, dean of the Lilly Family School of Philanthropy at Indiana University.

That agnosticism doesn’t feel like it’s hit Midland quite yet. But with the oil boom bringing more and more people into the west Texas town, some of the old orthodoxies could well be challenged.