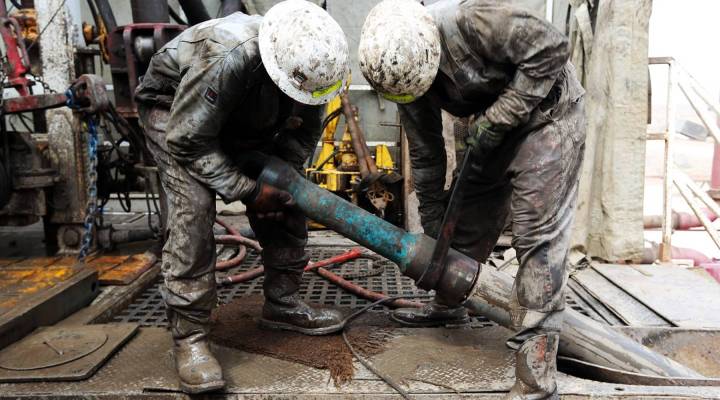 There’s a lot of talk about robots and automation taking over industries and putting people out of work. And that distinct possibility isn’t lost on folks working in the oil fields of West Texas, where technology advances are the key to maximizing efficiency and weathering the storm when oil prices inevitably fall.

In a mobile trailer next to a 100-foot oil rig in the heart of the Permian Basin oil patch, between Midland and Odessa, Texas, Pablo Talamantez pointed to a bright, blinking computer screen on his desk.

“It gives you everything you need to know,” Talamantez explained.

His computer gives him real-time updates on the rig’s penetration rate, pump speed and fluid rate. It took Talamantez’s boss, Tommy Taylor, some time to trust the new technology. He was used to a regular schedule of paper printouts, analog data that he and his crew could check and pass around. The new system has sensors connected to the oil rig and everyone can see it on their screens.

Tommy Taylor watches as his team at Fasken Oil and Ranch drills a vertical oil well in the Permian Basin, in West Texas.

Taylor said — pointing to Talamantez’s computer — that engineers can now pull up information on their phones or laptops. “You can pull this up wherever you’re at.”

“We will have to have these kind of things to get the workers to come out,” Taylor said, referring to the new tech systems. “You want to work on a rig that, you know, you don’t get your hands dirty and you run a lever? Or you want to get out here and use the tongs? Some of the guys, they don’t want to do that.”

Pablo Talamantez is a drilling contractor who has been working at Fasken Oil and Ranch for 14 years.

Eric van Oort, a professor at the University of Texas at Austin’s petroleum engineering department, is at the forefront of the changing technology in the oil field. His classroom includes a room that feels something like an Imax theater. Three large chairs with joysticks face a huge video screen displaying the virtual oil rig. Students can simulate everything about drilling an actual oil well. Van Oort said the skills he’s teaching his students are applicable beyond the oil patch.

For the industry, that multidisciplinary skill set could end up being a problem.

“One of my better students, for instance, working data analytics, who would be a tremendous resource to the oil and gas industry, is now being headhunted by Tesla,” van Oort said.

The fear that robots and automation will take over from humans in the oil industry might be well founded. The Labor Department says some 50,000 fewer people now work in oil and gas extraction than at the height of the last boom three years ago.

“The role of humans will change,” van Oort said. “You’ll see more humans focusing on maintenance of the equipment or the logistics associated with it. And then a lot of it, indeed, in analyzing the data.”

Van Oort says he’s incorporating data engineering into his curriculum. And his students leave school knowing much more than just how to drill an oil well.

In the near future, instead of simply calling them roughnecks in the oil patch, he said,  more oil and gas jobs will carry titles like data analyst and systems manager.