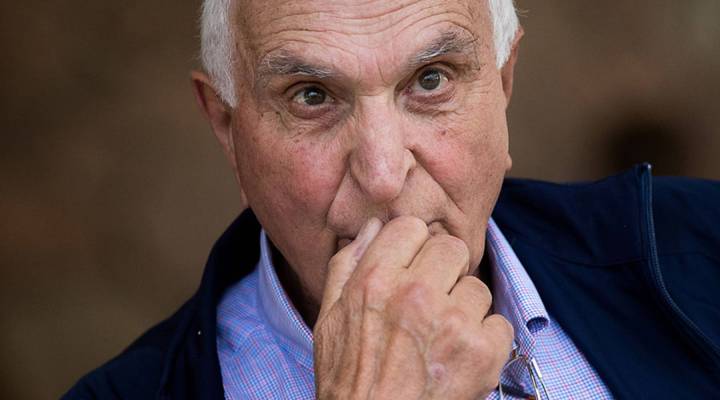 Ken Langone is an investment banker and entrepreneur who’s worked on many deals in his lifetime, but is perhaps best known for co-founding The Home Depot. Most recently, he’s offered a strong defense of capitalism in his new book, “I Love Capitalism! An American Story.” He talked to Kai Ryssdal about why he wrote this book now and how he thinks capitalism should work. The following is an edited transcript of their conversation.

Kai Ryssdal: So this is about as full-throated a defense of capitalism as you are ever going to read. And I guess my first question is, why do you think capitalism needs defending right now?

Ken Langone: I don’t think it needs defending. I think it needs understanding. In the 2016 campaign, as I watched Bernie Sanders campaign, it dawned on me the massive number of young people that were showing up for him. And the thing that frightened me was, these kids haven’t even started yet and they’ve given up! Capitalism works. Admittedly there were winners and losers, but it works. Certainly, I think if you look at the history of our great nation, it’s certainly made a massive contribution to where we are today vis-a-vis the the rest of the world for sure.

Ryssdal: So people who listen to this program regularly will know that I read the acknowledgements section of a book before I read anything else. And the thing about this book that you’ve written, “I Love Capitalism!” is that the acknowledgements come in the beginning. There are, I think, five pages where you just list people who have helped you out and assisted you through your career, and I think the thing that you didn’t say when you were talking about the benefits of capitalism is that you need help along the way.

Langone: A whole lot. Kai, I am anything but a self-made man. You need to have a team of people, and you need to have them feel they are with you, not for you. And that list — I deliberately wanted that list, and I pray to God I haven’t left anybody off the list. If I did, it’s a mistake. But every one of those people on that list in one way or other contributed to my journey through life.

Ryssdal: So let me try the spirit of that question in a different way and let me ask it this way: You talk in the first chapter or two of this book about your freshman year of college at Bucknell, which in itself was sort of a miracle that had happened because you really weren’t thinking about college and all of this. But you get to college you’re having a good old time, probably too good a time, as you say —

Ryssdal: But this professor sits you down as you’re about to fail out and says, “I am going to help you. I am going to go around to all your professors and tell them basically that you’re a diamond in the rough and to give you a chance.” Where would you be if that guy hadn’t helped you out that way?

Langone: Well, I wouldn’t be where I am today. The fellow’s name was Russ Headley. He was professor of economics at Bucknell. Professor Headley is one name. But you pick a name that certainly was pivotal at that moment in time, and all the names I’ve listed in the book were pivotal to my career or my path at the point in time when they were in my life or were involved with me in some activity, whether it was a business or a charitable cause or whatever it was.

Ryssdal: So what do you do, Mr. Langone, if you’re one of the people in this economy —

Ryssdal: I will do that, Ken, I apologize for my formality. It’s reflex. What do you do if you’re somebody in this economy, and there are many of them, who don’t have people to help them out?

Langone: I feel very sorry for them. What do I do? I think there couldn’t be a more lonely existence to not have at least one person in your life, at any one point in time in your life, that you couldn’t pick up the phone or you couldn’t go see and say, “Hey, what do you think?” Or “I need your help.” Or “Can you do this for me?” Or “Can you do me this favor?” So that description, you tell me about that person, that’s a very sad — I will tell you this though, and I don’t mean this in a lecturing way: My father had a wonderful expression. He said if you want to have a friend, you got to be a friend. So maybe that fellow wants to take a step back and ask himself the question, what has he done to nurture those kinds of friendships and relationships?

Ryssdal: I do want to say here, just to give the other side of the coin its due, that you have been extremely active in philanthropy, that you have taken the money you made at The Home Depot on Wall Street and many other places and you’ve given back to the community. Not all though in your position do that, and I wonder what your thoughts are on the high and rising level of inequality in this economy.

Langone: OK. I think anybody whose possessions are theirs, are theirs to do with what they want, for whatever reason. First, I would say to you I would rather be remembered as a philanthropist who gave up his time and his talent. All the money I’ve given back, I’ve made it all back and more. And I believe a driving force behind any kind of success is a faith and belief in yourself. So anything you can do that nurtures self-confidence or self-respect is to the good.

Ryssdal: Let me circle back to where we started, which is the defense of capitalism that this book is, how you came to write it, which is watching Bernie Sanders promise many, many things without explanation of how they were going to be paid for during the 2016 campaign. But then also the ultimate result of the 2016 election, which is Donald Trump as president of the United States, a man whose candidacy you supported, whose policies you support. Do you think the average American is going to be better off under Mr. Trump’s economic policies?

Langone: Well, what objective measure do we want to use? Look at the unemployment rate in America today. I can tell you right now virtually every businessman I know says the environment in Washington is more constructive to business than it’s been in a long, long time. Look, we have a shortage of qualified labor in America today, we have a shortage. Ten years ago people were worried about what they were going to do to feed their families. And the other part of that equation, Kai, is public education. We need to get these kids prepared to take advantage of these jobs. I think if we fix that problem, we’ll go a long way toward solving an even bigger problem, which is income inequality. We can’t afford to allow our income inequality grow. It’s got to contract, and we’ve got to bring more people to the party. That’s an obligation of capitalism. That’s a responsibility we capitalists all have, and we’ve got to do better.

Click here to read an excerpt from Langone’s book, “I Love Capitalism! An American Story.”