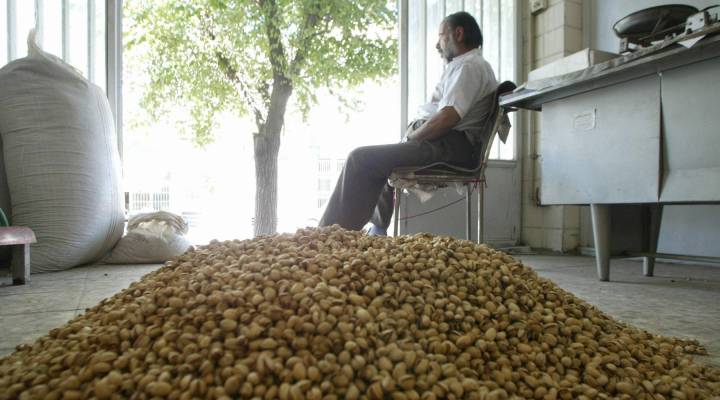 COPY
Iranian Mohammad Reza Saberi sits by a mound of pistachios in his shop in Rafsanjan, Iran.  BEHROUZ MEHRI/AFP/Getty Images

If you ate pistachio nuts in the 1970s – chances are they came from Iran and they were red. Growers hadn’t yet perfected the smooth white shells we see today and didn’t think Americans would eat nuts with dark marks, so they dyed them red. And we ate them up, consuming around 20 million pounds of Iranian pistachios a year.

Then the Iranian hostage crisis happened. More than 50 Americans were held in captivity inside the U.S. embassy in Tehran for 444 days. The U.S. and its allies slapped sanctions on Iran – and put an embargo on its imports. No rugs, oil and pistachios. At the same time, new irrigation techniques, among other things, gave the pistachio industry a chance to take root, according to Louise Ferguson, a pomologist and professor at UC Davis.

“We had a tree that was suitable, we had available water and then we had markets,” she said.

But pistachios take time — seven years to get nuts off the tree. That was enough time for the U.S. to start trading with Iran again, and Iranian nuts to start flooding U.S. markets.

“Iran was sending a tremendous amount of their product here to the United States,” said Richard Matoian with American Pistachio Growers. Those nuts were cheaper than ours. “And there are some very strict rules against dumping product into another country.”

So, the U.S. industry successfully lobbied for a 300 percent tariff (and duty) on inshell Iranian pistachios – essentially stopping their flow into the U.S. Shelled nuts were not covered by the tariff. Emily Blanchard, an economist at Dartmouth says tariffs did what they were supposed to do.

“Anytime you smack a tariff on a foreign export you’re going to give the domestic firms a new opportunity where they can fill that void without foreign competition,” she said.

These days, the U.S. and Iran dominate the global market. China bought $531 million worth of our nuts in 2016. Earlier this year, President Donald Trump enacted steel and aluminum tariffs mostly to keep cheap Chinese steel out of the country. Then China placed tariffs on goods they get from us – and hiked existing tariffs on our pistachios — from 5 percent to 15 percent.

Kim Elliott, with the Center for Global Development say the U.S. will have to find other markets. “There will likely be at least some downward pressure on prices in order to do that. So there will be certainly some cost to the U.S. pistachio industry,” she said.

For Iranian nut growers, this may mean more of a market for them in China. Farhad Agah, a pistachio grower in Kerman, Iran is from a long line of farmers.

“Because of this new trade war between China and the United States the balance has been shifted in favor of Iranian pistachios being exported to China,” Agah said.

Iran already exports over a billion dollars of pistachios a year – most of them to China.

Even after President Trump’s decision to pull the U.S. out of the Iran Nuclear deal, Agah says he isn’t completely worried – it won’t have a direct effect on the Iranian pistachio industry but, “it will have indirect effect because of some possible sanctions on the banking and on the shipping lines and other what not which is not very clear yet.”

As for American farmers, the tariffs and the fallout from the Nuclear deal may leave us with the opposite of what we had in 1979 – too many domestic pistachios with many more acres just now coming to fruition.