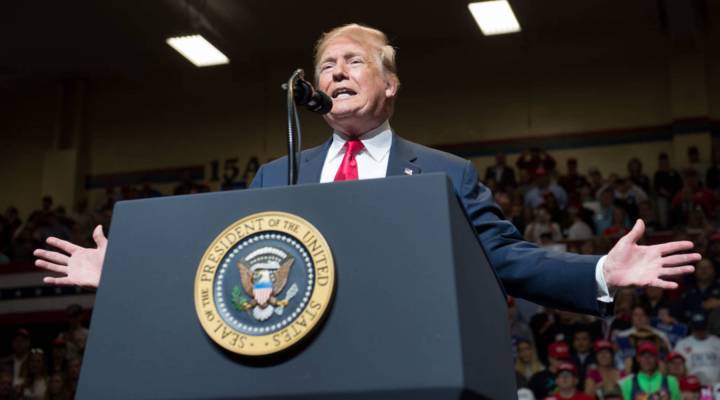 In front of a crowd of roaring supporters in Indiana on Thursday night, President Donald Trump touched on a variety of issues, like his recent decision to pull out of the Iran nuclear deal, U.S. border security, and the GOP’s sweeping tax overhaul.

Trump, along with Vice President Mike Pence, used the rally as an opportunity to encourage voters to head to the polls for this November’s midterm elections to protect the GOP’s majority in Congress.

Trump lobbed attacks against Indiana Democratic Sen. Joe Donnelly for several of his political stances, including his opposition to immigration vetting, the GOP’s health care bill, and the 2017 GOP tax bill. Meanwhile, he spent a significant amount of time during his speech praising Mike Braun, the Republican candidate whom Donnelly will be facing off against this November.

On the heels of Trump’s visit to Indiana, we took this opportunity to look at whether tax cuts will help families in this key 2018 Senate battleground state.

What we know so far about the GOP tax cuts

Walmart recently announced it would give cash bonuses to more than 890,000 U.S. associates, which they’re crediting to the company’s fourth quarter performance and the GOP tax cuts. In Indiana, that translated to a combined $13.9 million  in bonuses for employees.

Nicole Kaeding, an economist with the Tax Foundation, said the most immediate benefit of the tax bill will be Hoosiers’ individual tax savings.

Meanwhile, Andrew Bradley — a senior policy analyst for the Indiana Institute for Working Families — said we should be cautious about how we interpret these headlines about employee bonuses.

“What we’ve heard so far are individual anecdotes of what individual companies have chosen to do,” Bradley said. “But the plural of anecdote isn’t data.”

As for the potential long-term consequences, the richest Indiana taxpayers will receive the largest average tax cuts in 2027 (with an average cut of $4,840), while taxes would go up slightly for the poorest 20 percent (with an average increase of $160), according to an analysis from the Institute on Taxation and Economic Policy.

“I think as Americans learn more that these tax cuts aren’t going to deliver the almost magical promises that were given, they’re going to see that [the cuts have] opened the doors to cuts on things like housing assistance and nutrition assistance and workforce development programs,” Bradley said.

Trump used those cuts as a way to argue in favor of the GOP’s 2017 federal tax bill.

“Indiana is a tremendous example of the prosperity that is unleashed when we cut taxes and set free the dreams of our citizens,” Trump said during a speech in September. “This state has claimed a powerful competitive edge built on low taxes and less regulation.”

The Tax Foundation’s Nicole Kaeding said that the Indiana economy has changed a great deal in the past decade, and pointed out that areas like Indianapolis are becoming rising tech hubs. She noted that Indiana’s lowered corporate tax rate may be giving companies more of an incentive to come to the state.

But if tax cuts were that beneficial to the average Hoosier family, you might expect wage growth to increase, poverty to go down, and disposable income to go up compared to other states, Bradley said. However, low-income and working families in Indiana are lagging behind, or have stayed the same, on several key metrics.

Average income growth in the state isn’t as strong as the national average. Indiana’s rank of per capita disposable income (or income available after taxes) was No. 35 in 2017, the same ranking it was in 2013, according to the Bureau of Economic Analysis. And Indiana’s poverty rankings also slipped from the 22nd highest in 2013 to the 21st highest in 2016 compared to other states, based on data from the Census Bureau’s American Community Survey.

“Governor Pence’s tax cuts in Indiana and Trump’s cuts are out of the same playbook,” said Carl Davis, the research director for the Institute on Taxation and Economic Policy. “The effect is, again, overwhelmingly for people at the high end.”