Correction (May 10, 5:15 pm PST): A previous version of this story inaccurately stated that Vimeo is exiting the streaming business. It is not

If you want to watch video online your options are basically endless. So trying to compete for viewers and advertisers against big players like YouTube, Netflix or Hulu may not be the best way to go. That’s the thinking behind changes at Vimeo. The online video pioneer has been around since 2004, and it’s been kind of a cult favorite for indie filmmakers to share their work. But the company is now pivoting to become less a place to watch video, to more of a provider of a set of tools for making video. The company’s new CEO, Anjali Sud, is the person behind the pivot. She speaks with Marketplace Tech host Molly Wood about the change in focus. The following is an edited transcript of their conversation.

Anjali Sud: We’re really transitioning Vimeo from being a content company to a technology company. From being a destination for consumers to watch videos to really being a software as a service, or SaaS, platform that provides creators with the tools and technology to create, distribute and monetize their content. And we really think that this fulfills a need in the market where nobody else is focusing on the storytellers. Most of the other platforms are much more focused on eyeballs and audience because they’re ad supported.

Molly Wood: Previously you were trying to compete against a YouTube or a Netflix, which sounds daunting, obviously. Does that put you in the position of now feeding them?

Sud: Absolutely. You know, I say YouTube and Netflix, they’re no longer competitors, they are partners. And the position we can take because we’re not ad supported is to say previously creators felt like they had to choose. Where do I put my videos? On Vimeo or YouTube? And now we say they shouldn’t have to choose, and, in fact, we are going to help them get distribution everywhere.

Wood: So that, of course, then puts you in a whole other competitive class, and that class includes Adobe and even Apple. How does that competitive landscape look compared to YouTube?

Sud: So it’s certainly competitive, but at the same time, I think what no other platform really is doing is providing a workflow solution end to end. So Adobe really focuses on the editing side, but really there is no other player in the market that’s thinking about from the second you have an idea for a video, to how you get it made, to how you put it out into the world and then get that feedback loop to be able to make more videos. And what we hope is that we’ll be able to use technology to lower the barriers for quality storytelling because there’s so much friction and cost right now. The average creator has to use three or four different software providers. They have to pay often tens of thousands, sometimes hundreds of thousands, of dollars to get all the capabilities that we hope to be able to provide in the very near future.

Wood: It’s also a big shift. I mean you must have had independent filmmakers, even people internally, who said, “Nobody’s going to come to Vimeo to watch videos anymore? Why am I here? Where’s all my work going to go?” How painful is that transition?

Sud: When I stepped in as CEO, there was certainly a lot of change. And that can be hard, but at the same time the feedback that I’ve gotten from the team, the communities, I think a lot of people really appreciate the focus. It’s important for companies to be super clear on what they stand for and who they serve. And when you try and serve everybody, you end up serving no one well. And so I think that clarity and focus has actually been motivating for the teams, and it’s important to note we will always do what’s right for creators. If that means that we can give them an audience on Vimeo, we’ll of course try and do that, but it really just means that every decision we make is through the lens of the creator experience. And so if what they really need is an independent or agnostic home where their videos can start and go out into the world, then that’s what we’re going to provide. As long as we stay committed, which we will, on what’s best for creators, I think there’s many different ways that we can continue to evolve our offering and our business. 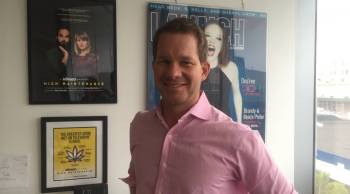