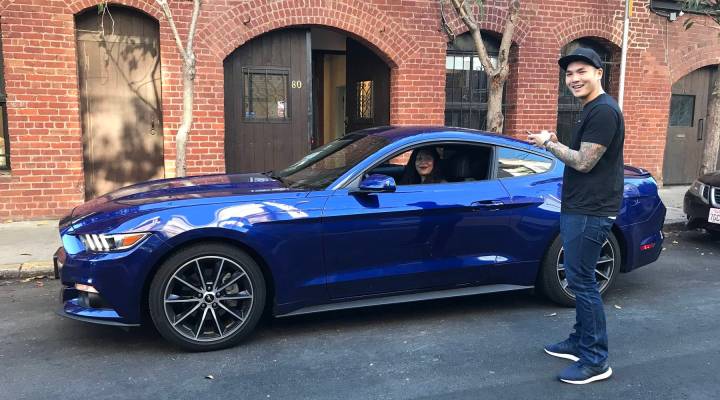 COPY
Canvas is a subscription service that lets drivers rent Ford and Lincoln vehicles by the month.  Photo courtesy of Ford

Canvas is a subscription service that lets drivers rent Ford and Lincoln vehicles by the month.  Photo courtesy of Ford
Listen Now

Of the 17 million cars expected to be sold in the U.S. this year, about a third are leased. The rest are purchased. But there’s a new option for drivers coming on strong in 2018 – car subscriptions.

Los Angeles resident Jeremy Irvine has been driving a Ford Focus hatchback for the last five months, but he doesn’t own or lease it. He subscribes to his car with a service called Canvas.

“I figured out at 38 years old that I’m not a car person,” Irvine said.

Irvine is one of a small but growing number of people who need a car but would rather not own one. So they’re subscribing – paying a monthly fee to access a variety of vehicles they can change up when they want. The flat fee varies depending on the company, from about $400 per month to as much as $3,700, and usually includes maintenance, insurance, roadside assistance, pickup and drop-off. And in most cases the subscription can be ended at any time.

“The market’s tiny today,” said David Liniado with Cox Automotive. His company is part owner of a vehicle subscription service called Flexdrive that will be available in 23 cities by the end of this year.

More and more car companies are offering subscriptions, like BMW and Mercedes, both of which announced new car subscription pilot programs in Nashville earlier this year. Mercedes is also piloting its subscription service in Philadelphia.

There’s also Care by Volvo which launched nationwide in March for one of its new compact vehicles, and Lincoln, which, as part of Ford Motor Co., is also offering a subscription service through Canvas.

But Cadillac was one of the first companies to offer car subscriptions. Book by Cadillac started in November 2017, and now gives drivers in LA, New York and Dallas access to a selection of Caddys and the option to exchange them up to 18 times per year.

“We felt it was really important to offer another way to access a luxury vehicle,” said Melody Lee, global director for Cadillac’s $1,800-per-month subscription service.

“Easily, the number one downside to a subscription is the cost,” said Rebecca Lindland, an executive analyst with Kelley Blue Book. “Flexibility comes at a price.”

But owning a car comes with its own monthly costs. The American Automobile Association estimates it costs American drivers an average of $706 per month for a new vehicle, including things like depreciation, maintenance and fuel.

Lee, with Cadillac, said people are looking for the kind of flexibility that a subscription offers.

“Today’s more traditional methods are financing and leasing,” she said, “but we felt that in looking at the landscape of other industries and the way that consumers are choosing to access products and services, subscription is one that seems to be very popular.”

In other words, just as people subscribe to movies and TV shows through Netflix they can now drive, insure and exchange a car without owning it.