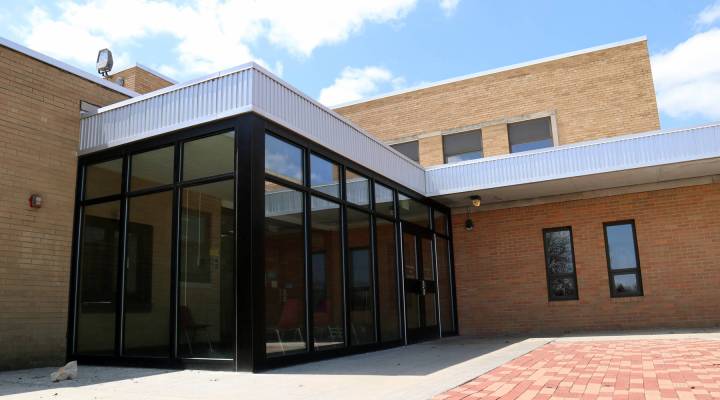 COPY
This glass and steel vestibule at the entrance to Norton Middle School in Norton, Ohio is designed to prevent people from entering the building without authorization. Adrian Ma for Marketplace

This glass and steel vestibule at the entrance to Norton Middle School in Norton, Ohio is designed to prevent people from entering the building without authorization. Adrian Ma for Marketplace
Listen Now

In the weeks following the deadly mass shooting at Marjory Stoneman Douglas High School in Parkland, Florida, there’s been a lot of talk about how such a tragedy might be prevented from happening again. And although much of the discussion has centered around guns, the anxiety over school shootings is also feeding a growing industry for school security products and services.

Take, for example, the public schools in Norton, Ohio, a city of about 12,000 people. You don’t just walk into a Norton school; there’s a protocol. Before you enter the middle school building, for instance, you have to pass through what’s called a “secured vestibule.” Basically, it’s a glass and metal box with one way in, and one way out.

On a recent weekday, Superintendent Dana Addis demonstrated the system by walking into the enclosure, and pressing the button on an intercom, which beeped out a cheerful jingle. A camera lets a staff member see who’s there, and if everything looks okay, he or she can press a button to remotely unlock the interior doors.

“One of the most important things that we’ve done as a result of Parkland, is we have totally secured all of the entrances to our four buildings,” Addis said.

That wasn’t always the case, he said. Until recently, the elementary school had no vestibule. He and the school board were planning to wait until summer break to add one, he said, but then, in February, the Parkland shooting happened. That kickstarted the project sooner than expected; six weeks and about $12,000 later, the elementary building had its own new vestibule. However, the security measures won’t stop at the front door, Addis said. The school board is also considering buying devices that would allow staff and students to barricade doors inside the building, too.

But with all the classrooms, offices, and other spaces, there are about 250 doors districtwide, and securing them all could cost almost $30,000.

Bolo Stick is one of many door-barricading devices aimed at the school market. Made in Ohio, the steel peg and bracket combo sell for $59 a piece.

“School districts have to work to see are these devices actually ones that will work?” Addis said. “Are we running into any companies that simply are taking advantage of a time to make some money?”

Since the Parkland shooting, Addis said he has received a couple of emails a week from companies selling this gadget or that service, all promising to make his schools safer.

“Whether it’s Virginia Tech, or Columbine, or Sandy Hook, or now Parkland, there tends to be a big spike in interest,” said Robin Hattersley, executive editor at Campus Safety Magazine, a trade publication for security professionals. Every time there’s a high-profile shooting, she said, there is usually a bump in sales for a lot of different products such as video surveillance cameras, locks, metal detectors, two-way radios, and emergency notification systems.

Yet, because some of these products may be relatively new, they may also be relatively untested in real world conditions. For example, following the Virginia Tech massacre in 2007, “there were a lot of emergency notification providers that came into the marketplace,” Hattersley said. “And what we found with some … particularly the text messaging providers, is a lot of times the messages didn’t get through.”

On top of purchasing products, many school districts are hiring school safety consultants who specialize in everything from assessing a building’s architecture to conducting active shooter drills. And this, according to Jim Dearing, an economist at the research firm IHS Markit, is a uniquely American specialty.

“We don’t have that in other parts of the world,” Dearing said. “I think it’s a symptom of the size of the market.” Taken together, school security products and services add up to a $2.7 billion industry in the United States, he said.

“The U.S. spends a lot more per capita on security than any other country,” Dearing said. What’s more, he predicts the school security market will continue to grow about 1 percent per year through 2021.

A $3,000 cloud-based kiosk made by schoolSAFEid, an Oklahoma-based software company that specializes in visitor management systems for K-12 schools.

One person adding to that growth is J.R. Suppes, who sells school safety equipment from his office in North Canton, Ohio. A former school administrator, Suppes today heads up an educational consulting company called DriveMind Group. Over half the company’s revenue comes from selling safety products to schools, he said.

His product line includes a door-barricading device ($59), a cloud-based visitor kiosk that screens for registered sex offenders ($3,000), and an app that lets school staff monitor social media and receive anonymous tips. In the year or so since Suppes started DriveMind, he said he’s never really had to give the hard sell.

“Instead of having to go find customers,” he said, “we were getting people coming to us.”

One reason may be that Ohio is no stranger to school shootings; there have been five in the state since 2012. But schools have limited budgets. So, even if parents and administrators want to see increased security, school districts might not have the money.

Each of those positions would add another dimension of safety to the school, he said. But of course, their salaries would cost money too.

Ideastream’s Adrian Ma is with the Marketplace Hub in Cleveland.

Correction (May 10, 2018): A previous version of this article incorrectly stated the price of the Bolo Stick, the text has been corrected.